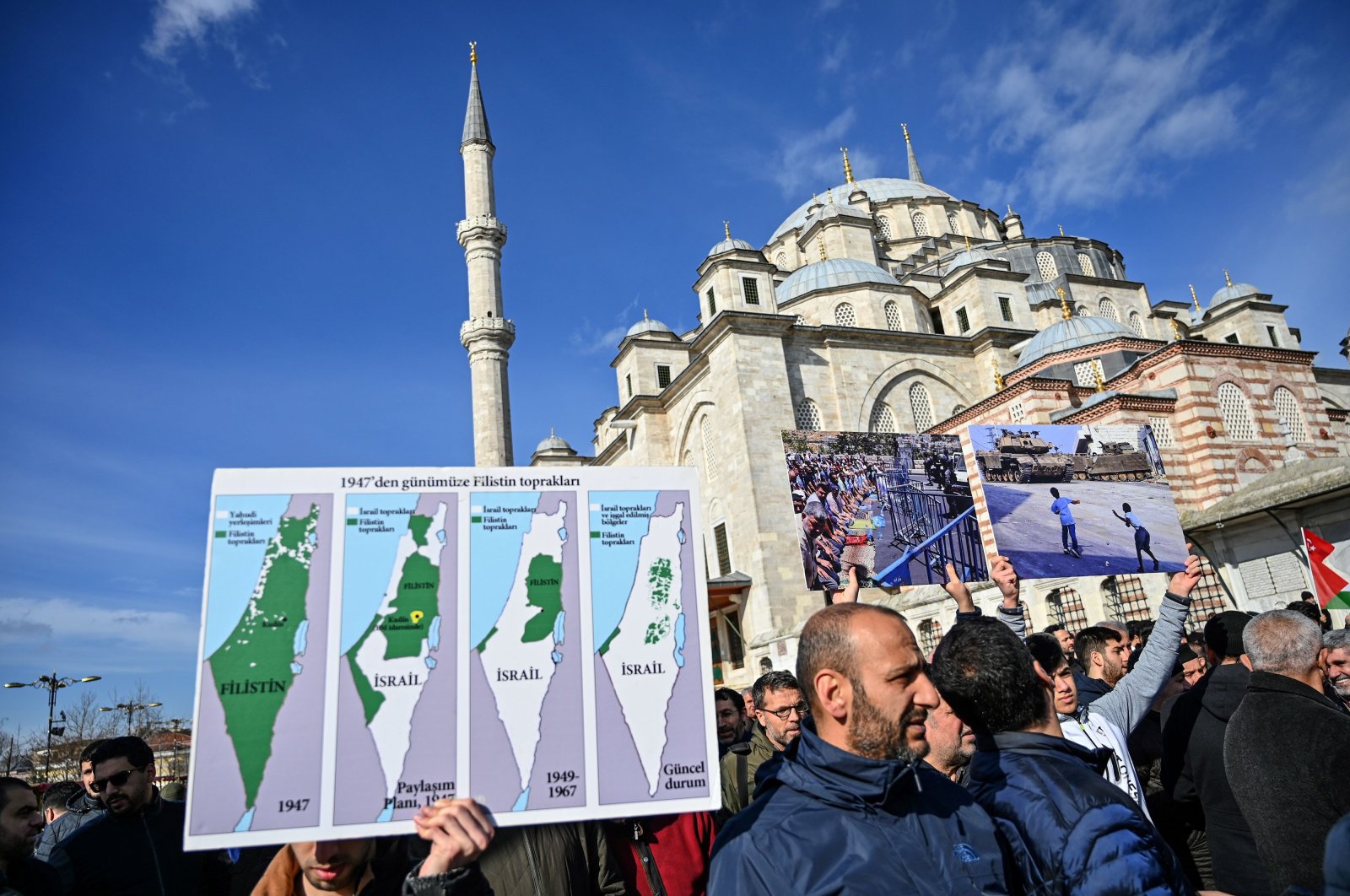 A protester holds up a chronological map of Palestine during a demonstration at Fatih Mosque to protest the so-called U.S. peace plan, in Istanbul, Turkey, Jan. 31, 2020. (AFP)
by DAILY SABAH WITH AGENCIES Sep 24, 2020 1:15 pm
RECOMMENDED

Polls will be scheduled within six months under a deal reached between Fatah leader Mahmud Abbas and Hamas political chief Ismail Haniyeh.

"We have agreed to first hold legislative elections, then presidential elections of the Palestinian Authority, and finally the central council of the Palestine Liberation Organization," said Jibril Rajub, a senior Fatah official.

The last Palestinian parliamentary elections were held in 2006 when Hamas won by an unexpected landslide.

Saleh al-Arouri, a top Hamas official, said the deal was reached during meetings held in Turkey.

"This time we reached a real consensus," he said, speaking to AFP by phone from Istanbul.

"Divisions have damaged our national cause and we are working to end that," Arouri added.

Previously, a top member of Fatah on Thursday said that ongoing talks in Turkey with its longtime rival Hamas have been "positive, fruitful and productive."

"The dialogue is an important step toward reconciliation and partnership, and unifying the Palestinian stance in the light of the consensus on rejecting all the liquidation projects against the Palestinian cause," Hussein al-Sheikh, a member of Fatah's Central Committee, wrote on Twitter.

Separately, Munir al-Jaghoub, who heads Fatah's information office, told Anadolu Agency (AA) that a senior Fatah delegation will head to the Qatari capital Doha and then to Cairo, Egypt.

Al-Jaghoub added that the delegation will discuss several topics with the leadership of both countries, including Palestinian reconciliation, the recent normalization deals between two Gulf states and Israel and other political developments.

Hamas and Fatah have remained bitter rivals since 2007 when the former wrested the Gaza Strip from the latter after days of street fighting.

During a meeting on Sept. 3, Hamas and the Palestinian Authority (PA) – in which Fatah holds sway – agreed on a host of issues, including healing their rift and upholding the principle of a peaceful transfer of power through elections based on proportional representation.

The talks come days after the United Arab Emirates (UAE) and Bahrain signed agreements brokered by the U.S. to establish diplomatic relations with Israel.

In the wake of these deals, on Sept. 15, Palestinian factions sought to restore unity against Israel and mend political divisions.

The PA and Hamas agreed to form a joint leadership group called the “Unified National Leadership for Popular Resistance,” comprised of all factions, to ensure a “comprehensive popular resistance” against the Israeli occupation.