'People of Kashmir grateful to President Erdoğan for his UN speech' 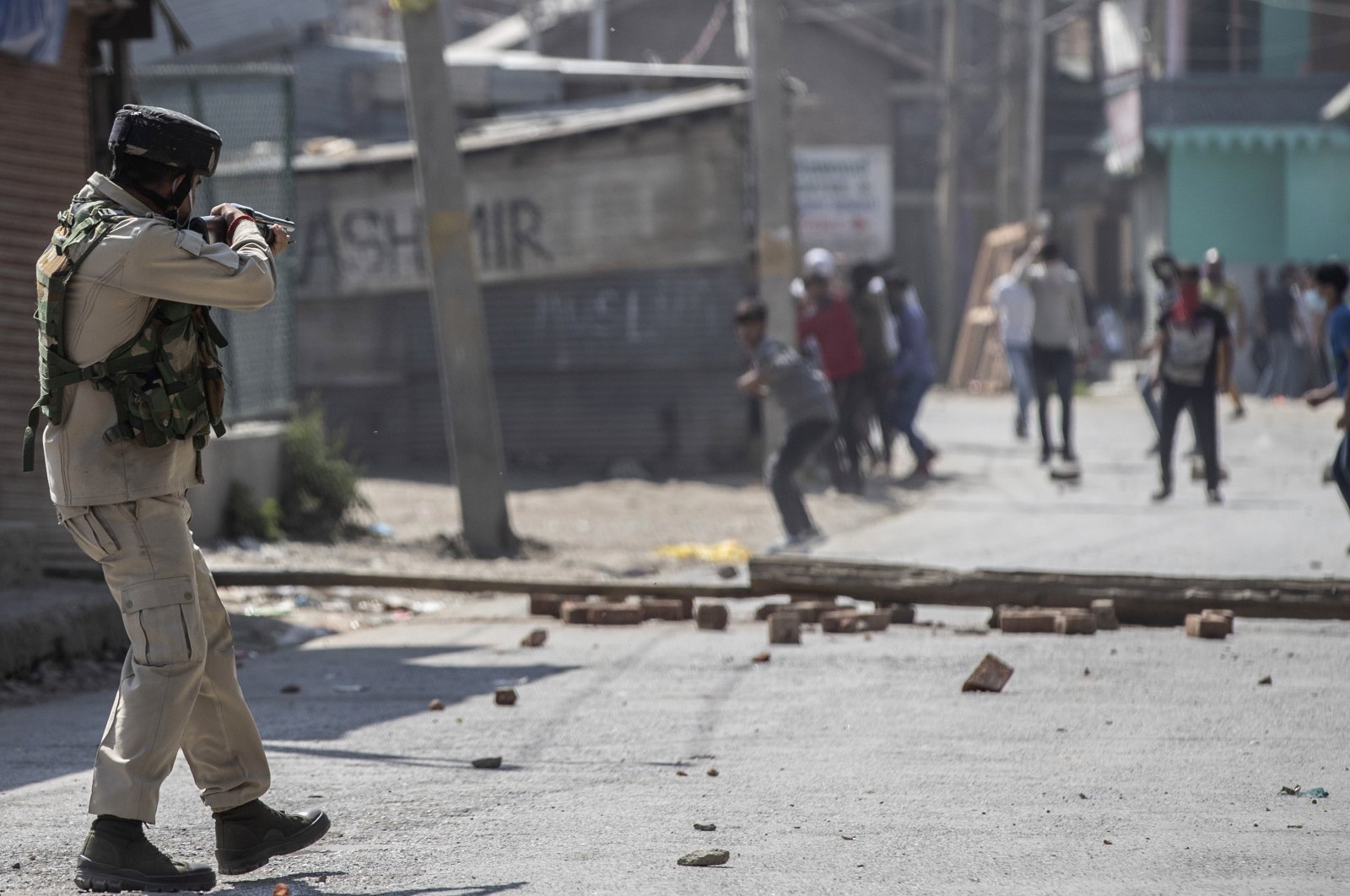 An Indian paramilitary soldier aims his pellet gun on Kashmiri protesters marching on the streets in solidarity with rebels engaged in a gunbattle with soldiers, in Srinagar, Indian controlled Kashmir, Sept. 17, 2020. (AP Photo)
by DAILY SABAH WITH AA Sep 23, 2020 2:16 pm
RECOMMENDED

The people of Jammu and Kashmir have no words to express their heartfelt thanks to Turkish President Recep Tayyip Erdoğan for reiterating once more his country’s support for the just cause of Kashmir, said Ghulam Nabi Fai, secretary-general of the U.S.-based World Kashmir Awareness Forum, on Wednesday.

Fai said Erdoğan's words on Tuesday at the 75th session of the U.N. General Assembly have become a source of inspiration and gave hope to the millions of hopeless people in the region. Erdoğan's statement at the General Assembly was the true reflection of the aspirations of the people of Kashmir, he added in an opinion piece published by Anadolu Agency (AA).

Erdoğan had said: "The Kashmir conflict, which is also key to the stability and peace of South Asia, is still a burning issue. Steps that were taken following the abolition of the special status of Jammu-Kashmir further complicated the problem. We are in favor of solving this issue through dialogue, within the framework of the U.N. resolutions and especially in line with the expectations of the people of Kashmir."

Fai also reiterated that Erdoğan's statement today was consistent with his statement made in May 2017 during an interview with the Indian TV channel WION: "We should not allow more casualties to occur and by strengthening multilateral dialogue, we can be involved, and through multilateral dialogue, I think we have to seek out ways to settle this question (Kashmir) once and for all."

Fai underlined the consistency between Erdoğan’s remarks and U.N. General Assembly President Volkan Bozkır’s remarks as both emphasized the importance of multilateral dialogue. Bozkır had said that multilateralism is not an option but a necessity.

“Bilateralism has indeed failed in resolving the Kashmir conflict. The mantra has been repeated by some world powers that they have no alternative but to rely on bilateral talks between India and Pakistan to achieve a settlement. The experience of more than 70 years is ignored. No bilateral talks between India and Pakistan have yielded agreements without the active role of an external element,” Fai explained.

The sustained and coordinated diplomatic persuasion by “peace-loving democratic powers” is the missing element, said Fai, adding that the vision of Erdoğan needs to be pursued by the U.N. and other international actors.

“Turkey can play an effective role in bringing parties together, being friendly to both India and Pakistan,” he also said.

He said that the U.N. has two choices: “One is to continue confining itself to warning both Pakistan and India against going to war with each other. This policy bases the no‑war prospect in South Asia on a very precarious foundation. The prospect of a nuclear exchange in that vast Subcontinent cannot be dismissed in the event of hostilities breaking out between the two countries. The second option is to play a more activist, mediatory role regarding Kashmir as suggested by President Erdoğan.”

This can take the shape of a multilateral dialogue or appropriate use of the newly developed procedures and mechanisms at the U.N., Fai said and added that the U.N. would supply the catalyst that is needed for a settlement.

On the other hand, India reacted against Erdoğan’s remarks. T. S. Tirumurti, the permanent representative of India to the U.N., said on his Twitter account: “We have seen remarks by President of Turkey on Indian UT of Jammu & Kashmir. They constitute gross interference in India’s internal affairs and are completely unacceptable. Turkey should learn to respect sovereignty of other nations and reflect on its own policies more deeply.”

Long-fraught relations between the two South Asian nuclear rivals, India and Pakistan, have further flared up after India scrapped the special provisions of the state of Jammu and Kashmir in August last year.

Some Kashmiri groups have been fighting against Indian rule for independence or for unification with Pakistan.