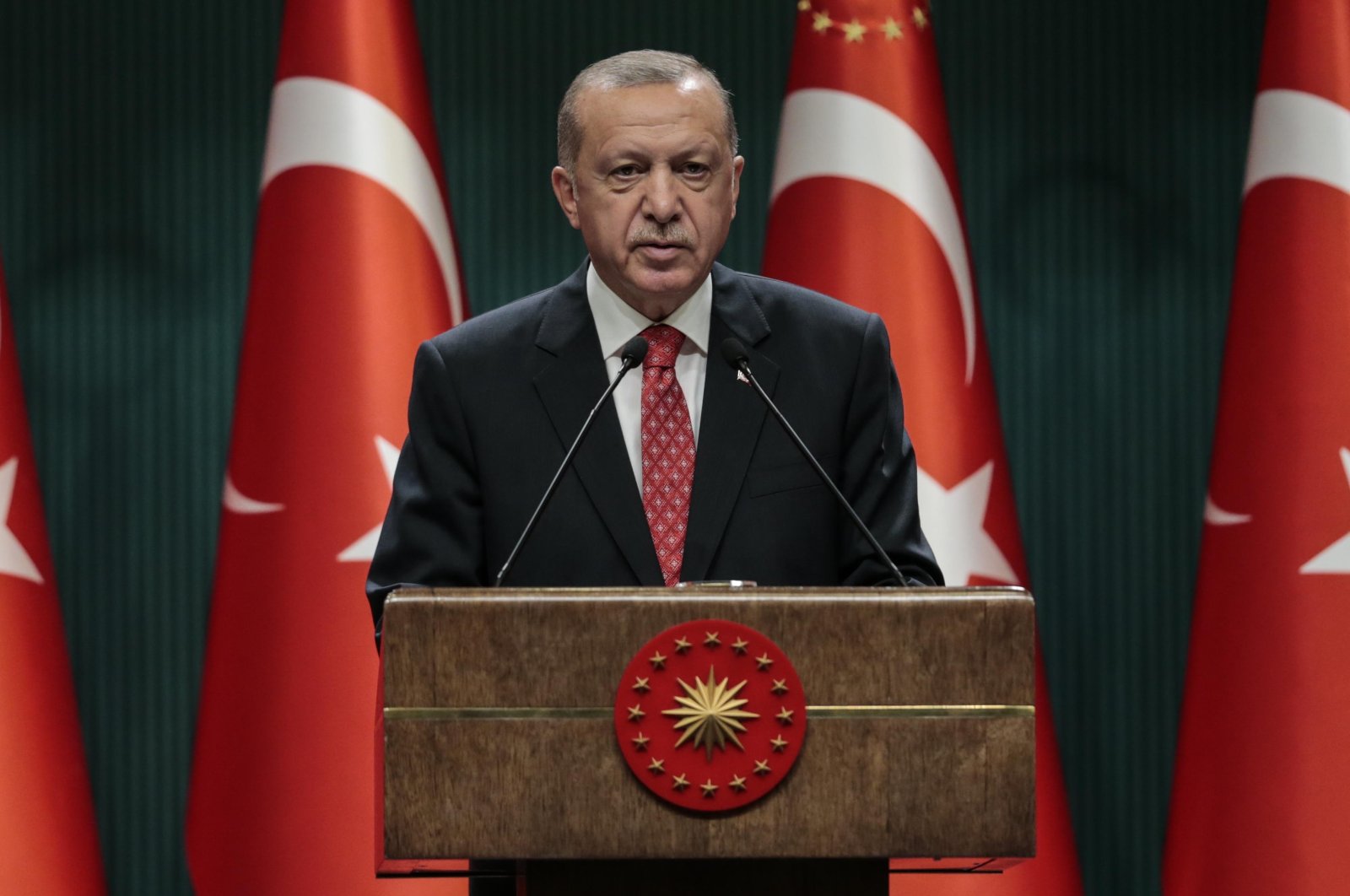 President Recep Tayyip Erdoğan speaks to members of the press after a cabinet meeting at the Presidential Complex in Ankara on August 10, 2020. (AA Photo)
by DAILY SABAH WITH AGENCIES Aug 10, 2020 7:42 pm
RECOMMENDED

President Recep Tayyip Erdoğan on Monday called on Mediterranean countries to cooperate in finding an acceptable formula that protects the rights of all.

“Turkey is always ready to resolve the Eastern Mediterranean issue through dialogue on equitable basis,” Erdoğan said, noting: “Let all the countries in the Mediterranean come together, and let’s find a formula that is acceptable to everyone and protects everyone’s rights.”

“No way Turkey would consent to any initiative trying to lock the country out of its shores, ignoring vast swathes of Turkish territory,” he also added.

Erdoğan, speaking following a Cabinet meeting, underscored that Turkey was not eyeing anyone’s legitimate interests, but that Greece has signed an agreement with Egypt that had no legal basis.

He stressed that, by signing this agreement while Turkey had halted operations in the area in a sign that Ankara was open to dialogue, Athens acted with no good faith.

Erdoğan continued to compare Ankara's determination with the economy and energy, claiming: “We will continue to fight for the independence of our country in energy."

Turkey has consistently contested the Greek Cypriot administration's unilateral drilling in the Eastern Mediterranean, asserting that the Turkish Republic of Northern Cyprus (TRNC) also has rights to the natural resources in the area. Turkey's plans for Oruç Reis to search for hydrocarbons off the island of Kastellorizo (Megisti-Meis) had infuriated Athens last month. Later, Ankara agreed to suspend "for a while" the search off the Greek island pending the outcome of negotiations with Athens and European Union heavyweight Germany.

Turkish drilling procedures in the Eastern Mediterranean fall into two categories: Areas licensed by the Turkish Republic of Northern Cyprus (TRNC) for Turkish activities and the licensed areas that are issued by Turkey to the Turkish Petroleum Corporation (TPAO) – Turkey's national oil company.

Last week, Athens and Cairo signed an agreement to set up an exclusive economic zone (EEZ) in the region.

The Turkish Foreign Ministry said the "so-called maritime deal" was "null and void."

The agreement between Turkey and Libya determined maritime sovereignty based on international law as 186,000 square kilometers (71,815 square miles). Thus, the possibility of making an EEZ agreement between Greece and Egypt, and Greece and Greek Cyprus, was eliminated. The maritime pact asserted Turkey’s rights in the Eastern Mediterranean in the face of unilateral drilling by the Greek Cypriot administration, clarifying that the Turkish Republic of Northern Cyprus (TRNC) also had rights to the resources in the area. The pact took effect on Dec. 8.

Erdoğan went on to say that economic indicators had started to show recovery following the normalization process that Turkey entered following the hiatus brought to bear by the coronavirus.

"Turkey's economy has been affected, of course, negatively in the short term,” Erdoğan said, noting that thanks to the measures put in place and the country’s experience with such shock waves, however, along with strong health infrastructure, the economy had entered a quick pace of recovery.

Erdoğan highlighted that the country had quickly introduced and gradually expanded a stimulus package to protect citizens, employers, employees, companies and tradesmen from the economic fallout.

“The improvement we expected in economic indicators started in May and we see that those were further strengthened in June and July,” he said.

Erdoğan stressed that the Purchasing Managers Index rose from 33.4 in April to 82.2 in July, reaching its highest level since February 2011.

The country’s exports have increased steadily after April and reached the highest level of this year with 15 billion dollars in July, Erdoğan said, noting: "In this period, the ratio of exports to meet imports rose from 66.2% to 84.5%.”

Speaking on the banking sector’s position during the pandemic, Erdoğan said: "Despite an acceleration in loan growth, our banking sector looks very healthy with its strong capital structure, asset quality and profitability ratios. The sector's capital adequacy ratio, which is 19.5%, is well above the legal minimum ratio of 8%.”

The president underlined that Turkey's economy is now a production-based economy rather than a consuming one which is more integrated into global value chains with export-oriented strong structure.

He underlined that the country would continue to prove its place in global supply chains with high value-added products in post-pandemic.

In the wake of the pandemic, which is not just a health crisis, but an economic one, Erdoğan stressed that the world was trying to reduce the latter fallout by adapting with monetary and fiscal policies and that economic recovery was expected to take time despite all these measures.

Underscoring that global supply chains and international trade had been disrupted due to the pandemic, Erdoğan explained that this brought about a halt in production and slowed down in many facilities.

International organizations have also revised their global growth forecasts, which Erdoğan referred to as “with a better understanding of the shocking impact of the pandemic.”

The International Monetary Fund (IMF) increased its contraction expectation for 2020 from 3% to 4.9%, while the OECD's expectation of contraction for this year was 2.4%, it revised it to 7.6%.