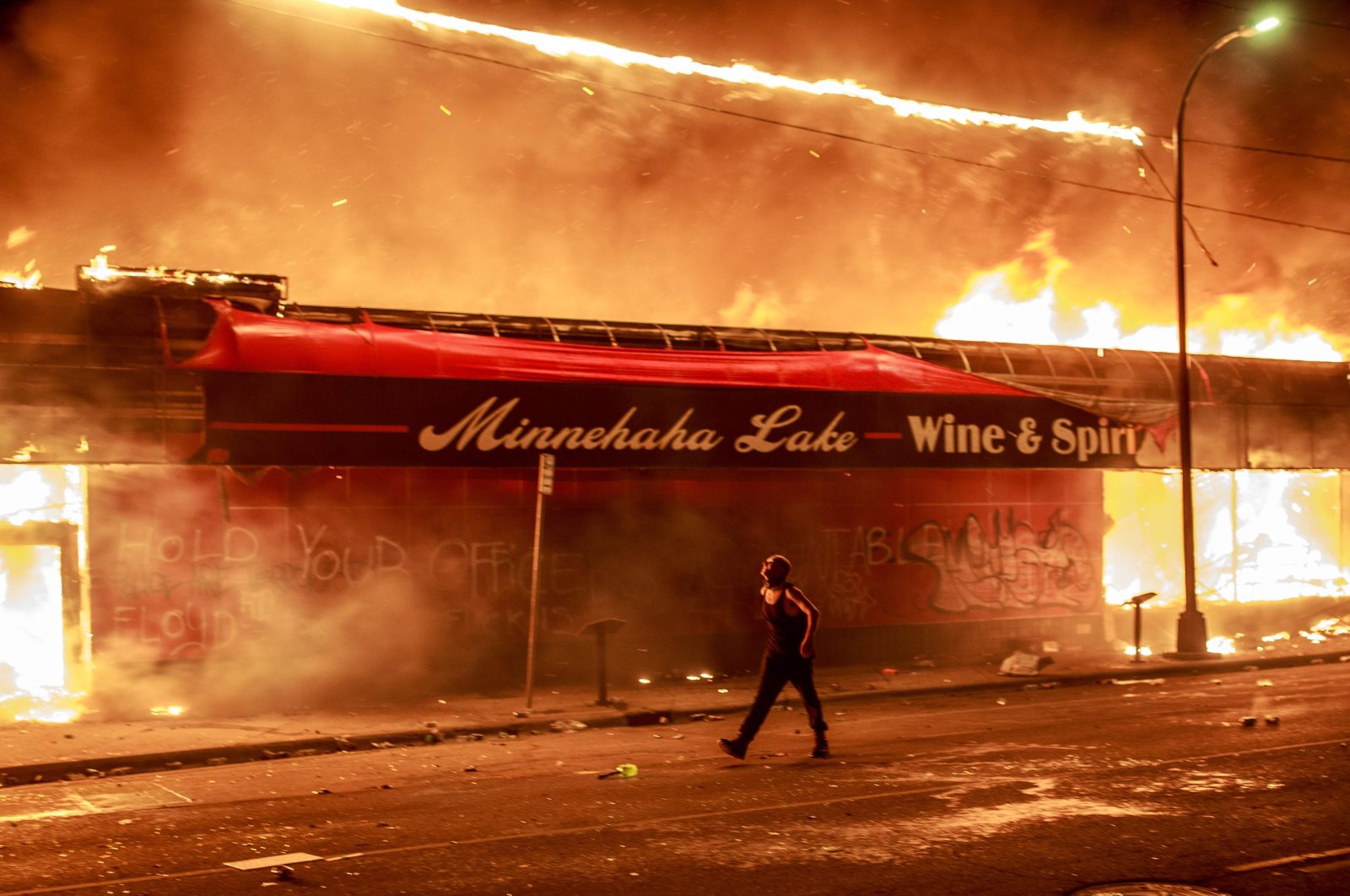 A man walks past a liquor store in flames near the Third Police Precinct during a protest over the death of George Floyd, an unarmed black man, who died after a police officer kneeled on his neck for several minutes, Minneapolis, Minnesota, May 28, 2020. (AFP Photo)
by DAILY SABAH May 29, 2020 12:33 pm
Edited By Sinan Öztürk
RECOMMENDED

President Recep Tayyip Erdoğan offered his condolences Thursday to the family of George Floyd, a handcuffed black man who died after pleading for air as a white police officer kneeled on his neck. The incident sparked angry demonstrations across the United States.

"I believe that the perpetrators of this inhumane act shall receive the punishment they deserve. We will be monitoring the issue," Erdoğan said on Twitter.

"I remember with respect George Floyd and extend my condolences to his family and loved ones," he added.

Floyd, 46, was arrested Monday in Minneapolis, Minnesota, after reportedly attempting to use a counterfeit $20 bill at a local store.

Protests first erupted Tuesday, a day after Floyd's death in a confrontation with police captured on widely seen citizen video. In the video, Floyd can be seen pleading as Officer Derek Chauvin presses his knee against him. As the minutes pass, Floyd slowly stops talking and moving.

The president said "the racist and fascist approach" that caused Floyd's death by torture deeply saddened everyone, "but it has also become one of the most painful manifestations of the unjust order we stand against across the world."

"As a member of the Islamic civilization, which teaches us to love humankind because of the Creator, I condemn this inhumane mentality," Erdoğan said, adding that Turkey always has taken a stand against all attacks targeting humanity, regardless of where the cause or form in which they are committed.

He added that Turkey will continue to fight to protect the rights of all humanity without any discrimination based on any differences.

Earlier Thursday, dozens of businesses across the Twin Cities boarded up their windows and doors in an effort to prevent looting, with Minneapolis-based Target announcing it was temporarily closing two dozen area stores. Minneapolis shut down nearly its entire light-rail system and all bus service through Sunday out of safety concerns.

In St. Paul, clouds of smoke hung in the air as police armed with batons and wearing gas masks and body armor kept a watchful eye on protesters along with one of the city’s main commercial corridors, where firefighters also sprayed water onto a series of small fires. At one point, officers stood in line in front of a Target, trying to keep out looters, who were also smashing windows of other businesses.

Hundreds of demonstrators returned Thursday to the Minneapolis neighborhood at the center of the violence, where the nighttime scene veered between an angry protest and a street party. At one point, a band playing in a parking lot across from the Third Precinct broke into a punk version of Bob Marley's “Redemption Song." Nearby, demonstrators carried clothing mannequins from a looted Target and threw them onto a burning car. Later, a building fire erupted nearby.

But elsewhere in Minneapolis, thousands of peaceful demonstrators marched through the streets calling for justice.

Floyd's death has deeply shaken Minneapolis and sparked protests in cities across the U.S. Local leaders have repeatedly urged demonstrators to avoid violence.