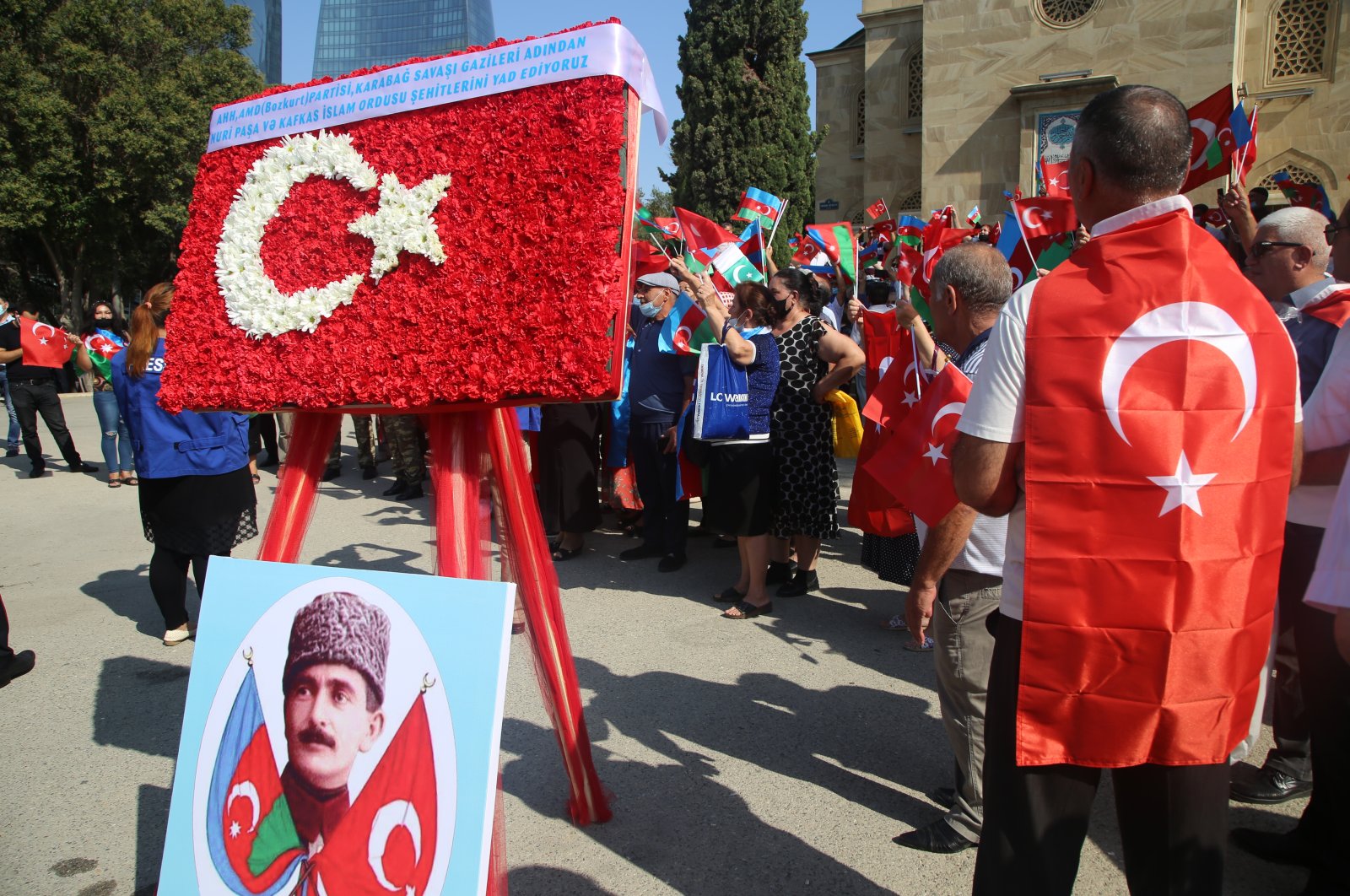 On the occasion of the 102nd anniversary of Baku's liberation, a ceremony was organized at the Turkish martyr's cemetery in Baku, Azerbaijan, Sept.15, 2020 (AA Photo)
by DAILY SABAH Sep 15, 2020 3:22 pm
Edited By Dilara Aslan
RECOMMENDED

President Recep Tayyip Erdoğan on Tuesday congratulated the people of Azerbaijan and their leader on the 102nd anniversary of the liberation of the capital Baku from Armenian and Bolshevik occupation.

The president remembered the Caucasian Islamic Army, under the leadership of Nuri Pasha, and the Azerbaijani national army that won a historic victory, as well as all the fallen soldiers and heroes during this battle.

Erdoğan underlined that the unity, solidarity and cooperation between Turkey and Azerbaijan put forth against threats toward their existence and vital interests are an example and a message to the world.

Reiterating that both countries are determined to deepen and enhance relations in all aspects under the notion "One nation, two states," Erdoğan said Turkey will always be on Azerbaijan's side with great support.

The friendly political, legal, commercial and military relations between Azerbaijan and Turkey were documented shortly after the foundation of the Azerbaijani Democratic Republic on May 28, 1918, with the Treaty of Batumi, signed between the newly established country and then-Ottoman Empire on June 4, 1918.

With the treaty, the empire recognized the independence of Azerbaijan, which could in turn request the empire's military help in case of any threat.

After the republic proclaimed independence in Georgia, Fatali Khan Khoyski, Azerbaijan's first prime minister, formed the government in Ganja, now northwestern Azerbaijan, in June as he was not able to travel directly to Azerbaijan's current capital Baku as the city was then controlled by Armenian militants and Bolsheviks.

On Sept. 15, 1918, an elite Ottoman force called the Caucasian Islamic Army under the leadership of the 29-year-old Nuri Pasha (Killigil) was sent by then-Minister of War Enver Pasha to what is today Azerbaijan in the closing months of the World War I in response to a plea from the region's people.

The Caucasian Islamic Army, made up of Azerbaijani and Turkish soldiers, completed its mission in September, liberating Baku and thus laying the groundwork for the country's independence decades later in 1991.

Over 1,100 Caucasian Islamic Army martyrs sacrificed their lives together with the Azerbaijani people for this cause.

The liberation of Baku at the time paved the way for the transfer of the capital from Ganja and ensured the territorial integrity of Azerbaijan, providing the basis for its modern-day boundaries.