Protesters arrested in Armenia amid outrage over Nagorno-Karabakh failure 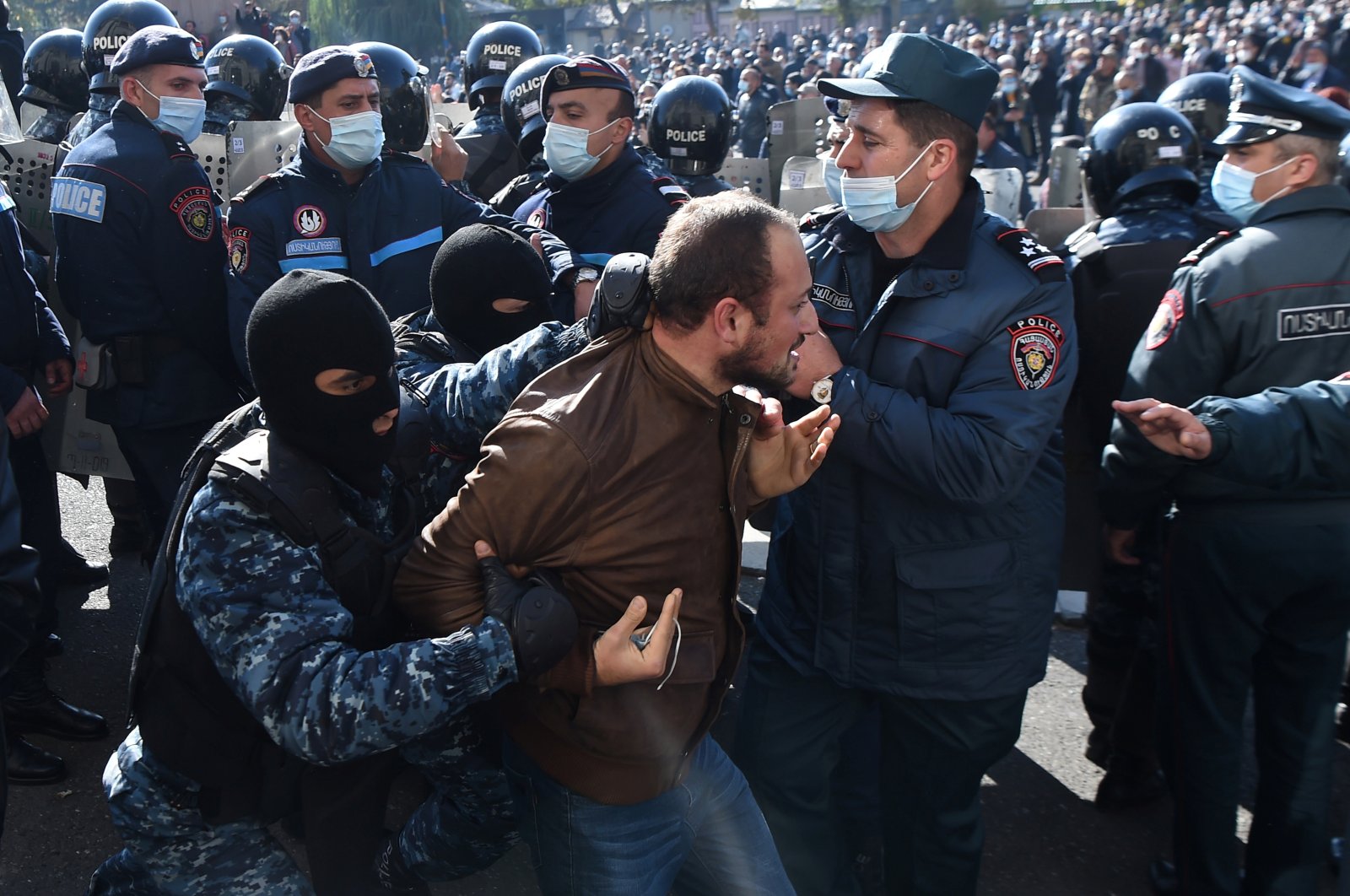 A man is taken away by law enforcement officers during an opposition rally to demand the resignation of Armenian Prime Minister Nikol Pashinyan following the signing of a deal to end the military conflict over the Nagorno-Karabakh region, in Yerevan, Armenia Nov. 11, 2020. (REUTERS)
by daily sabah with afp
Nov 11, 2020 1:14 pm

Armenian police arrested protesters in the capital Yerevan on Wednesday as anger mounted over Prime Minister Nikol Pashinian's decision to sign a peace deal with Azerbaijan, accepting defeat over the Nagorno-Karabakh region.

An Agence France-Presse (AFP) correspondent at the scene said hundreds of protesters had gathered in central Yerevan shouting "Nikol the traitor," adding that police had detained demonstrators including high-profile opposition figure, Gagik Tsarukyan.

Pashinian announced the Russian-brokered peace agreement with Azerbaijan in the early hours of Tuesday, ending more than six weeks of intense fighting that left more than 1,400 dead and displaced tens of thousands.

"You will not be able to stop the whole country," a member of the Prosperous Armenia party, Arman Abovyan, shouted through a megaphone to protesters who had rallied despite a ban imposed on public gatherings while martial law was in place.

Under the terms of the agreement, Azerbaijan's forces will retain control over areas seized in the fighting, including the key town of Shusha, while Armenia agreed to a timetable to withdraw from large parts of Nagorno-Karabakh.

Russian President Vladimir Putin announced earlier Tuesday that the two former Soviet republics have signed an agreement to end the conflict in Nagorno-Karabakh. Azerbaijani President Ilham Aliyev hailed the agreement as a victory for his country, saying Baku's military success enabled it to gain an upper hand to end the three-decadelong occupation of its territory.

However, reactions from within Armenia were at the opposing end of the spectrum, with people flocking the streets in protest, even attacking the parliament.

Chaotic scenes erupted inside Armenia's parliament in the early hours of Tuesday as angry protesters seized control of its chamber to denounce the country's leadership and attacked the parliament speaker.

Hundreds of people stormed the building after Prime Minister Nikol Pashinian announced the agreement to end six weeks of fighting over Nagorno-Karabakh.

Many gathered inside its inner chamber, taking the seats of parliamentarians and shouting "resign!" or "out!" Arguments and scuffles broke out as protesters tried to take to the podium to speak and were shouted down, with some throwing bottles.

The few police present did little to prevent the disorder and people roamed the hallways, where doors had been opened and the contents of offices thrown about.

Thousands of protesters had earlier gathered outside the government headquarters in Yerevan and stormed the building, ransacking offices and breaking windows.

Local media reports said parliament speaker Ararat Mirzoyan had been attacked and beaten. The crowds grew smaller as the night wore on but some protesters remained inside parliament.

Pashinian called on protesters to go home, writing on Facebook: "At this difficult time we must stand shoulder to shoulder."

Relations between Azerbaijan and Armenia over Nagorno-Karabakh have remained tense since 1991, but fresh clashes broke out on Sept. 27.

Armenia repeatedly attacked Azerbaijani civilians and forces for over 40 days, even violating three humanitarian cease-fire agreements. Besides other towns and villages, Baku's liberation of the strategic city of Shusha on Sunday had signaled that victory was imminent.