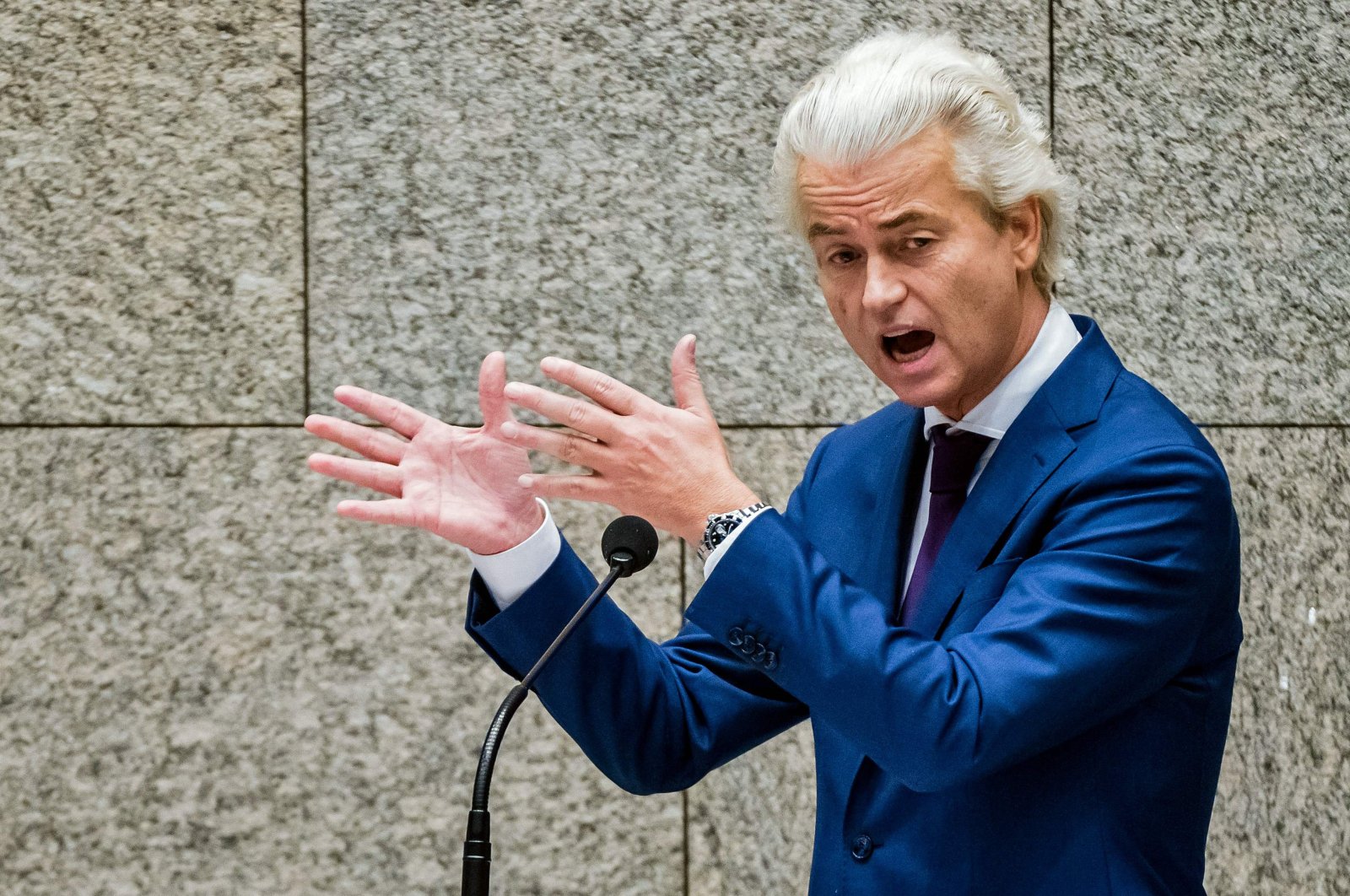 Leader of the Dutch far-right Party for Freedom (PVV) Geert Wilders speaks during a debate over developments surrounding the COVID-19 outbreak, during a plenary session in the House of Representatives in The Hague on Oct. 14, 2020. (AFP Photo)
by Daily Sabah with Wires
Oct 25, 2020 11:16 am

The xenophobic and Islamophobic Dutch politician Wilders shared a derogatory cartoon insulting President Erdoğan, and responses from Turkish officials were quick to come

Dutch far-right politician Geert Wilders has come under fire for sharing a defamatory cartoon of Recep Tayyip Erdoğan on social media, as the Turkish president himself, Foreign Minister Mevlüt Çavuşoğlu and other high-ranking Turkish officials slammed the racist lawmaker Sunday.

"There is this so-called Dutch deputy (Geert Wilders) who speaks ill of us. Unlike him, we don't condone racism, and fascists have no place in Turkey," Erdoğan said.

Wilders shared the cartoon, which portrays a likeness of Erdoğan wearing a bomb-shaped hat bearing the logo of the ruling Justice and Development Party (AK Party) on his head, along with the headline "terrorist."

"The racist losers of Europe have shown their true colors when faced with reality," Çavuşoğlu said.

"They are trying to take advantage of the Islamophobia and xenophobia. It is high time we said stop to the fascist, spoiled politicians of Europe," he added.

"Europe is an increasingly dangerous place for Muslims. The dog-whistle politics of offensive caricatures, accusations of separatism against Muslims and mosque raids isn’t about freedom of expression," he said.

"It’s about intimidating and reminding Muslims that they are welcome to keep the European economy going, but they will never belong — against the backdrop of lectures about integration. Everything we see about Muslims in European public culture today is eerily familiar to the demonization of the European Jewry in the 1920s," Altun added.

"Some European leaders today do not just target Muslims in their midst. They attack our sacred values, our scripture, our prophet and our political leaders — our way of life," he said, adding that the racist-motivated attacks are also against the religion of Islam itself.

"Europe’s hostility toward Muslims and efforts to ‘discipline’ them is inseparable from the increasingly widespread hostility towards Islam, Turkey and our president, Recep Tayyip Erdoğan," Altun concluded.

"Wilders is prisoner to his dirty rhetoric. He is a shame to humanity. We hope the Dutch, who belong to the civilized world, will do what’s necessary," he said, expressing his hopes that the far-right lawmaker won’t be elected again in the next Dutch elections.

"Despicable, enemy of humanity and fascist ... It is a duty to fight these despicable fascists," he said.

"Humanity is not found in whatever they might say. The only reason they are attacking our president is that he stands with the oppressed in the name of humanity, without compromise," Çelik added.

"We are proud that our president is attacked by these fascists that are enemies of humanity. Because they are enemies to anyone fighting for humanity. It is the worst shame of all to be one of the people praised by them," he added.

Attacks by fascists like Wilders against Erdoğan hint at their aim to "spill the blood of the oppressed in Syria and Libya and do what Adolf Hitler did to Jews to these oppressed people," Çelik added.

"Do not bother to remind this fascist Dutch of the European values because they don't exist anymore. The mindset that rules Europe is on the same page with this racist man," he said.

"Let’s cherish our own values, to not allow hostility against Turks and Islam. That’s when this scum will lose," he said.

"Europe is being tested with the so-called leaders like Geert Wilders, who is impertinent, irresponsible and deranged," he said.

"We have to be strong. Humanity should win in the face of people that want to embolden terrorism," Turan added.

Along with the officials, people on social media were also quick to respond, blasting the racist politician for insulting Turkey's head of state with an underlying Islamophobic message through the use of the word "terrorist," as Wilders has associated Muslims with acts of terrorism countless times in the past.

Wilders, the leader of the Dutch anti-Islam Party for Freedom (PVV), lost four seats in the European Parliament election in May 2019 in which the Social Democrat Party was the surprise winner.

Throughout his political career, Wilders has proven himself to be racist through his numerous abhorrent anti-Islamic comments.

In 2019, Wilders canceled a Prophet Muhammad cartoon contest that sparked protests in Pakistan.

In the event, scheduled for November, Wilders planned to display caricatures of the Muslim Prophet Muhammad at the tightly guarded offices of his Party for Freedom in the Dutch parliament building. He said he received "hundreds" of entries.