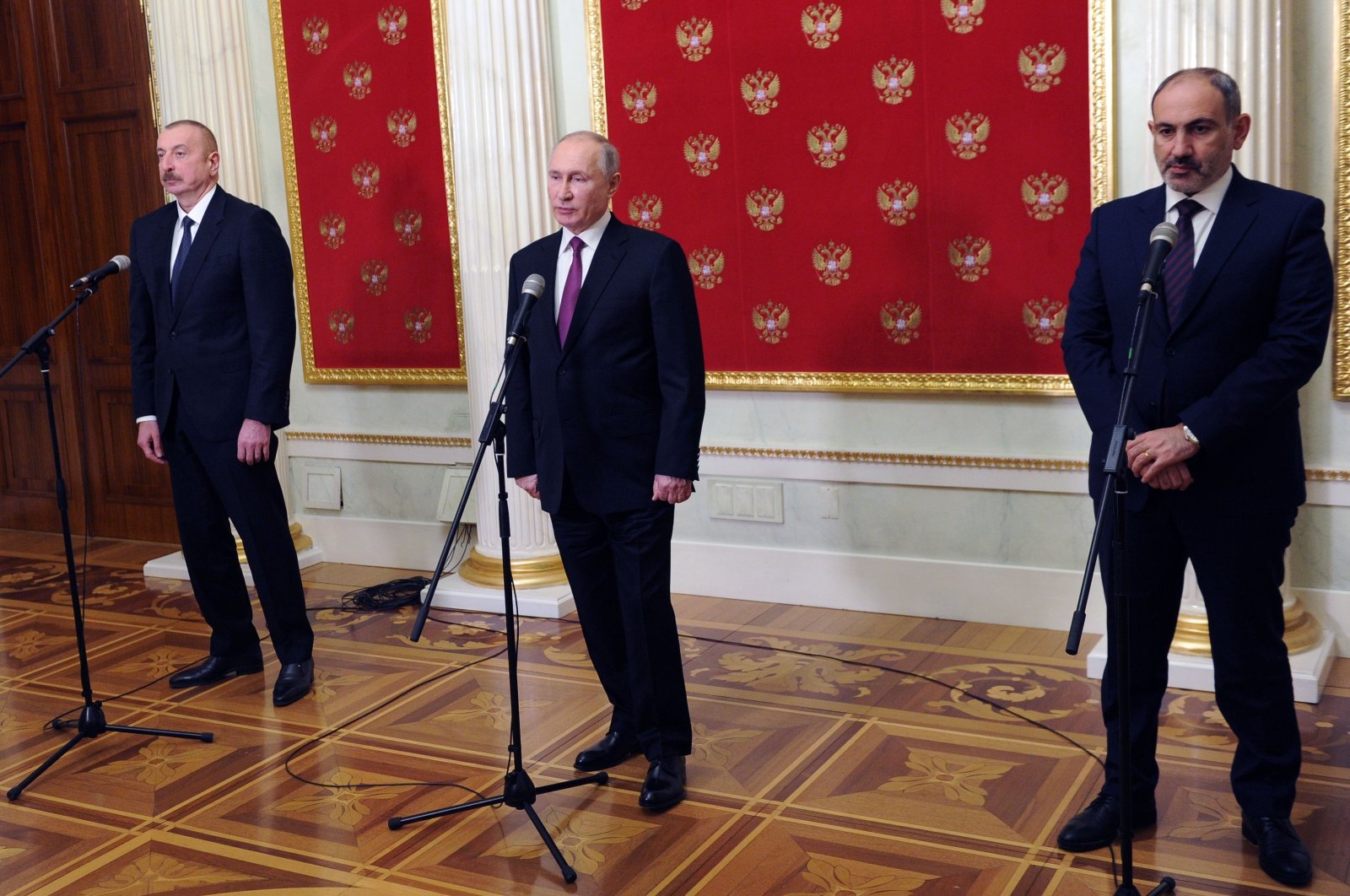 The leaders of Russia, Azerbaijan and Armenia on Monday signed a pact to develop economic ties and infrastructure to benefit the entire Caucasus region.

The trio met two months after a cease-fire deal ended a 44-day conflict over the Nagorno-Karabakh region.

"We were able to come to an agreement ... on the development of the situation in the region," Putin told reporters four hours after trilateral talks.

"I mean concrete steps to build economic ties and develop infrastructure projects. For this purpose, a working group will be created that will be headed by the vice premiers of the three governments. In the near future, they will create working expert subgroups, (and) present concrete plans for the development of transport infrastructure and the region's economy."

"I am confident that the implementation of these agreements will benefit both the Armenian and Azerbaijani people and, without any doubt, will benefit the region as a whole," he added.

The Russian leader also said the Nov. 10 agreement between the three countries, ending the 44-day Nagorno-Karabakh conflict, had generally been fulfilled. He added that Russian military units, who are temporarily in the region, are carrying out their duties.

"The meeting was very important to ensure the further sustainable and safe development of our region," Aliyev said for his part.

Recalling that two months have passed since the Moscow-brokered cease-fire deal between Baku and Yerevan, he emphasized the importance of the declaration signed between Russia, Azerbaijan and Armenia on the economic situation and infrastructure in the region.

"The declaration signed today demonstrates our belief in solving the crisis," he said, adding that one of the articles of the cease-fire agreement was aimed at removing the obstacles in transportation links.

"This (transportation) can accelerate the development of the region and strengthen its security."

Aliyev underlined that opening the transportation routes is in the interests of the people of Azerbaijan, Armenia and Russia, as well as the neighboring countries.

The Azerbaijani leader said he believes that the neighboring countries will also participate in the process of establishing transportation links.

Noting that the Nov. 10 deal was "successfully" implemented, he said: "Most of the items in the agreement have been fulfilled. Russian peacekeepers are doing their job effectively. Except for minor incidents, there was no cause for concern in two months."

He said the implementation of the cease-fire deal increases the belief that the Nagorno-Karabakh conflict is over, adding the neighboring countries have to think about the future now.

"As neighbors, we need to think about how we should live together in the neighborhood, how we can raise efforts to unblock the transport arteries and increase regional stability and security in the future," he said.

For his part, Pashinian said there are still many issues that remain unresolved, one of them the status of Nagorno-Karabakh. He added that Armenia will continue negotiations within the framework of the Minsk Group, which was set up in 1992 by the Organization for Security and Co-operation in Europe (OSCE).

Pashinian said an agreement on military prisoners could not be reached in the meeting and claimed that Article 8 of the cease-fire agreement in Nagorno-Karabakh was not fully implemented.

He said the joint declaration is very important for the development of Nagorno-Karabakh.

"Implementation of the agreements can change the economic image and appearance of our region, and economic innovations can also lead to more reliable security guarantees, and of course we are ready to work constructively in that direction. But, as I said, unfortunately, it is impossible to resolve all issues during one meeting," he added.

When new clashes erupted on Sept. 27, 2020, the Armenian Army launched attacks on civilians and Azerbaijani forces and even violated humanitarian cease-fire agreements.

During the six-week conflict, Azerbaijan liberated several cities and nearly 300 settlements and villages. There are differing claims about the number of casualties on the Armenian side, which, sources and officials say, could be up to 5,000.

The two countries signed a Russian-brokered agreement to end fighting and work toward a comprehensive resolution.

Violations, however, have been reported in the past few weeks, with some Armenian soldiers said to have been hiding in the mountainous enclave.

Most recently, Azerbaijan's Foreign Ministry said last week that the Armenian foreign minister's visit to the Nagorno-Karabakh region violated the conditions of November's trilateral agreement that put an end to the conflict between the two countries.

Aliyev also protested against the Armenian minister's visit and his meeting with Armenian separatist forces' senior figures, warning that Yerevan will regret it if it keeps taking such provocative steps.