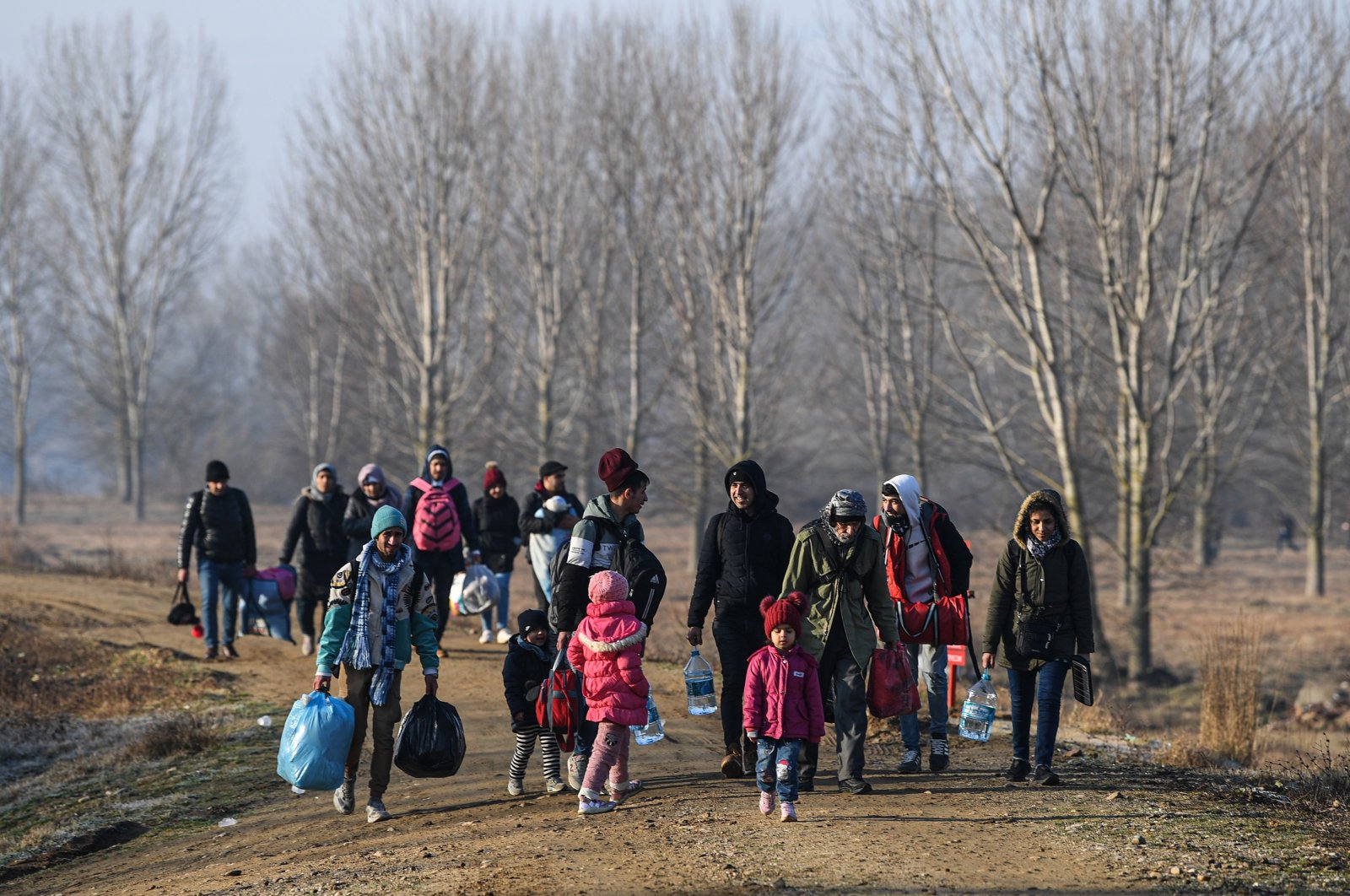 Migrants walk toward Maritsa river, near Edirne, to take a boat to attempt to enter Greece by crossing the river, northwestern Turkey, March 1, 2020. (AFP Photo)
by DAILY SABAH WITH AA Oct 06, 2020 10:30 am
RECOMMENDED

The safe and voluntary return of Syrians is among the top priorities for Turkey, which hosts more migrants than any other country, the nation's deputy foreign minister said Monday.

Joining a committee meeting of the United Nations High Commissioner for Refugees (UNHCR) refugee agency in Geneva via video link, Yavuz Selim Kıran said Turkey is extremely concerned about the living conditions of those displaced from their homeland.

It is impossible to overlook the suffering of 80 million forcibly displaced people, Kıran said, adding that the coronavirus outbreak significantly added to the hardships of people displaced around the world.

Amid the coronavirus outbreak, Turkey did not play "three monkeys" but instead rushed to help 154 countries amid the virus' spread, he said.

The closure of borders due to the virus and disruptions to the global supply system made it difficult for those seeking to extend a helping hand to the displaced, he added.

In addition to the challenges brought by the virus, some countries also push back migrants in the sea in violation of the Geneva Convention of 1951, said Kıran, who said immediate international action must be taken.

Turkey, which hosts about 4 million migrants, has accused Greece of large-scale pushbacks and summary deportations without access to asylum procedures, which is a violation of international law. It also accuses the European Union of turning a blind eye to what it says is a blatant abuse of human rights.

The Turkish coast guard says it has rescued over 300 migrants “pushed back by Greek elements to Turkish waters” last month alone. Citing what they say are credible reports, international rights groups have called repeatedly for investigations.

Greece, which lies on the EU’s southeastern border and has borne the brunt of migration flows from Turkey, denies the allegations and in turn, accuses Ankara of weaponizing migrants.

Other rights groups and refugee organizations, including the UNHCR, have repeatedly called on Greece to investigate what they say are credible reports and testimony of such expulsions occurring.

Welcoming the U.N. call to raise $745 million for refugees and countries in poor condition, Kıran said Turkey is pleased to see that some 62% of the funds were pledged already.

Kıran said he hoped countries bearing the heaviest brunt of the migrant crisis will be prioritized in this context.

He concluded by pointing out that Turkey hosts more Syrians than any country in the world – nearly 4 million – and stressed that the safe and voluntary return of Syrian migrants is among its top priorities.