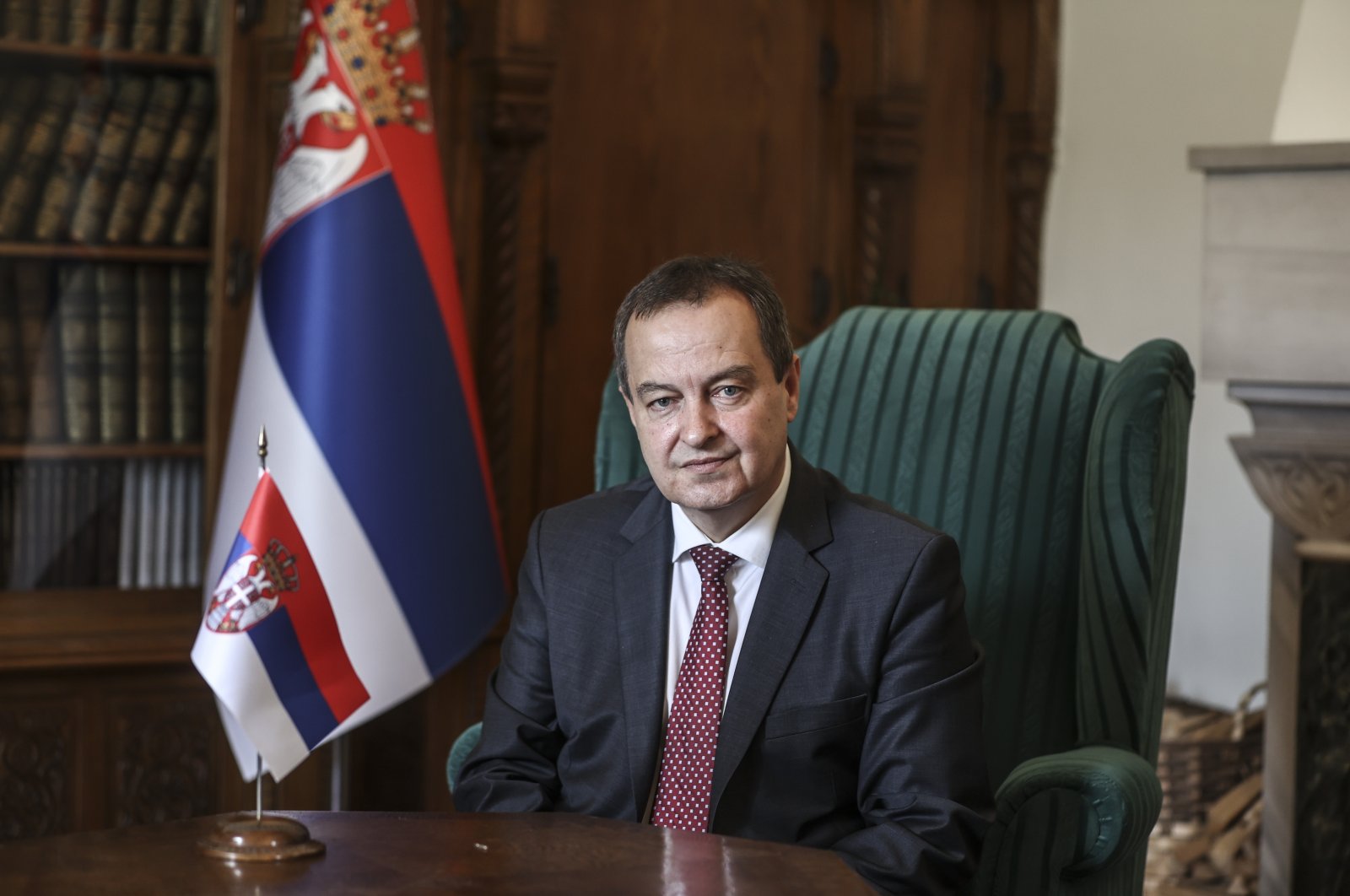 The speaker of Serbia's parliament hailed Turkey for its projects in the Balkan regions, including economic interactions and a landmark highway project that will connect the region.

“The highway project between Belgrade and Sarajevo is one of the main focuses of our cooperation, and we have great expectations from it,” Ivica Dacic told Anadolu Agency (AA) during his official visit to the Turkish capital Ankara.

Turkey’s President Recep Tayyip Erdoğan and his Serbian counterpart Aleksandar Vucic support this regional project, "which will undoubtedly raise the economic capacities of the entire Balkans and will also be a great symbol of connection in our region,” Dacic added.

“We think Turkey will be an important partner of Serbia, as it used to be before, in the economy but as well in all other areas because we still have a lot to offer to each other,” he noted.

Serbia-Turkey ties are “very close these days, our relations flourished in a couple of years,” Dacic said, adding: “We, in Belgrade, are pleased because of it, so are our friends in Ankara. I am convinced that citizens of our two countries desire constant growth of our relations because we live in the same region and share a lot from mutual culture and history.”

“Besides, our two countries recognize a good chance for economic cooperation,” he also said.

“Turkey and Serbia are constantly raising their mutual trade, it is now at the level of about 1.3 billion euros ($1.53 billion) a year, and we want to reach 2 billion (euros),” he added.

“This is very achievable, because there is still a lot of room for trade and investment on both sides, and our job as a representative of the state is to help achieve those ambitions as much as possible,” Dacic explained.

Noting that in the past, “there were only a couple of Turkish companies doing business in Serbia,” Dacic said: “A lot of caution was present toward coming of Turkish investments to Serbia and mostly it was the fault of us, in Serbia.”

“Fortunately, that has changed, because we have done a lot to attract companies from Turkey and offer them good business conditions,” he said.

“Since 2015, we have a rapid growth of Turkish investments in Serbia, but also the growth of the participation of Turkish companies in various projects, primarily in the field of infrastructure, and all that together is measured in hundreds of millions of dollars,” he explained.

Serbia is an “excellent investment destination" and all entrepreneurs from Turkey operating in Serbia can attest to that, Dacic stressed, saying: “There is a lot of possibilities for investments, primarily, in the fields of infrastructure, agriculture, energy and the field of high technologies.”

Describing these as the most dynamic sectors in Serbia, he said he hopes that Turkish companies recognize the opportunities for business development.

Dacic also said: “It is very important that the issue of raising the economic cooperation is the most important topic of the frequent meetings of our government officials, especially the ones between presidents Vucic and Erdoğan.”

“This guarantees that we will have more and more good joint projects in the future,” he added.

On the TurkStream project, Dacic said that they were “interested to be a part of it” from the very beginning.

“Not only because it is necessary for securing the supply of our growing gas needs but because it would be a good chance for a good profit for our country being a transit point.

“Unfortunately, in the past, there were political obstacles for these kinds of projects, primarily the limitations imposed by the EU. However, the Turkish Stream showed that bureaucratic obstacles should not stand in the way of the economic interests,” he explained.

Noting that Serbia is a “European transportation and energy hub, especially when we have in mind connecting Turkey with Western Europe as the biggest economic entities in our surroundings,” Dacic said: “We must use this position as a chance to multiply our capacities as well.”

The TurkStream project comprises two lines with a total capacity of 31.5 billion cubic meters (bcm) per year. The first line will carry 15.75 bcm of Russian gas to Turkish consumers every year, and the second will carry another 15.75 bcm from Russia to Europe via Turkey.

Kosovo-Serbia talks: ‘No one can get everything’

On the negotiations between Kosovo and Serbia, Dacic said his country is “very interested for this process to succeed and has been working patiently and responsibly on it for years.”

“Unfortunately, the other side, the authorities in Pristina, does not relate in this way and thanks to their obstructions, this process often comes to a standstill. That is still the case now,” he added.

“We want the dialogue to result in a comprehensive compromise and decisions that will not fully satisfy us or Pristina,” he explained. “We are very well aware that no one can get everything and that concessions are inevitable.”

“If we were not aware of this, there would be no reason to talk. Only a compromise will resolve this issue in the long run and will enable both Serbs and Albanians in Kosovo to turn to the future and live in peace,” he said.

“I have been involved in these talks from the beginning and as prime minister, I signed the Brussels Agreement eight years ago, but unfortunately some of its articles have not been applied to this day, primarily the agreement on the establishment of the Union of Serbian Municipalities in Kosovo and Metohija.

“We are fulfilling everything we agreed on, but you can see that the Pristina is not doing the same,” Dacic noted.

Dacic also called on Western mediators, primarily the EU and the U.S., to push Pristina's authorities to continue with the process and to not only work toward finding a constructive solution but also fulfill what had been agreed.

Serbia’s parliament speaker also mentioned the “unsolved border issues with our neighbors, primarily with Croatia and Bosnia and Herzegovina.”

Describing it as a “technical” issue rather than a political one, Dacic said: “I am sure that these issues will be solved through bilateral negotiations.”

“As far as Serbia is concerned and I think our neighbors think the same, these issues do not burden our relations and we are ready to solve them with our best intentions,” he explained.

Stressing that crossing the border in the region is becoming simpler, he said: “Our citizens are crossing to other countries easier than before and we will keep on working on this.”

“The removal of border barriers, mostly for goods and services, is the essence of the initiative 'Open Balkans' which was launched on Serbia`s initiative with Albania and North Macedonia.

“We desire our region to be a place without any economic impediments because this is the only way we can encourage our trade exchange and economic growth,” he added.

Touching on the Montenegro-Serbia tension regarding the enthronement ceremony of the new metropolitan of the Serbian Orthodox Church in Montenegro, Dacic said: “Montenegro is undergoing an internal crisis and the turbulences that are present there have nothing to do with Serbia, nor do we influence them.”

“This is exclusively an internal matter of Montenegro and they must solve them on their own, not by violence, which was the case recently, but only through dialogue and the political process,” he added.

Serbia wants Serbs in Montenegro to “enjoy equality and completely the same rights as all other nations, but unfortunately, that has not been the case for a long time,” the Serbian politician added. “Serbs have been discriminated in various areas and this is inadmissible in a country that wants to be democratic.”

“This includes the right to religion, which is entirely endangered by great pressure on the Serbian Orthodox Church,” he said.

On Serbia’s relations with the EU, Dacic said his country “progressed on its way to EU membership, even more so in its internal reforms than the official result shows through the number of open negotiation chapters.”

“So, we can do it much faster, but the problem is the EU, which resists the new enlargements for its own reasons,” he added.

“We cannot have much influence on that, but EU membership remains our priority and we continue to meet the criteria for membership.

“But this does not mean that we will sit and wait for the EU to change its mind regarding the enlargement to the Balkans,” he stressed.

Serbia continues to strengthen its economy “to remove barriers” with its neighbors, Dacic said.

“As far as NATO is concerned, there is no public interest in Serbia to join this alliance, nor is it one of our priorities,” he noted. “We pursue a policy of military neutrality, towards all military alliances, including NATO, so that we are open to cooperation with everyone, to the extent that it suits our defense interests.”