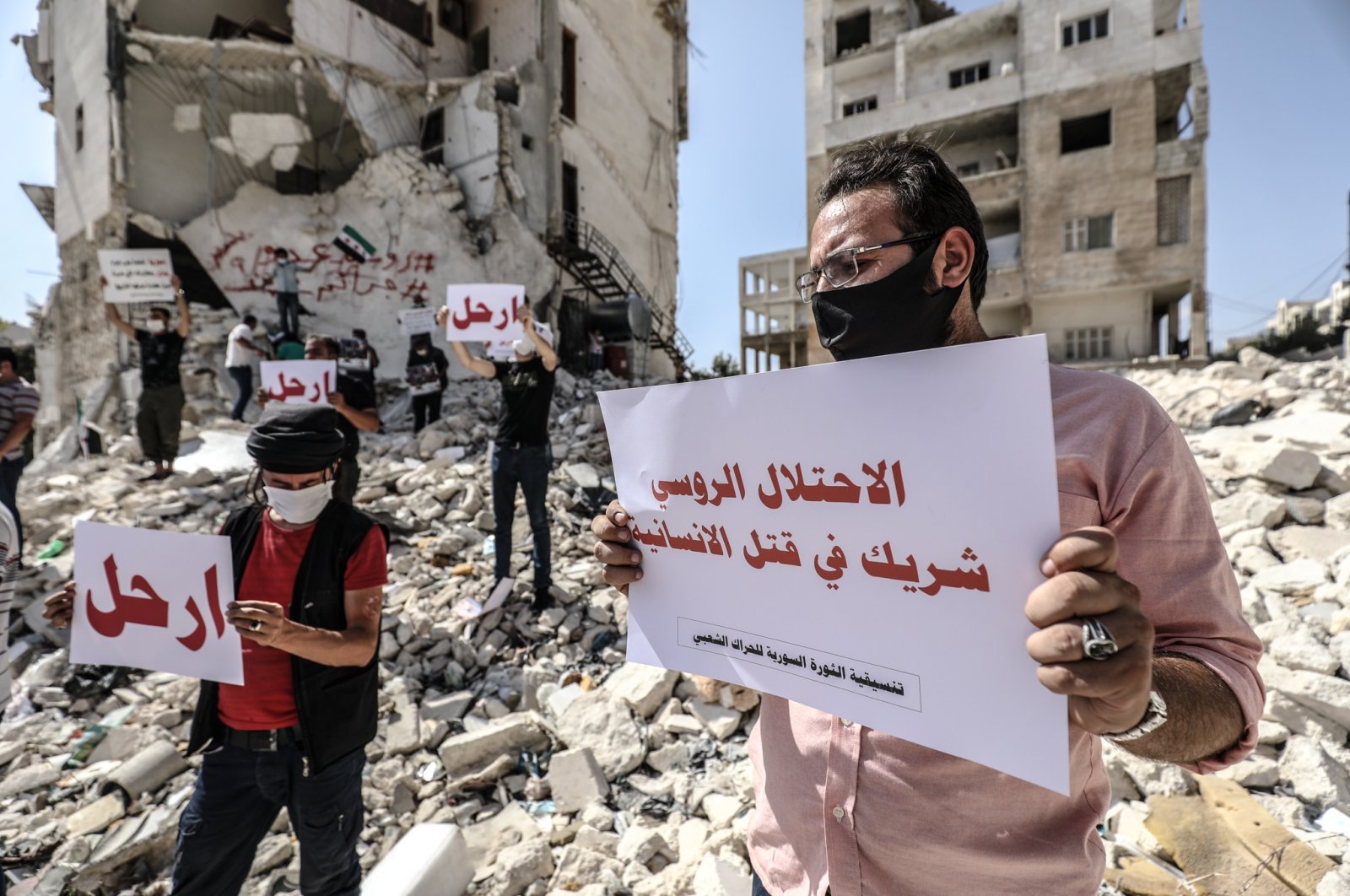 Dozens of Syrians demonstrated in northwestern Syria’s Idlib to mark five years of Russian intervention in support of Bashar Assad's regime in the civil war.

The protesters stood amid the rubble of houses destroyed by Russian bombings and employed slogans like "the Russian occupiers must leave" and "Putin and his warplanes destroyed the most ancient civilization in history."

One of the protesters, Mustafa Manna, told Anadolu Agency (AA) that Russia backed the regime in killing and displacing civilians.

"It (Russia) has brought to the country nothing but devastation and destruction," he said, adding that even schools, hospitals and residential neighborhoods have not been spared.

Russia intervened directly in Syria in late 2015 allegedly at an official request of the Syrian regime. Moscow has established a major presence in Syria, where its air force and military bases across the country have allowed Assad in recent years to defeat opposition who rose up against his authoritarian rule.

Most recently, the United States imposed new sanctions Wednesday on entities and individuals in Syria as part of Washington’s pressure campaign against the Assad regime and his inner circle.

The U.S. Treasury Department and State Department sanctions are the result of legislation known as the Caesar Syria Civilian Protection Act, named after the pseudonym of a Syrian policeman who turned over photographs of thousands of victims of torture committed by the Assad regime.

Among those sanctioned Wednesday was the Syrian regime army’s Russian-backed 5th Corps that was established during the country’s conflict that started in March 2011. The 5th Corps includes rebels who later paid allegiance to Assad’s regime.

The U.S. State Department said it is sanctioning 5th Corps commander Maj. Gen. Milad Jedid “for his involvement in the obstruction, disruption, or prevention of a ceasefire in Syria.”

The sanctions also included two sisters of Yasser Ibrahim, who is suspected of obstructing a political solution to the Syrian conflict and using his networks across the Middle East and beyond to cut deals to enrich Assad.

"The United States will continue to employ all of its tools and authorities to target the finances of anyone who profits from or facilitates the Assad regime's abuse of the Syrian people," U.S. Treasury Secretary Steven Mnuchin said in a statement.

U.S. Secretary of State Mike Pompeo separately warned that the targeting of officials, commanders and "corrupt business leaders will not cease until the Assad regime and its enablers take irreversible steps to end their campaign of violence against the Syrian people and genuinely implement United Nations Security Council Resolution 2254."

Sanctions imposed earlier this year included those on Assad, his wife and their eldest son, Hafez Assad, as well as members of the extended Assad family, senior military leaders and business executives. Many of those on the list were already subject to U.S. sanctions, but the penalties also target non-Syrians who do business with them.

The new wave of sanctions came as opposition activists reported clashes in southern Syria between the 5th Corps and local fighters who belong to the minority Druze sect.

The Britain-based Syrian Observatory for Human Rights, an opposition war monitor, said the fighting that broke out Tuesday in Sweida province left 16 Druze fighters and 12 members of the 5th Corps dead. It also said that dozens were wounded on both sides.