Those who want cease-fire are sending weapons to Armenia, Aliyev says 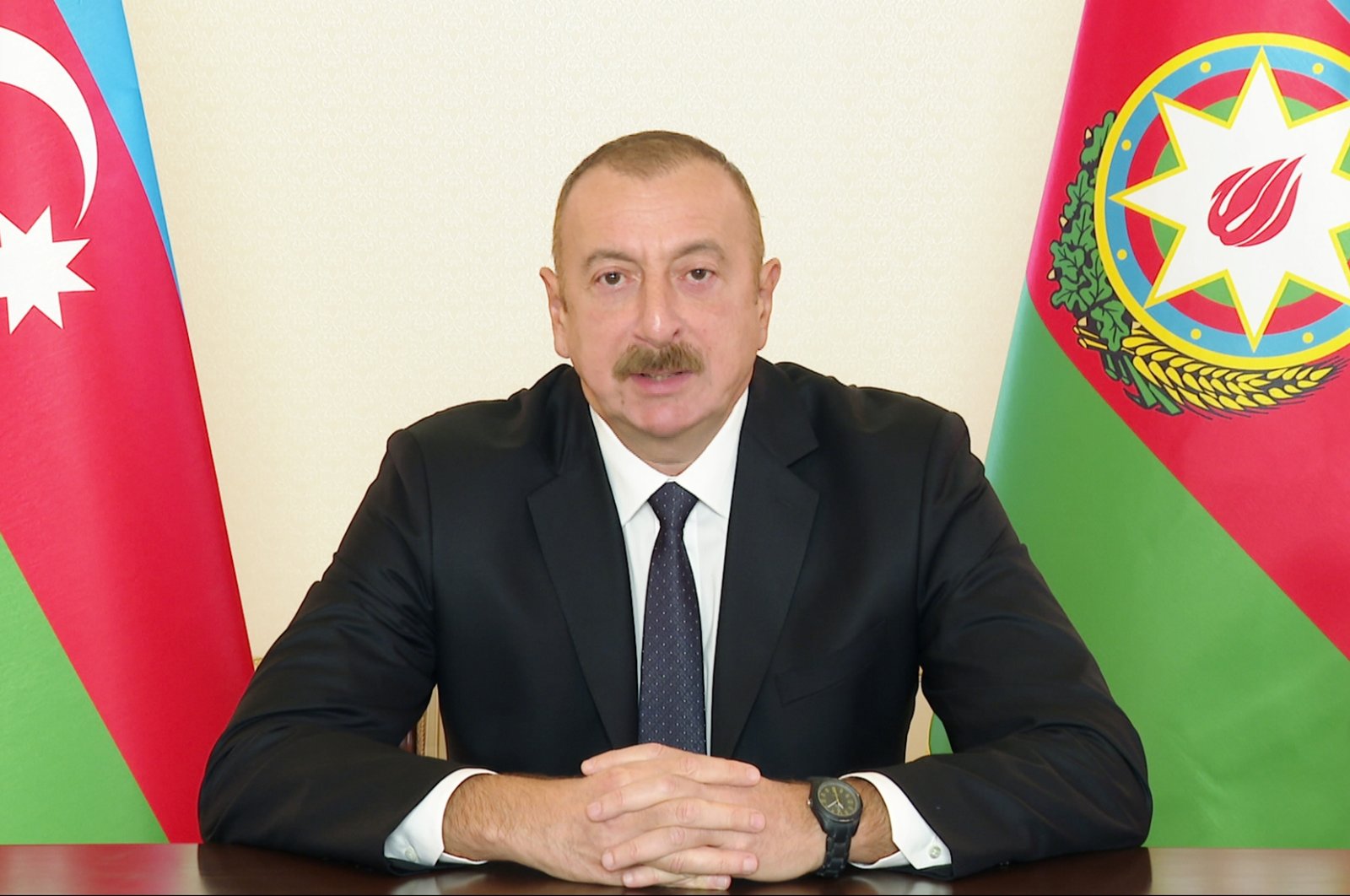 Those who want a cease-fire are sending weapons to Armenia, Azerbaijani President Ilham Aliyev said Monday.

In his speech to the nation, Aliyev noted that Azerbaijan agreed on a cease-fire to exchange prisoners and bodies, but Armenia broke the truce in a few minutes.

He also called on Armenia’s backers to make Armenia leave the territories it occupied for the conflict to stop.

"If you want to save the Armenian state, tell them to leave our lands," Aliyev said referring to Nagorno-Karabakh, occupied by Armenia for nearly 30 years. "They will go out with a word of yours," he added.

He also underlined that since the current hostilities started on Sept. 27, the Azerbaijani Armed Forces have destroyed 252 Armenian tanks and seized another 53, as well as destroyed six S-300 anti-aircraft missile systems.

"Where do such expensive weapons come from in a country with such a bad economy? I'm asking, where's the money coming from for this?" he asked.

Aliyev also announced the names of 17 villages liberated from Armenia's occupation a day earlier, along with the city of Gubadli.

Armenia and Azerbaijan on Monday accused each other of violating the new cease-fire announced the day before in a bid to halt the fighting over the occupied region of Nagorno-Karabakh that has killed hundreds and possibly thousands, in just four weeks.

The truce that took effect Monday morning was agreed upon on Sunday after talks facilitated by the United States. It was a third attempt to establish a lasting cease-fire in the flare-up of a decades-old conflict. Two previous Russia-brokered cease-fires, including one last weekend, frayed immediately after taking force.

The first cease-fire reached on Oct. 10 was violated by the Armenian army within 24 hours as it claimed several civilian lives when it carried out missile attacks on Azerbaijan's second-largest city Ganja. The second one on Oct. 17 was again violated by Armenia.

Azerbaijani Defense Ministry said on Monday that Armenian forces fired at Azerbaijani settlements and the positions of the Azerbaijani army “along the entire front, as well as on the Armenia-Azerbaijan state border" using various small arms, mortars and howitzers.

The villages of the Aghdam region, as well as the city of Tartar and its surrounding villages, are being subjected to heavy shelling, the ministry said in a statement.

The ministry added that Armenian forces also opened fire on Tovuz, Gadabay and Dashkesan regions of Azerbaijan from the Berd, Chambarak and Vardenis regions of Armenia.

The positions of Azerbaijani units in Tartar, Aghdam, Fuzuli, Lachin and Gubadli also came under attack, it said.

The ministry, meanwhile, claimed that Azerbaijani army units are fully complying with the armistice.

Nagorno-Karabakh lies within the territory of Azerbaijan but has been under the occupation of Armenian forces since a war there ended in 1994.

Multiple U.N. resolutions and many international organizations demand the withdrawal of the occupying forces. In total, about 20% of Azerbaijan's territory has been under illegal Armenian occupation for nearly three decades.

The latest fighting that began Sept. 27 has involved heavy artillery, rockets and drones, killing hundreds in the largest escalation of hostilities over the occupied region in more than a quarter-century.

According to Armenian officials, 974 of their troops and 37 civilians have been killed in the clashes so far. Azerbaijani authorities haven’t disclosed their military losses but say the fighting has killed 65 civilians and wounded 300.

While 2,243 houses and 90 multi-apartment residential buildings were destroyed, and 402 civil facilities were damaged in Armenian attacks, according to Azerbaijani officials.

Russian President Vladimir Putin said last week that according to Moscow’s information, the death toll from the fighting was nearing 5,000, significantly higher than the number reported by both sides.