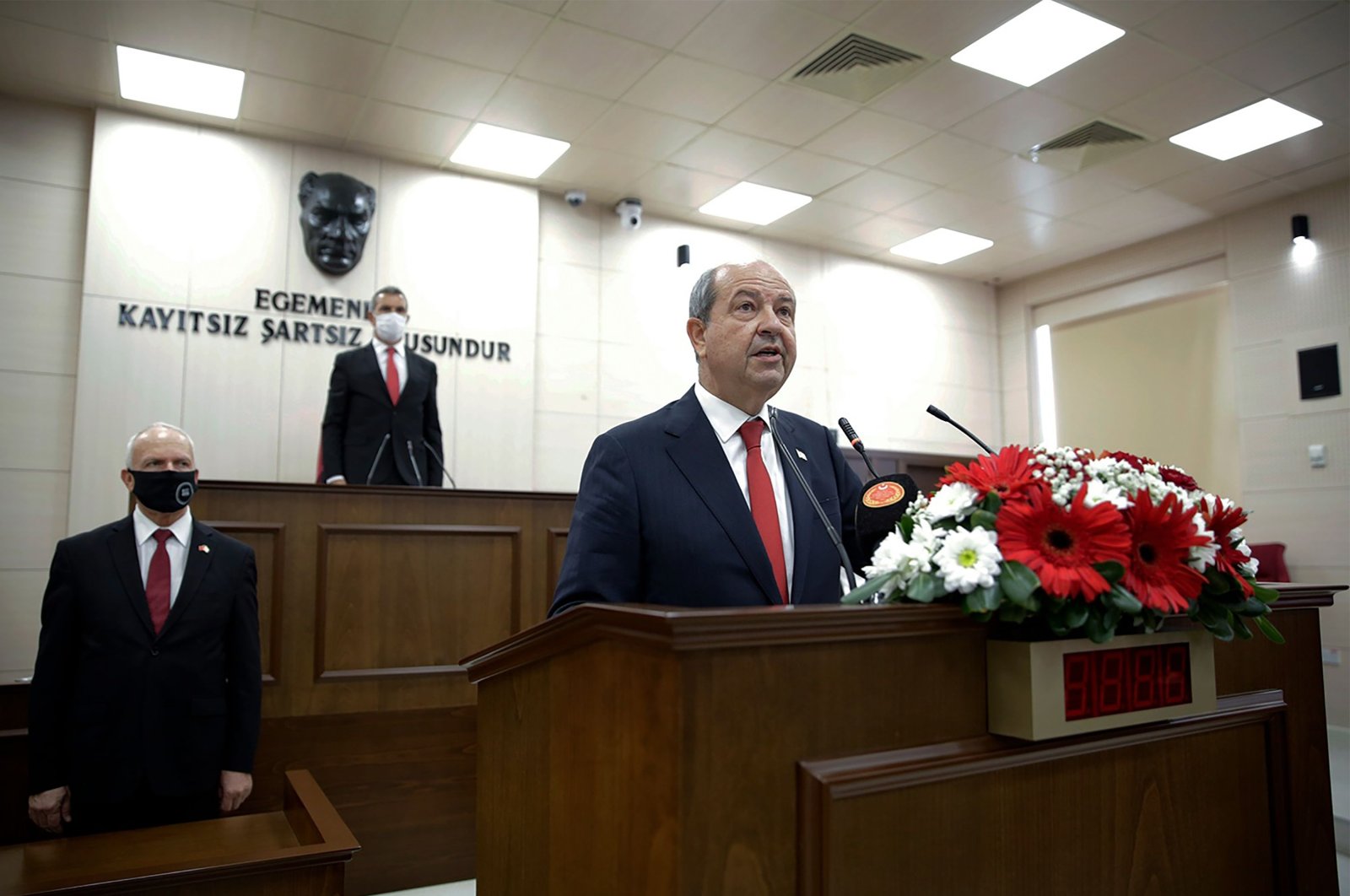 Ersin Tatar, the newly-elected Turkish Cypriot President, speaks during the oath-taking ceremony at the parliament headquarters in Lefkoşa (Nicosia), Oct. 23, 2020. (AFP Photo)
by Daily Sabah with Agencies Oct 28, 2020 11:29 am
RECOMMENDED

The leaders of the Turkish and Greek sides of Cyprus will hold a rare meeting next week in the wake of Ersin Tatar's election as president of the Turkish Republic of Northern Cyprus (TRNC), the United Nations said Tuesday.

It will be the first meeting between Nicos Anastasiades, president of the Greek Cypriot administration, and Tatar, but no major decisions are expected to come out of their get-together.

The pair will meet on Nov. 3 in the U.N.-controlled buffer zone at the residence of the U.N.'s head of mission, Elizabeth Spehar, a statement read.

"Ms. Spehar looks forward to hosting Mr. Anastasiades and Mr. Tatar for their first informal meeting together as the leaders of the Greek Cypriot and the Turkish Cypriot communities," the U.N. said.

Voters in the TRNC on Oct. 18 narrowly elected Tatar as their president at a time of heightened tensions in the Eastern Mediterranean.

Tatar, an advocate of a two-state solution on the island and backed by Ankara, edged out previous Turkish Cypriot leader Mustafa Akıncı, a supporter of reunification with the Greek Cypriot south.

U.N. Secretary-General Antonio Guterres has said he wants to rekindle talks between the two sides.

Over the decades, there have been several attempts to resolve the Cyprus dispute, all amounting to nothing. The latest attempt held in Switzerland in 2017 with the participation of each of the island's guarantor countries ended with no signs of progress.

Tatar was also behind the reopening of the resort of Varosha, a ghost town sealed off since 1974. Anastasiades has said the move goes against international law and is an obstacle to resuming stalled peace talks.

Amid the ongoing disputes over the Eastern Mediterranean, Britain flexed its naval muscles in its largest deployment off the island of Cyprus in decades to make its presence felt in the volatile region and underscore what officials said was the country’s post-Brexit commitment to buttressing Europe’s security.

A three-ship strike force centered around the Royal Navy’s flagship HMS Albion on Tuesday conducted joint maneuvers with a Greek Cypriot patrol vessel and helicopters and the French frigate Jean Bart off the coastal town of Limassol.

The main part of the exercise involved Greek Cypriot special forces and British Royal Marines boarding a supposedly hijacked ship by fast-roping down from hovering helicopters while small, highly maneuverable speed boats came alongside the vessel.

“This is the U.K. doing its part to prove our commitment to European safety and security whilst working with our NATO allies and partners,” said Deputy Strike Force Commander Capt. Phil Dennis.

“Cyprus is a very important partner for the U.K. in the Eastern Mediterranean and the Mediterranean region in general,” Dennis said, adding that the exercise offered “a great chance for us to see and experience the understanding and knowledge of each other.”

The U.K. retained two military bases on Cyprus after the Eastern Mediterranean island gained independence from British colonial rule in 1960.