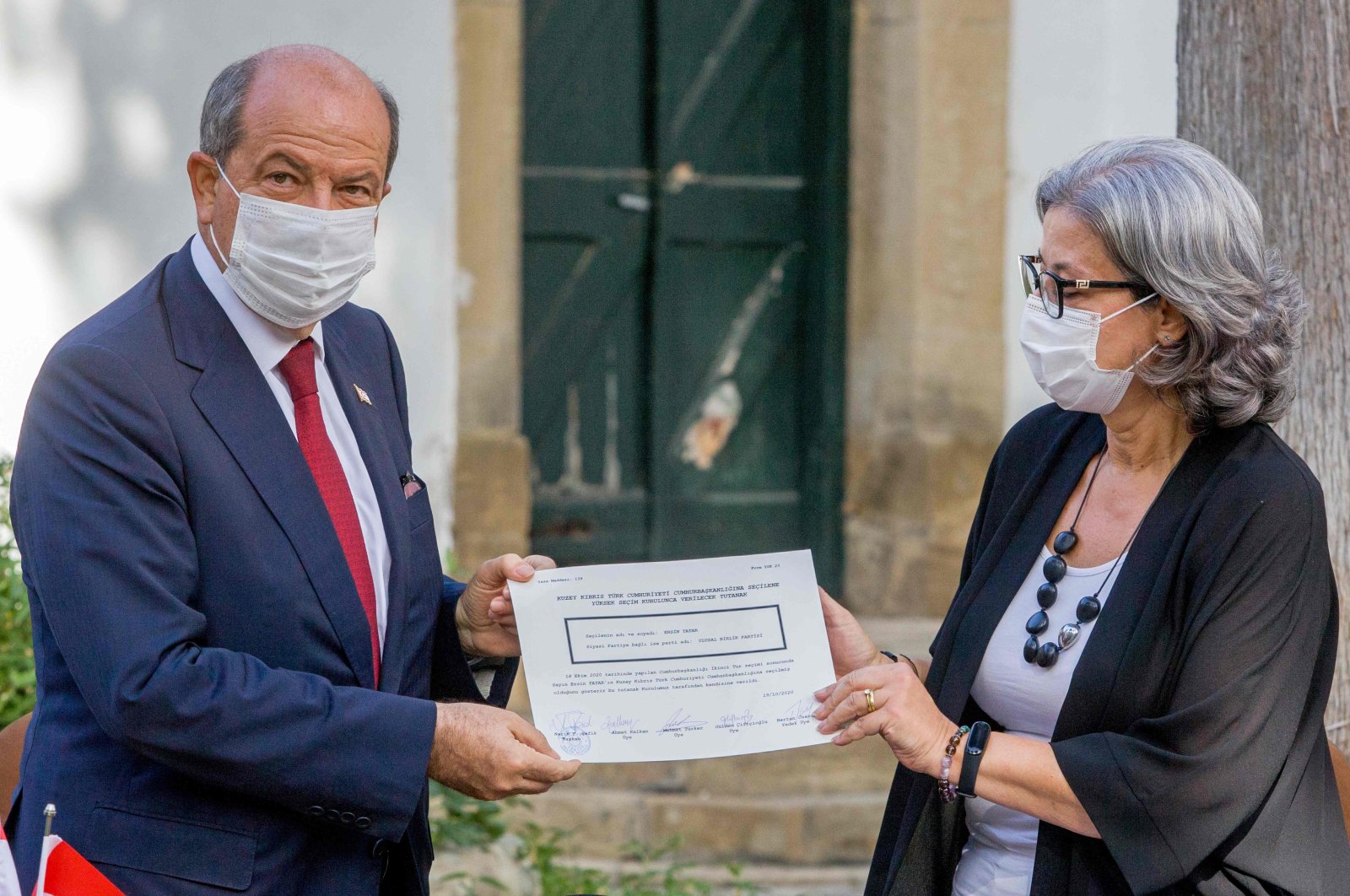 Newly elected Turkish Cypriot President Ersin Tatar (L) receives the certificate that accredits him as the winner of the presidential elections in the northern part of Nicosia (Lefkoşa), Turkish Republic of Northern Cyprus, Oct. 19, 2020. (AFP Photo)
by Daily Sabah with AFP Oct 20, 2020 10:41 am
RECOMMENDED

Voters in the north on Sunday narrowly elected Tatar, who was backed by Ankara, at a time of heightened tensions in the Eastern Mediterranean. Tatar is an advocate of a two-state solution and held the post of premier in the country having edged out previous Turkish Cypriot leader Mustafa Akıncı, a supporter of a federalist solution on the island.

"The verdict of our compatriots to elect Mr. Ersin Tatar as the new leader of the Turkish Cypriot community is fully respected," said Anastasiades, urging him to back a new United Nations-led peace initiative.

"I congratulate Mr. Tatar and look forward to a familiarity meeting as soon as possible," he added in a statement.

Kyriacos Koushos, a spokesman for Anastasiades' government later, said that the Greek Cypriot leader and Tatar had agreed to meet in the U.N.-patrolled buffer zone, which has for decades separated the north and south.

"The president of the republic proposed to Mr. Tatar to meet as soon as possible for a first acquaintance and contact, something that Mr. Tatar accepted," said Koushos in a statement, giving no time frame for the planned meeting.

Tatar, who ran as the candidate of the National Unity Party (UBP) and was the former prime minister, became president after winning the second round of presidential elections with 51.74% of the votes against rival Akıncı, who obtained 48.26%, according to the unofficial count.

In his first statement issued after the elections, Tatar said he extends a hand of peace and friendship to the Greek Cypriot people, as he thanked Turkish Cypriots for their support.

"I will keep all my promises and will be the president of everyone and act with a unifying, conciliatory approach and stand with our people," Tatar said, as he pledged to work hand-in-hand with all institutions to enhance living standards on the island.

Meanwhile, Tatar received his certificate of the election on Monday. "The important thing is to work for the betterment of the TRNC and Turkish Cypriots," Tatar stated during the ceremony in the capital Lefkoşa (Nicosia) after receiving the certificate from Narin Ferdi Şefik, the nation's top election official.

The president-elect will be sworn in as the country's fifth president after the results are published in the Official Gazette.

Anastasiades also said he was "ready and determined" to respond to U.N. Secretary-General Antonio Guterres' calls for a re-engagement in the peace process to ensure the talks resume after a three-year hiatus.

"I want to hope that Mr. Tatar shows the same willingness," he said, ahead of his government spokesman disclosing that Anastasiades had contacted the U.N. chief of the mission in Cyprus who agreed to make the arrangements for their meeting.

Guterres had said he would rekindle the peace process after elections in the TRNC. The U.N. is expected to convene a meeting between the two sides, Turkey, Greece – the key ally of Greek Cypriots – as well as former colonial ruler Britain.