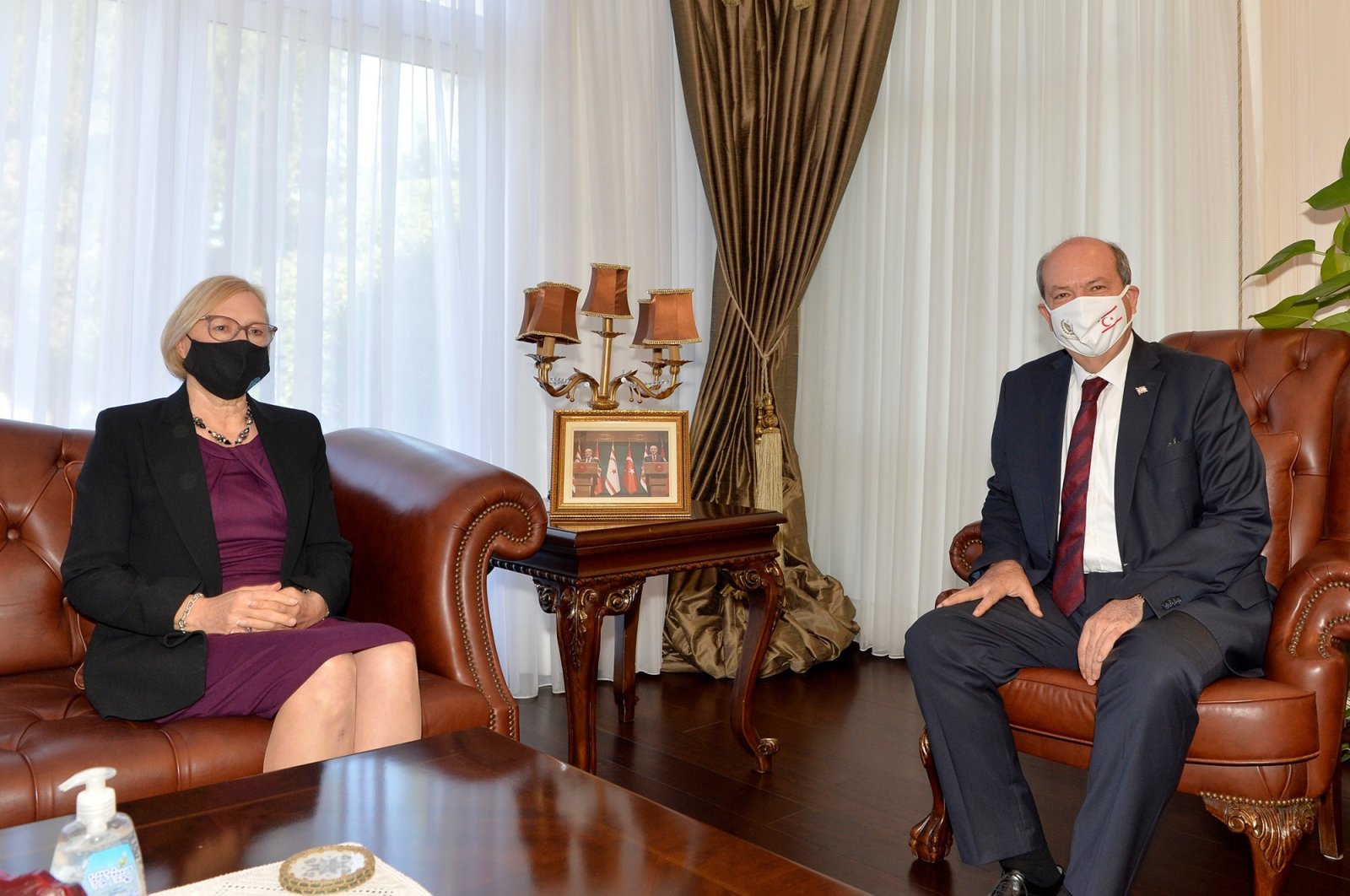 The President of the Turkish Republic of Northern Cyprus (TRNC) Ersin Tatar (R) receives the head of the United Nations Peacekeeping Force in Cyprus, Elizabeth Spehar, in the capital Lefkoşa (Nicosia), Nov. 12, 2020. (AA Photo)
by DAILY SABAH WITH AA
Nov 13, 2020 10:25 am

The President of the Turkish Republic of Northern Cyprus (TRNC) Ersin Tatar on Thursday met with the head of the United Nations Peacekeeping Force in Cyprus, Elizabeth Spehar.

In the meeting held in the capital Lefkoşa (Nicosia), Tatar briefed Spehar and her delegation on their new approach and policy to achieve reconciliation on the island.

Noting that failed talks are now a thing of the past, he said a possible compromise should be sought on the grounds of sovereign equality and co-existence.

Tatar said Turkish Cypriots were sidelined by the international community for years and they only had Turkey backing them.

He also called the reopening of the ghost town of Varosha after 46 years a game-changer.

Tatar said the properties of the region will be returned to their real owners through the Immovable Property Commission in the TRNC, which is also recognized by the European Court of Human Rights.

For her part, Spehar said there is a serious lack of trust between both parties on the island and it is necessary to initiate confidence-building measures.

The two sides also exchanged views on the upcoming visit of Jane Holl Lute, a temporary special advisor to the U.N. chief, as well as the 5+U.N. format meeting where all stakeholders will come together.

On Friday, Tatar also held a phone call with British Foreign Minister Dominic Raab. While Raab congratulated Tatar for his election victory, Tatar stated that talks for a federal solution on the island have ended following long years of failed attempts and underlined that a new page should be turned for the solution.

Underlining that the Turkish Cypriot people authorized him to reconcile with the Greek side based on the presence of two sovereign states on the island, Tatar said that he will act accordingly.

Tatar also stated that the "outdated" and "unfair" practices of isolation against the Turkish Cypriots should be lifted and added that restrictions on direct flights and sports violate basic human rights and liberties.

Regarding the reopening of Varosha, Tatar said that the move is in line with U.N. decisions and international law and confirmed that the properties of the region will be returned to their real owners.

Raab, for his own part, said the U.K. is ready to support the U.N. process for a solution on the island of Cyprus.

Tatar was elected TRNC's fifth president after winning nearly 51.69% of the votes in the second round of elections on Oct. 18. He assumed office on Oct. 23. Last week, Tatar held his first informal meeting with the Greek Cypriot leader Nicos Anastasiades. The face-to-face meeting took place at the residence of Spehar in the buffer zone in Nicosia and lasted about two hours.

The U.N. spokesperson in Cyprus said in a statement that Tatar and Anastasiades had the opportunity to get to know each other and exchange views for the first time informally at the meeting hosted by Spehar in a sincere atmosphere.

The two emphasized their determination to respond positively to the commitment of U.N. Secretary-General Antonio Guterres to hold a five-party unofficial U.N. meeting, which would include the three guarantor countries plus the two sides in the island of Cyprus, in an appropriate environment.

Turkey, as a guarantor nation of the TRNC, is currently carrying out hydrocarbon exploration activities in the region. Ankara has consistently contested the Greek Cypriot administration's unilateral drilling activities in the Eastern Mediterranean, asserting that the TRNC also has rights to the region's resources.