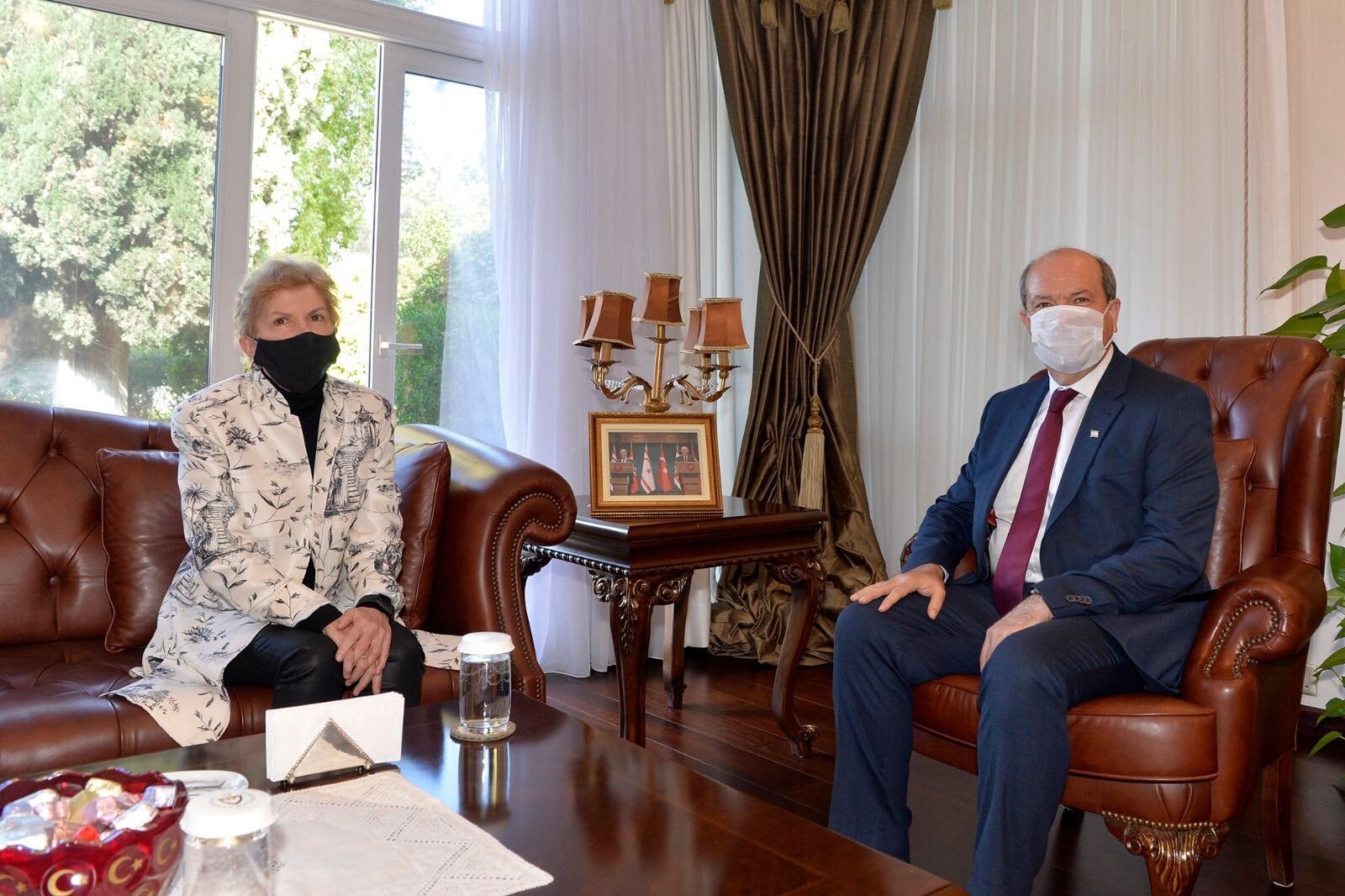 Turkish Republic of Northern Cyprus (TRNC) President Ersin Tatar said he is not leaning toward picking up Cyprus negotiations from where they left off at the 2015-2017 negotiations in Switzerland, saying that the TRNC has changed since then.

Tatar’s statement came after a three-hour meeting Tuesday with the United Nations special envoy to Cyprus, Jane Holl Lute, at the presidential office in Lefkoşa (Nicosia).

Noting that a new era has begun in Cyprus, Tatar said talks based on a federal system have not produced any results for the past five decades and that the upcoming talks should be based on mutual sovereignty and a cooperation-based two-state approach.

Tatar said an unofficial 5+1 meeting led by the U.N. should be held with the participation of guarantor states.

Tatar also told Lute that the Annan Plan and Crans-Montana negotiations did not produce any results despite the goodwill of the Turkish Cypriots.

Touching on the difficulties faced by Turkish Cypriots, Tatar also told Lute that his people have been blocked from attending international sports competitions, and the economic, political and cultural sanctions have obstructed the development of the TRNC.

“The Turkish Cypriots are the real victims,” he said.

On the ongoing gas exploration initiatives in the Eastern Mediterranean, Tatar said he told Lute that the island has more strategic importance than ever, and a permanent, fair deal would only be possible by taking into account the ongoing developments.

Turkey wants to see energy as an incentive for a political resolution on the island and peace in the wider Mediterranean basin rather than a catalyst for further tensions. However, the country vehemently objects to the unilateral agreements the Greek Cypriot administration has struck with other states and the concession licenses provided for global energy companies without any regard for the rights of the Turkish Cypriots.

U.N. Secretary-General Antonio Guterres has instructed Lute to begin consultations with all involved parties to determine whether preconditions exist to convene an informal 5+1 summit to end the island's division, which spans decades.

Lute is also in consultation with the three guarantor powers, Britain, Greece and Turkey, on convening a five-way meeting on finding a way for formal talks to resume.

Guterres is hoping to get the three governments more involved to build momentum that is currently lacking.

Last month, the rival Cypriot leaders held a "break-the-ice" meeting where they promised to back a U.N.-led Cyprus peace push involving the outside powers.

It was their first meeting since Ankara-backed Tatar was elected president of the TRNC. Tatar was elected in October on a platform of seeking a two-state solution for the island of Cyprus, rather than a bicommunal federation.

The two men both acknowledged that their positions on the way forward were "far apart."

The island of Cyprus has been divided into a Turkish Cypriot government in the north and a Greek Cypriot administration in the south since a 1974 military coup aimed at Cyprus' annexation by Greece. Turkey's military intervention stopped the yearslong persecution and violence against Turkish Cypriots by ultra-nationalist Greek Cypriots. The TRNC was established in 1983 on the northern tier of the island and is only recognized by Turkey. The country has faced an ongoing embargo on commerce, transportation and culture ever since.