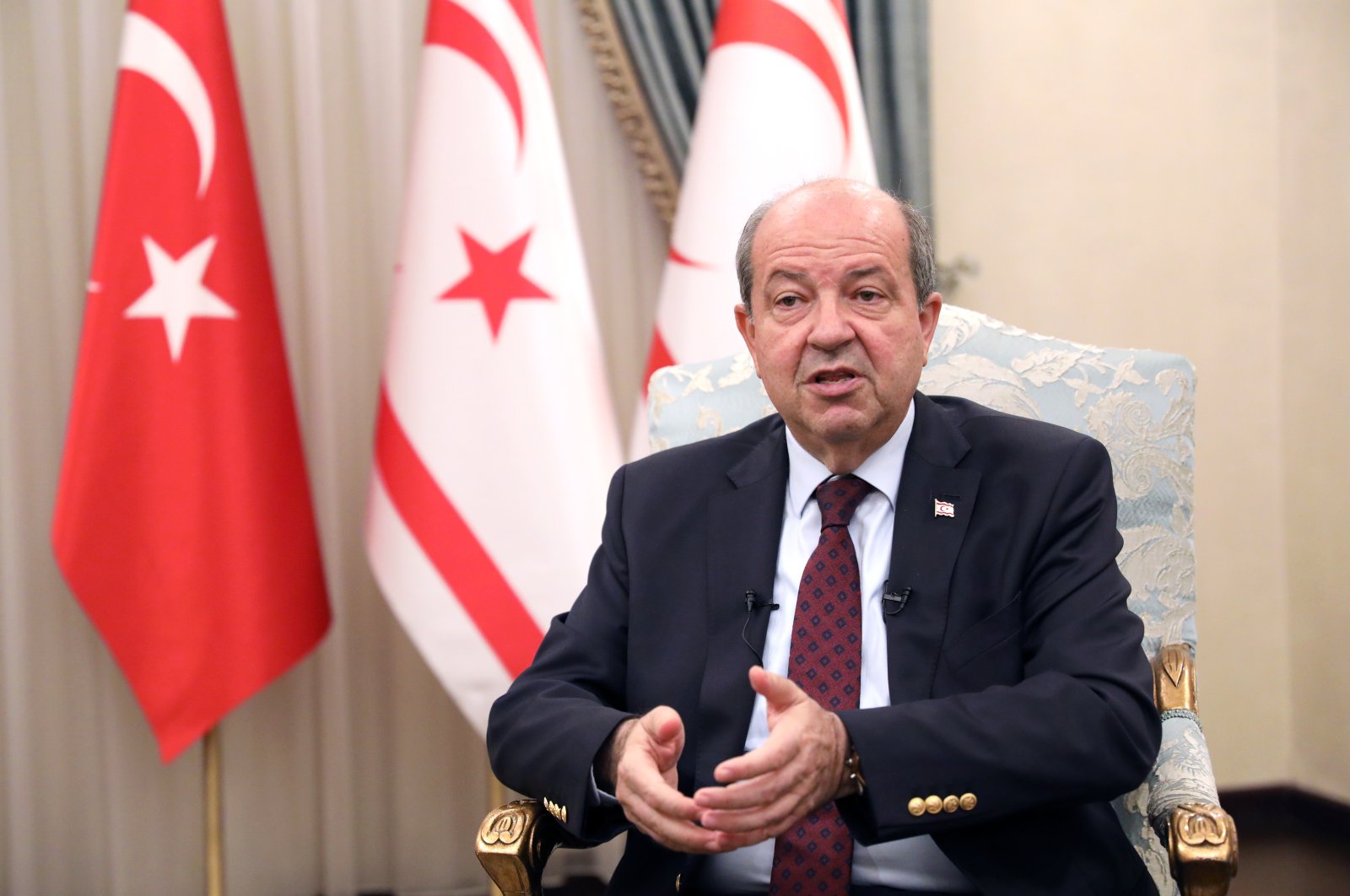 TRNC's new President, in his first-ever interview to the press after being elected, has underlined the importance of working in harmony with Turkey, his commitment to dialogue on the divided island and will strive to remain neutral to better serve every Turkish Cypriot.

Ersin Tatar, the newly elected president of the Turkish Republic of Northern Cyprus (TRNC), has vowed to work towards bringing the two sides of the island to the negotiating table, based on sovereign equity.

After being sworn in on Friday, Tatar gave his first interview to Turkey's Anadolu Agency (AA) at the TRNC Presidency.

Tatar said rather than just focusing on negotiations like his predecessors, he would pay special attention to the economy, as well as social and sports issues in order for Turkish Cypriots to be better recognized internationally as a separate nation.

We want to strengthen the relations with TRNC citizens living in Turkey and the U.K., he added.

‘We need to work in harmony with Turkey'

Tatar underlined that he would pay his first official visit to Turkey upon the invitation of Turkish President Recep Tayyip Erdogan. He thanked him for the invitation.

"I attach great importance to it. I believe this meeting will give the world the message, 'We know and give importance to the TRNC and its newly-elected president,'" Tatar said.

Highlighting the importance he gives to his relations with Turkey, Tatar said he would work to further strengthen ties between both governments and the people of the two countries.

"When Turkish Cypriots were alone, the Republic of Turkey was with them."

He said working in harmony with Turkey strengthens the TRNC and the two countries would determine a mutual policy in the negotiation process.

He said despite the goodwill of the Turkish side, the attitude of the Greek side on the Eastern Mediterranean issue was clear during the negotiation processes. "Now, alternative solutions should be laid on the table. On the basis of sovereign equality, I'll work to bring the two states living side by side and those states' cooperation on the negotiation table more."

He said the two-state solution could not be denied and no one would allow this structure to be changed.

"The Republic of Turkey is our homeland. We were able to see these days under its guarantorship."

Tatar said after the hydrocarbon discovery, international players sought to position themselves in the region despite having no ties to it.

He said the countries are complicit in plots with Greece and the Greek Cypriot administration.

He also noted the Ottoman conquest of Cyprus with 60,000 martyrs, in 1571. He said the island remained under Ottoman rule until 1878, when the British then took control and did not leave until the 1960s.

Tatar said his father and grandfather were there when the Republic of Cyprus was established in 1960, along with Turkish officials.

He said it was written in its constitution that two equal nations lived on the island, adding that although there had been an opportunity to solve the Cyprus issue in 1974, it did not happen.

"Because the Greeks never saw the Turks as equal. They said, 'we are more crowded, stronger; so we'll be everywhere, the whole of Cyprus will be ours,'" he recalled, noting that he always defended the TRNC's right to self-governance and self-determination.

"Now, the Turkish Cypriots should stand up for a new future. Some renovations are needed for a safer, promising future," Tatar said, adding that they would never forget their "Turkishness" as no progress can be made without acknowledging their national roots.

On hydrocarbons in the region, Tatar said the surest route would be for the TRNC to cooperate with Turkey in research and share resources.

Tatar pointed out that the Greeks did not share hydrocarbon resources with the Turkish side and did not attempt to negotiate, adding that they also responded negatively to the TRNC's proposals.

"In accordance with international law, agreements signed by the Greek side require the approval of the Turkish Cypriots. This is unlawful," he stressed.

No expectations from EU

Tatar said Greece and Greek Cypriots were members of the EU, and for that reason, the bloc needed to be careful.

"As it has a side, I do not expect anything," he said, adding that Turkey's stance on the matter was of great importance as it offered a "great advantage" for both countries.

Tatar said he has prioritized experience in choosing his cabinet.

He said there would be new names that would help raise future generations.

"There are two separate nations, two separate states in Cyprus. We continue to tell all the world about it," he said, noting that students from more than 100 countries were studying in the TRNC.

If we are not recognized diplomatically, it is because the U.N. is blocking it, he said, stressing that he is in contact with the authorities to achieve diplomatic recognition.

Overcoming embargoes, isolation and restrictions will be on the agenda, according to Tatar, who added, "it's against human rights to still not have direct flights."

Former Prime Minister Tatar, who ran as the candidate of the National Unity Party (UBP), became president after winning the second round of presidential elections last week with 51.74% of the votes against rival Mustafa Akıncı, who obtained 48.26%, according to the unofficial count.

The elections had been delayed due to the COVID-19 pandemic.

Over the decades, there have been several attempts to resolve the Cyprus dispute, all amounting to nothing. The latest attempt held with the participation of each of the island's guarantor countries came to an end with no signs of progress in Switzerland in 2017. The U.N. is expected to convene a meeting between the two sides, Turkey, Greece – the key ally of the Greek Cypriot administration – as well as former colonial ruler Britain.

Turkey, as a guarantor nation for the TRNC, is currently carrying out hydrocarbon exploration activities in the Eastern Mediterranean. Ankara has consistently contested the Greek Cypriot administration's unilateral drilling activities in the region, asserting that the TRNC also had a right to the area's hydrocarbon resources.