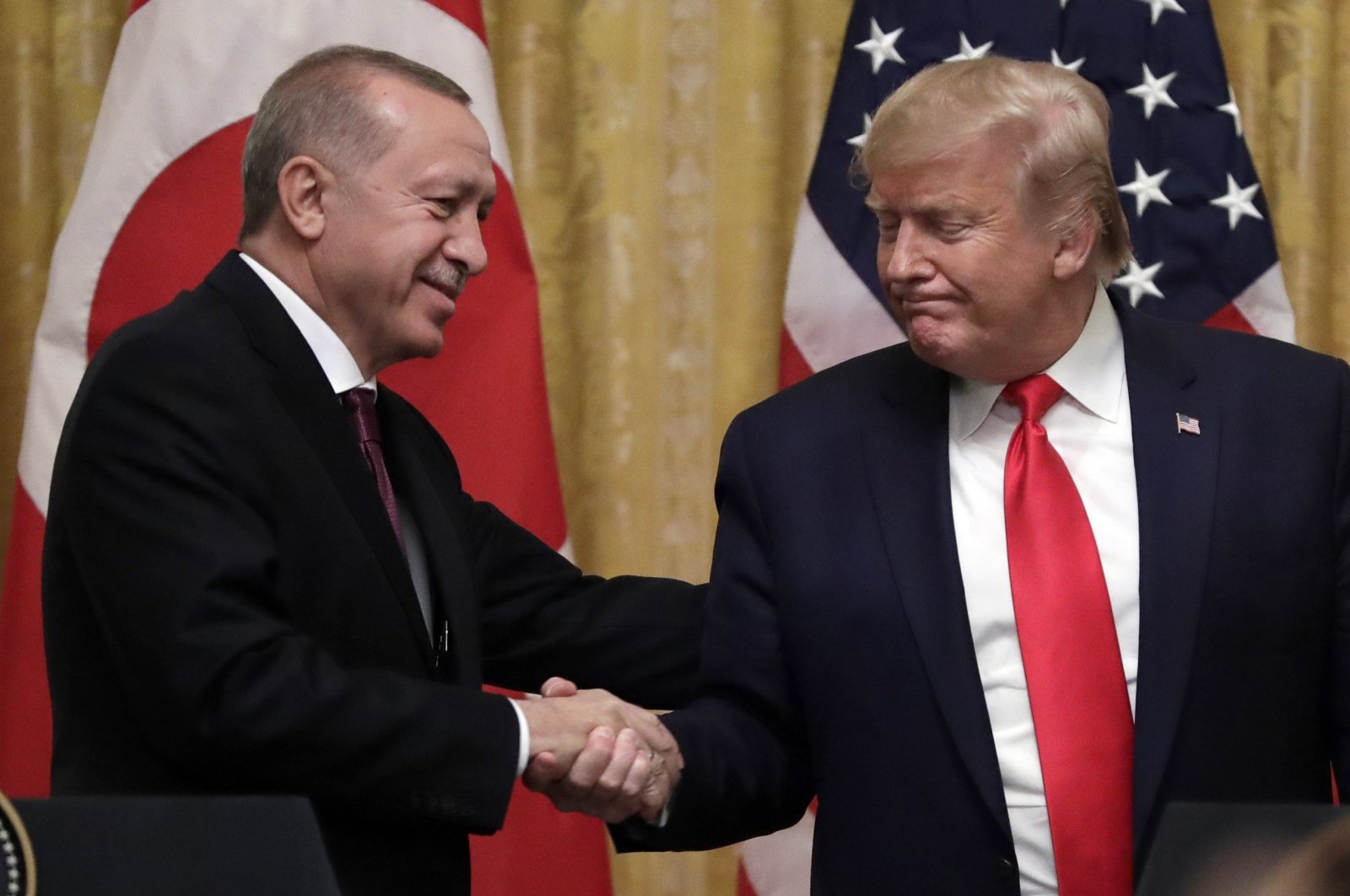 Speaking at a White House press conference, Trump focused on the U.S. withdrawal from Syria and how the move received major criticism as some interpreted the act as leaving the region to Turkey.

"Turkey is definitely capable of handling its work by itself," the president said and added, "We have really good relations with Erdoğan."

This is not the first time Trump has taken a stance in favor of Turkey against others. On Monday, he warned that Biden is "shot" and would not be able to stand up to the "world-class chess players," singling out the Turkish president among other world leaders.

"Let’s face it, Joe’s shot," Trump said during an interview on "Fox & Friends." "You’re dealing with people that are very sharp. You’re dealing with world-class chess players in the leaders of these countries. I know them all. We do very well with all of them, Erdoğan of Turkey. You can’t have a guy that doesn’t know where he is. You can’t have a guy that’s afraid to leave his basement because he can’t speak any longer," the president said.

Biden has made headlines with his recent controversial remarks on Turkey. In a video clip that went viral, Biden said he would seek a regime change in Turkey and expressed his willingness to work with the "opposition leadership" in the country to topple Erdoğan in Turkey’s 2023 elections.

"We can support those elements of the Turkish leadership that still exist and get more from them and embolden them to be able to take on and defeat Erdoğan. Not by a coup, not by a coup, but by the electoral process," he said.

Trump "yielded" to Turkey, said Biden, adding: "And the last thing I would’ve done is yielded to him with regard to the Kurds. The absolute last thing." Biden’s remarks illicitly conflated the Kurds with the terrorist group YPG/PKK in northern Syria, a group that attacks Turkish security forces, kidnaps children, including many Kurds and has tried to set up a terrorist statelet along Turkey’s borders.

The controversy over Trump’s Syria pullout has contributed to a climate of chaos in Washington, where Democrats heavily criticized the decision.

Biden’s remarks, recorded last December but first reported Saturday, drew condemnation from the entire political spectrum in Turkey, including both the government and opposition.

'No excuse for Biden's remarks'

The latest statements came from the head of the Nationalist Movement Party (MHP) Devlet Bahçeli Thursday. Underlining that there is no excuse for Biden's remarks, Bahçeli said the presidential candidate acts against the principles of alliance.

"The fact that he was a vice president back in the Obama era and has become a presidential candidate in the past seven months, of course, makes it necessary for us to take his anti-Turkey words seriously.

Reminding that during the Obama era, Turkey's ties with the U.S. had gone through a problematic period, Bahçeli said there is no way that the Turkish people will forget those days.

"It is well-known that the systematic and bloody attacks that were organized in the Middle East, as well as the establishment of bonds with the terrorist groups against Turkey, took place during the ruling era of these two names (Barrack Obama and Biden)," Bahçeli said, referring to the emergence of Daesh and U.S. partnership with the YPG terrorists.

During the two-term presidency of Obama, for whom Biden served as vice president, Turkey took a strong stand against the U.S. policies of financing and arming the YPG – which is an offshoot of the terrorist group PKK – in northern Syria. They also refused to extradite Fetullah Gülen, a U.S. resident and the so-called head of the Gülenist Terror Group (FETÖ), which carried out the defeated coup attempt in Turkey in July 2016.

Before the coup was defeated, FETÖ killed 251 people and wounded more than 2,200 in less than 12 hours on the night of July 15. Obama and Biden's failed Middle East policies, especially in Syria, also exacerbated relations with Turkey and set the stage for recent tension between the two NATO allies.

"Our country's recent history is the history of coups and within this history, there are too many conspiracies of other countries which claim to be allies," Bahçeli said, adding that Biden's words prove these two-face actions.

Prior to Bahçeli, many other Turkish politicians also reacted to Biden's controversial remarks, including the CHP.

Only the Turkish nation, not someone from the U.S., or another country, can decide to change its government and president, Foreign Minister Mevlüt Çavuşoğlu said Sunday.

"We strongly reject such impositions," Çavuşoğlu told Anadolu Agency (AA) following his meeting with U.S. Secretary of State Mike Pompeo in the Dominican Republic, adding that Biden's remarks are "ignorant" and fail to recognize the Turkish nation. He also said it was "strange" that a person who has been nominated to lead the U.S. made such "ignorant comments" on Turkey and that he doesn't know the truth about his own country.

Biden's remarks "reflect the games being played over Turkey and their interventionist attitudes," said Turkey's Communications Director Fahrettin Altun on Twitter. "These remarks are not in line with democracy and the nature of Turkish-American relations," he added.

"The analysis of Turkey by Joe Biden is based on pure ignorance, arrogance and hypocrisy. The days of ordering Turkey around are over," Kalın said on Twitter and added: "But if you still think you can try, be our guest. You will pay the price."

The head of the CHP, Kemal Kılıçdaroğlu, said his party's only aim is to fight for the independence of Turkey and thus, it is unacceptable to allow "the shadow of an imperialist power."

CHP spokesperson, Faik Öztrak, also criticized Biden's remarks. "Our democracy and endeavor for freedom do not need any imperialist favors. Independence is our character."

He assured that the opposition would act for the sake of the Turkish nation, not on the terms of foreign political actors.