Turkey: A pioneer in humanitarian aid during coronavirus era 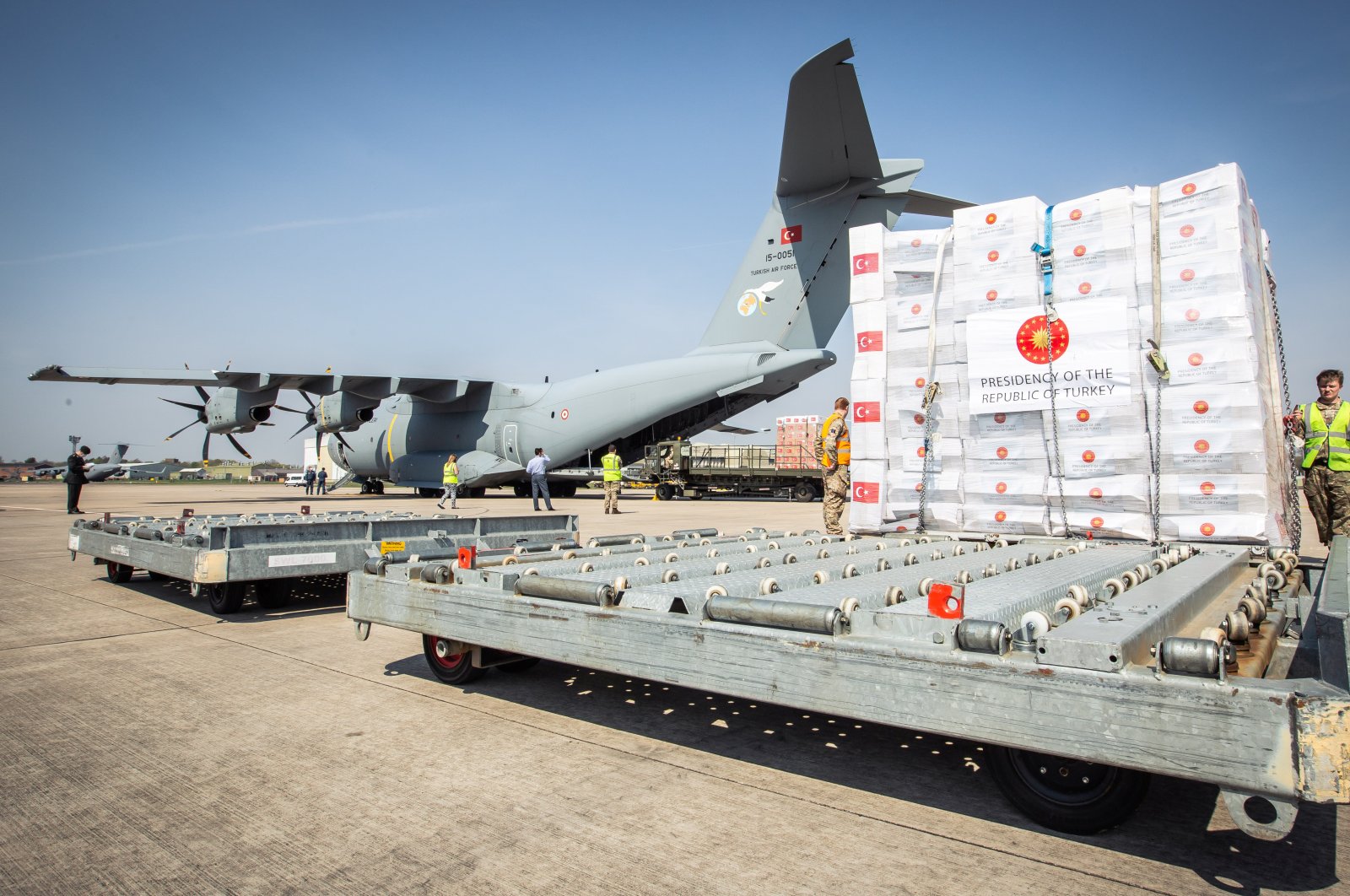 Crucial supplies of personal protective equipment (PPE) for medical staff are delivered from Turkey into a Royal Air Force base for distribution around the country, amid the coronavirus outbreak, in Carterton, Britain, April 10, 2020. (Reuters Photo)
by DAILY SABAH Apr 14, 2020 12:34 pm
RECOMMENDED

The COVID-19 pandemic has caused many changes in practices and principles, not only at the individual level but also at the state level. The nation-states, which, for many pundits, are going through a period of regaining their power, had to re-establish their way of relating both with the nation itself and with other fellow states, establishing new types of diplomatic interactions. One of the main bases of this new diplomacy is humanitarian aid, a major necessity since many countries do not have enough in their fight against the coronavirus. Turkey, as a country that has made a name for itself in the last decade with its humanitarian efforts, has already become a prominent figure of this fresh statecraft by sending medical aid packages to many corners of the globe every other day.

"So far, we have delivered medical equipment to 34 countries," President Recep Tayyip Erdoğan said Monday during a news conference following a Cabinet meeting in Istanbul. "We will continue our support (to other countries) in the upcoming days as well," he said.

Erdoğan's speech was an evaluation of the past month, during which Turkey has received aid requests from more than 90 countries. Managing to deliver medical equipment to 34 of them so far, the country has provided consultancy to many others, aiming to share its resources and experiences with the world in a period of crisis. Turkey's aid packages mostly include medical masks, protective overalls, and gloves as well as disinfectants. All equipment was produced at military-owned factories and at sewing workshops that produce military uniforms and other clothing for the army.

The latest country to benefit from Turkey's humanitarian efforts is Ukraine. The Ukrainian envoy to Ankara, Andrey Sibiga, announced Monday that his country will receive medical aid from Turkey.

"The Ukraine Health Ministry informed Turkey on which equipment the country needs. It is very nice for Turks to be so sensible," the envoy expressed.

Worldwide infections have surpassed 1.93 million with a death toll exceeding 120,000, according to U.S.-based Johns Hopkins University. Nearly 460,000 people have recovered.

Turkey praised for its efforts

Europe, as the epicenter of the pandemic, has become the continent that receives the most aid. Last week, two Turkish cargo planes landed in London to provide supplies to the U.K., followed by a set of deliveries to Italy and Spain, two of the worst-hit countries in both the continent and the world. Turkey received much gratitude from both European people and their leaders, as it filled a supply void in their struggle against the pandemic.

British Ambassador to Ankara Sir Dominick Chilcott published a video message on Twitter on Saturday, thanking the country for its support.

“I present my heartfelt thanks to our ally and friend Turkey for its generous present. We will all beat coronavirus with such examples of international cooperation,” the ambassador said. Chilcott also praised Turkey’s leadership in the coronavirus fight around the world, as it is voluntarily sending aid and necessary medical supplies to countries in need.

The ambassador went on to say the delivery of supplies comes at a difficult time and will save the lives of COVID-19 patients.

The delivery of the aid was covered extensively in the foreign press as well, and Turkey received thanks from British Twitter users.

“They did the same thing for Ireland in 1845 in the days of Great Famine. Well done Turkey,” said a user on the platform, referring to the Ottoman Empire’s aid to Ireland.

Health workers have complained about the lack of medical equipment in the U.K. and criticized their government as 19 health officials have died because of COVID-19.

“I’m sorry if people feel that there have been failings,” Home Secretary Priti Patel said at a daily Downing Street coronavirus briefing. Health Minister Matt Hancock emphasized the dire need for medical supplies, saying the equipment should be considered “valuable” and used only for clinical needs.

The masks, N95 masks and protective suits that Turkey sent to the U.K. Friday were accompanied by a quote by Sufi mystic Rumi: “After hopelessness, there is much hope and after darkness, there is the much brighter sun."

Similarly, Italian Foreign Minister Luigi Di Maio thanked Turkey for helping his country in its struggle against the coronavirus. “Today’s help is very important to us. We thank President (Recep Tayyip) Erdoğan, Foreign Minister (Mevlüt) Çavuşoğlu and all Turkish people for their solidarity," he said.

Kosovo’s president also praised Turkey’s help in mitigating the spread of the coronavirus. Hashim Thaci took to Twitter to express his gratitude. “We accepted a package of medical aid as assistance from Turkey to Kosovo to help fight COVID-19. Deeply grateful to President Erdogan and Turkey for supporting Kosovo in this unprecedented time,” he tweeted.

The deputy assistant secretary of defense for European and NATO policy at the Pentagon, Michael Ryan, on Thursday, lauded Turkey’s delivery of medical supplies to Spain and Italy.

“Spain and Italy were grateful for this help. I do not know whether Turkey has helped another country in Europe, but if it has, I would not be surprised. Turkey is a very generous country,” Ryan stated during the Pentagon’s video news conference.

Ryan underlined that various forms of cooperation had occurred between NATO nations in the fight against the pandemic, while accusing Russia and China of launching disinformation campaigns against NATO countries.

International organizations also praised Turkey for its support, stating that it has an "exemplary" attitude during such a difficult time.

NATO's strategic military command last week welcomed Turkey's delivery of medical aid to Bosnia-Herzegovina, among other Balkan countries, in the fight against the coronavirus pandemic.

"Turkey provided aid to Bosnia and Herzegovina to assist in the fight against #COVID19," the Supreme Headquarters Allied Powers Europe (SHAPE) said on Twitter.

"NATO Allies and partners continue to support each other during this pandemic and show we are Stronger Together," it expressed.

The World Health Organization (WHO) chief also praised Turkey for showing “exemplary” solidarity with the coronavirus-hit countries, while his top aide said the country has a “huge history” of large-scale disaster management and of offering support to other countries.

Tedros Adhanom Ghebreyesus made the remarks at a video news conference in response to a question on Turkey’s dispatching of essential supplies to European countries and others amid the coronavirus outbreak.

Tedros said he had joined the presidents of Turkey, Azerbaijan, Kazakhstan, Kyrgyzstan, and Uzbekistan on Friday morning through the Turkic Council.

“All the leaders agreed that they should cooperate among themselves as a regional entity, but also cooperate with these other countries and support countries who need support,” he said.

“I also appreciated the president of Turkey, President Erdoğan, for the contributions he has made, starting from neighboring countries and beyond, as has been said in medical supplies,” the WHO chief said.

He said this was the “solidarity principle” the WHO has advocated to fight the pandemic.

“And that’s why I appreciate their contribution. And that’s what we should continue to do. While doing our best in our borders, we should also support those who need our support,” the WHO chief added.

Tedros said that what Turkey and other countries in the Turkic Council were doing “is actually exemplary. And I hope all countries will adhere to the principle of solidarity and fighting this invisible but dangerous enemy together.”

Aid has not only been sent to ally countries, but also to ones with a long history of disagreements with Turkey.

These kinds of requests (for assistance) came from Israel, he said. "We didn’t differentiate between countries or regions, and we won’t. This is independent from our political relations,” Kalın said, stressing that the COVID-19 pandemic was an emergency.

Turkey has strained relations with Israel. Israel’s discriminatory treatment of Palestinians remains a major source of tension in Israeli-Turkish relations.

Turkey has a long tradition of sending humanitarian aid to countries facing difficulties, even for those it has tense diplomatic relations with. For instance, back in 1938, only a decade after the country’s foundation following a bloody war, Turkey sent medicine to China amid the outbreak of cholera in far-east Asia. Similarly, in 1941, Turkey sent medicine to the Greek army upon demand from Greece, a country that fought against Turkey during the liberation war. Similar aid has been provided to many other countries over the years, including Etiopia, Bangladesh and Afghanistan.