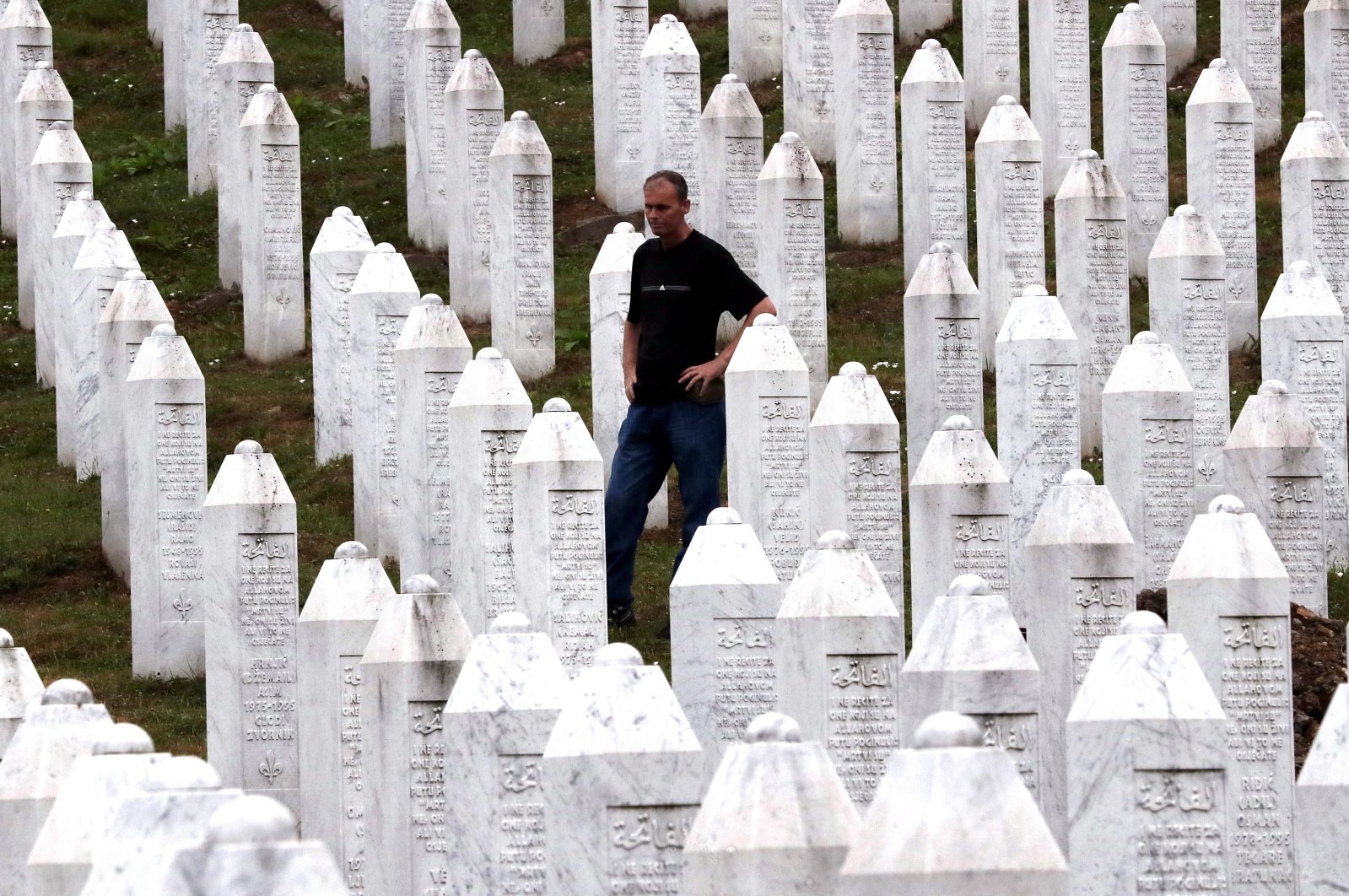 A Bosnian Muslim man mourns while touching a gravestone during a funeral ceremony for nineteen newly-identified Bosnian Muslim victims, at the Potocari Memorial Center and Cemetery, in Srebrenica, Bosnia-Herzegovina, July 11, 2021. (EPA Photo)
by DAILY SABAH WITH AA Jul 11, 2021 12:58 pm
RECOMMENDED

Turkey Sunday marked the 26th anniversary of the 1995 Srebrenica genocide, in which over 8,000 Bosnian civilians were brutally killed by Serbian forces.

In a video message, President Recep Tayyip Erdoğan commemorated those who lost their lives in the genocide.

Turkey will continue to stand with Bosnia-Herzegovina and Bosnians, he said.

Turkey will never let the genocide, which is "a black mark in the history of Europe and humanity," be forgotten, he added.

"The wounds Srebrenica opened in our hearts are still bleeding although 26 years have passed," Erdoğan said.

Vice President Fuat Oktay on Twitter quoted a statement by Alija Izetbegovic, independent Bosnia's first president: "Whatever you do, don't forget the genocide. Because the forgotten genocide is repeated."

"We have not forgotten, we will not forget ... On the 26th anniversary of the #Srebrenica genocide, I commemorate our 8,372 Bosnian brothers who were martyred. May their place be in heaven," he said.

Foreign Minister Mevlüt Çavuşoğlu also tweeted an image that said: "July 11, 1995. We did not forget and we will not forget the Srebrenica genocide."

"On the 26th anniversary of the #Srebrenica Genocide, the black mark of human history, I wish Allah's mercy on those who were martyred in this persecution, and patience for their families and our Bosnian brothers and sisters," he wrote.

More than 8,000 Bosnian Muslims were killed when Bosnian Serb forces attacked Srebrenica in July 1995, despite the presence of Dutch peacekeeping troops.

Serb forces were trying to wrest territory from Bosnian Muslims and Croats to form a state.

The United Nations Security Council declared Srebrenica a "safe area" in the spring of 1993. But troops led by Gen. Mladic overran the U.N. zone. He was later found guilty of war crimes, crimes against humanity and genocide.

Bodies of victims have been found in 570 different areas across the country.

In 2007, the International Court of Justice at The Hague ruled that genocide had been committed in Srebrenica.

On June 8, U.N. tribunal judges upheld in a second-instance trial, a verdict sentencing Mladic to life in prison for the genocide, persecution, crimes against humanity, extermination and other war crimes in Bosnia-Herzegovina.