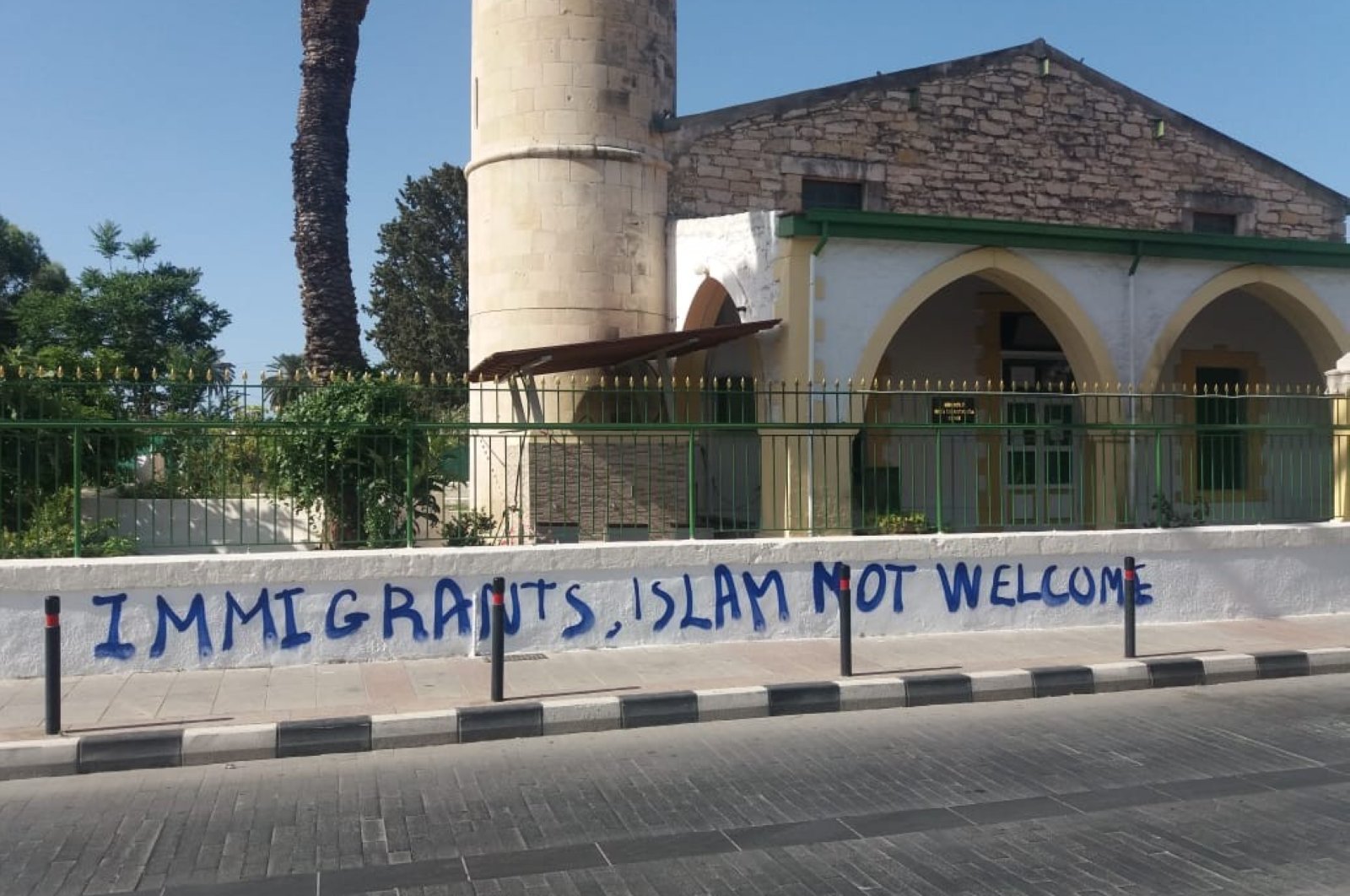 Vandalism on the walls of Köprülü Haci İbrahim Ağa Mosque in the Greek Cypriot-administered province of Limassol, June 1, 2020. (AA Photo)
by daily sabah Jun 02, 2020 10:33 am
Edited By Eralp Yarar
RECOMMENDED

Turkish officials have strongly condemned a recent attack on a mosque in the Greek Cypriot-administered city of Limassol, urging the administration to take immediate action against the perpetrators of the attack.

“We condemn the heinous attack carried out with Molotov cocktails against the Köprülü Hacı İbrahim Ağa Mosque in Limassol, in the Greek Cypriot Administration of Southern Cyprus," the Foreign Ministry said in a statement Monday, adding: "We share the statements made by the authorities of the Turkish Republic of Northern Cyprus concerning the attack.”

The ministry continued by saying that the Greek Cypriot Administration ought to take necessary measures to protect freedom of worship and should immediately find the culprits.

“It is obvious that Islamophobic rhetoric and actions will not contribute to the efforts toward reaching a settlement on the Cyprus issue. It should not be forgotten that such attacks do not only target Muslims but also pose a common threat to all of humanity,” the statement read.

“I strongly condemn the attack on the century-old Köprülü Mosque in Limassol in Greek-administered Southern Cyprus,” Oktay said on Twitter.

He continued by saying that Turkey expects the Greek Cypriot Administration to immediately find and hold the perpetrators accountable for their crime.

“As Turkey, we will continue to stand against all acts of violence,” Oktay added.

“(The administration) needs to fight against political and media rhetoric that encourages anti-Muslim sentiment,” Çelik said, adding that they also need to immediately find the perpetrators.

On Tuesday, the Greek Cypriot Administration condemned the attack, saying that an investigation into the incident had been launched. An official statement released by the administration said: “The government strongly condemns the vandalism that targeted the Köprülü Mosque in Limassol.”

Underlining that such actions targeting sanctuaries would not be accepted under any conditions, the statement added that an order to investigate the incident and find the culprits had been given.

The Molotov cocktail attack on Sunday was coupled with the spray-painting of anti-migrant and anti-Muslim slogans on the mosque's outer walls.

The island has been divided between a Turkish Cypriot government in the northern tier and Greek Cypriot administration in the south since a 1974 military coup aimed at Cyprus' annexation by Greece.

Turkey's intervention as a guarantor power in 1974 put a halt to years of persecution and violence lodged against Turkish Cypriots by ultranationalist Greek Cypriots. The TRNC was founded in 1983.