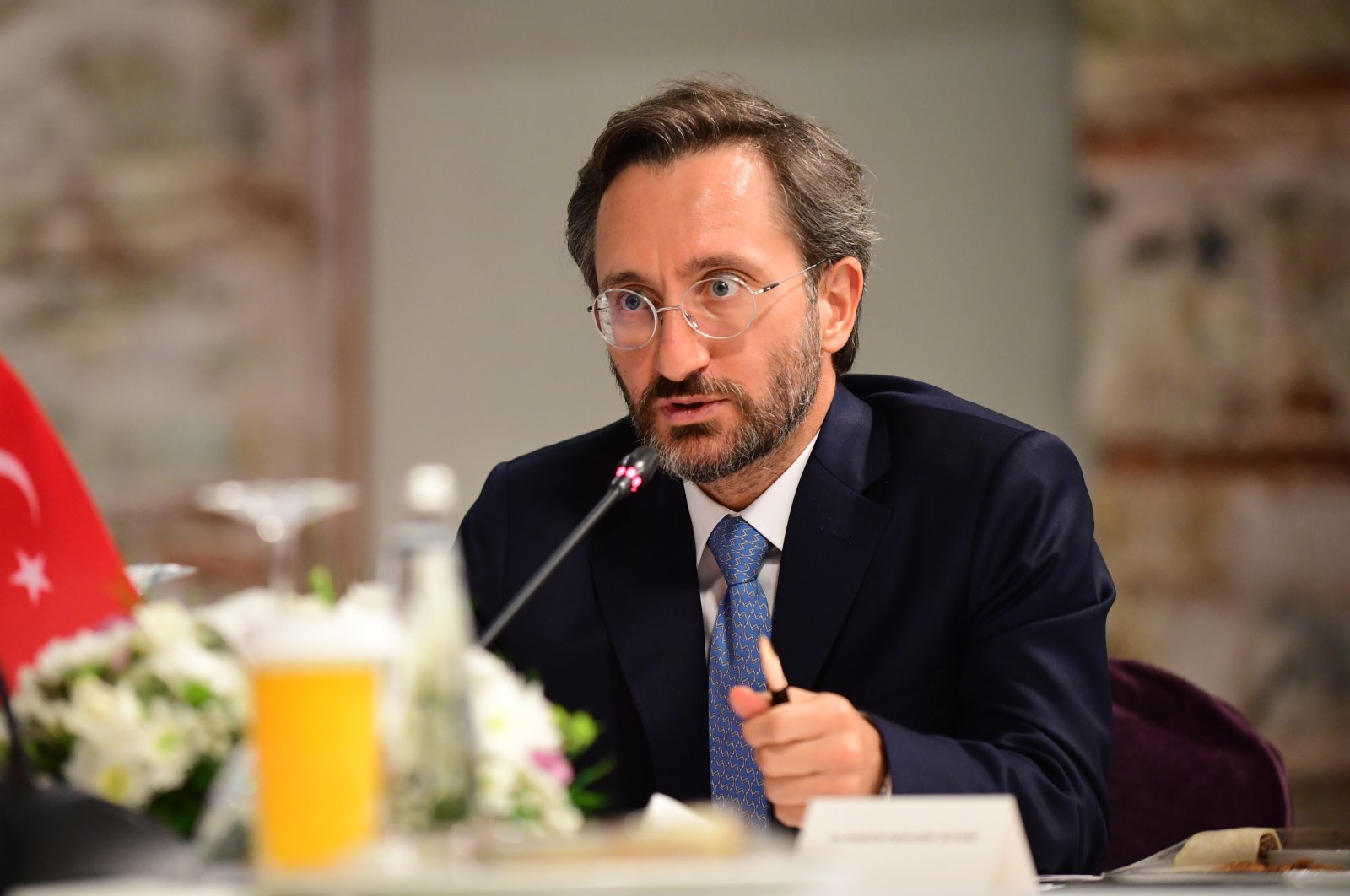 Fahrettin Altun, the head of Turkey's Communications Directorate, speaks during a meeting with Azerbaijani officials in Istanbul, Sept. 7, 2020. (AA Photo)
by DAILY SABAH WITH AA Sep 09, 2020 11:51 am
RECOMMENDED

Turkey on Tuesday condemned a Greek website which posted personal information about a Turkish reporter working in Greece, apparently in an attempt to intimidate him.

"We strongly condemn this outdated approach. Our reporters will carry out their duties under the guarantee of the state of the Republic of Turkey. No fascist element can prevent it," Fahrettin Altun, the head of Turkey's Communications Directorate, said on Twitter.

The website also published a photo from Durul's passport and information on Mehmet's birthplace.

Turkey's ruling party Friday condemned the Greek website for publishing the private details of AA staff, labeling them as spies.

"It is barbaric how fascists are targeting Anadolu Agency staff in Greece," Ömer Çelik, spokesperson for the Justice and Development Party (AK Party), said on Twitter.

Çelik said it is "unacceptable for the Greek authorities to avoid the issue."

Journalists need to be protected during their work, and national authorities should investigate all kinds of attacks against them, the European Commission's press service also said Friday.

The institution's chief spokesperson, Eric Mamer, and his colleague responsible for justice and rule of law affairs, Christian Wigand, reacting to the Greek website targeting AA staff, said the European Union had "a clear commitment to media pluralism and media freedom."

"Journalists need to be protected during their work," Wigand said.

"Journalists must be allowed to operate ... even when there are tensions (between two countries) in a manner which allows the public to be informed," Mamer added. He also pointed out that EU member states had the responsibility to ensure these rights of press freedom.

"In the EU, we have rule of law and a system in place where the member states are responsible to carry out investigations on allegations or acts of violence against journalists," he said.

According to media reports, Greek authorities recently deployed military elements to the island of Kastellorizo.

Turkey slammed the move, as the island has had a demilitarized status since the 1947 Paris Peace Treaties.

The 10-square-kilometer (3.86-square-mile) island has been cited by Greece as justifying thousands of miles of maritime jurisdiction, even though it is only 2 kilometers (1.24 miles) from Turkey but nearly 520 kilometers from Greece and ignoring Turkey's longer Mediterranean coastline compared with any other country.

Tensions between the two neighbors recently escalated over the issue of energy exploration in the Eastern Mediterranean. Greece seeks to block Turkey's exploration of energy resources in the region, which Ankara says is well within its rights. Athens has attempted to restrict Turkey's maritime territory, trying to box it into its shores based on a small number of Greek islands' proximity to the Turkish coast.

Turkey has argued that the sides should instead sit down for dialogue to reach a win-win solution based on the fair sharing of resources. On the other hand, Greece pushes the European Union to impose sanctions against Turkey, while France and the Greek Cypriot administration are two other member states which fiercely support Athens’ initiatives.

Commenting on the possible EU sanctions, Turkey's Treasury and Finance Minister Berat Albayrak told Bloomberg on Wednesday: “They should put themselves in Turkey’s shoes: Which European country would accept the map that’s being imposed on us? The EU shouldn’t so easily give up on international law and justice when it comes to Turkey.”

Albayrak added: “When judged individually, Turkey is in a strong, mutually beneficial relationship with a big majority of the EU member countries. But when it comes to the EU as a whole, one or two countries establishing a united front against Turkey due to political motives, electoral concerns put at risk benefits for the entire group of EU nations. The joint stance by Greece and France at the moment benefits neither those two countries nor the EU. We are confident that they will recognize their mistake when they adopt some common sense, but we hope that doesn’t happen too late.”