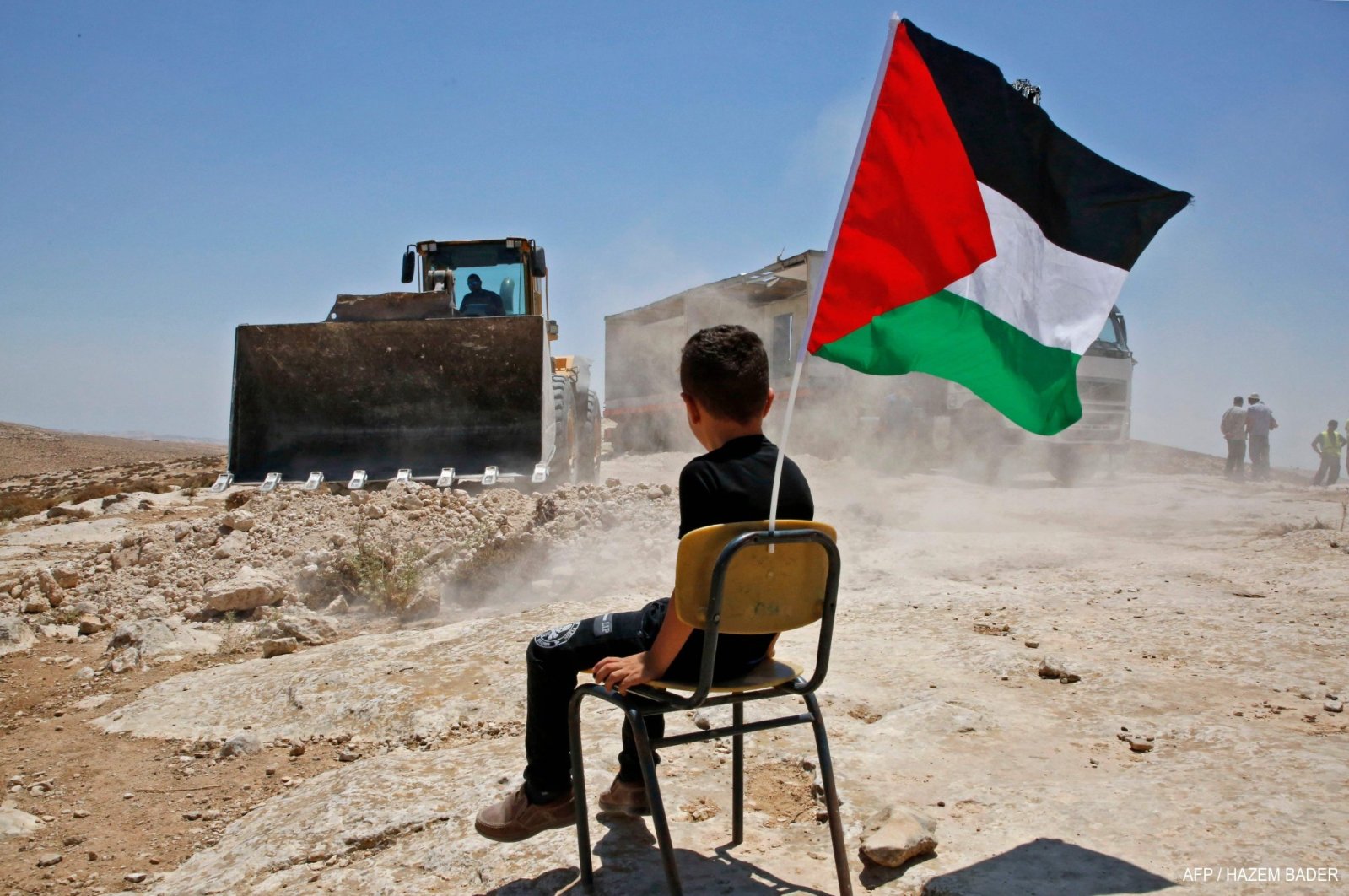 A Palestinian boy sits on a chair with a national flag as Israeli authorities demolish a school in the soon-to-be-relocated village of Yatta, south of the West Bank city of Hebron, July 11, 2018. (AFP File Photo)
by DAILY SABAH WITH AA Nov 06, 2020 10:37 am
RECOMMENDED

The Turkish Foreign Ministry late Thursday condemned Israel for its continuous "aggressive and unlawful policy" over the destruction of Palestinian structures across the West Bank.

"Israel once again showed its aggressive and unlawful policy by demolishing more than 70 Palestinian settlements, education and health care facilities in the occupied Jordan Valley and deciding to evacuate and demolish 200 Palestinian businesses in the center of east Jerusalem," the ministry said in a statement.

These steps were taken during the coronavirus pandemic, which increases the severity of the situation, it added.

Underscoring that 689 structures have been demolished across the West Bank so far in 2020, including in east Jerusalem, it said this destruction led to the displacement of some 869 Palestinians.

Turkey will continue to reject those unlawful and inhumane acts deepening the Israeli occupation in Palestinian territories and destroying the two-state solution vision, it added.

It reiterated that Turkey will continue to stand by the Palestinian people and defend the right cause of Palestine.

In 2020, the occupied West Bank has dealt with more destruction than it has seen in years, according to a U.N. official.

"So far in 2020, 689 structures have been demolished across the West Bank, including east Jerusalem, more than in any full year since 2016," Yvonne Helle, the humanitarian coordinator ad interim for the occupied Palestinian territory, said in a recent statement.

Helle said Israeli authorities generally claim a lack of Israeli-issued building permits as a reason for their actions.

She stressed, however, that Palestinians can almost never get such permits due to the "restrictive and discriminatory planning regime."

"Demolitions are a key means of creating an environment designed to coerce Palestinians to leave their homes," Helle said.

"The largest forced displacement incident in over four years" took place on Tuesday in the Palestinian community of Humsa Al Bqai'a, located in the Jordan Valley, Helle highlighted.

"Some 73 people, including 41 children, were displaced when Israeli authorities demolished their homes and other structures and destroyed belongings," she said.

She added that humanitarian agencies confirmed 76 demolished structures in the Palestinian community, the highest number in a single demolition in the last decade.

The settlements are one of the most heated issues facing the Israeli-Palestinian peace talks, frozen since 2014. The international community regards all Israeli settlements in the occupied Palestinian territories to be illegal and a major obstacle to Middle East peace.

Israel captured the West Bank in the 1967 Six-Day War, and more than 400,000 settlers now live there among some 3 million Palestinians. Palestinians, who seek a state in the West Bank, Gaza and east Jerusalem, say the settlements, viewed by most nations as illegal, make a future country unviable.