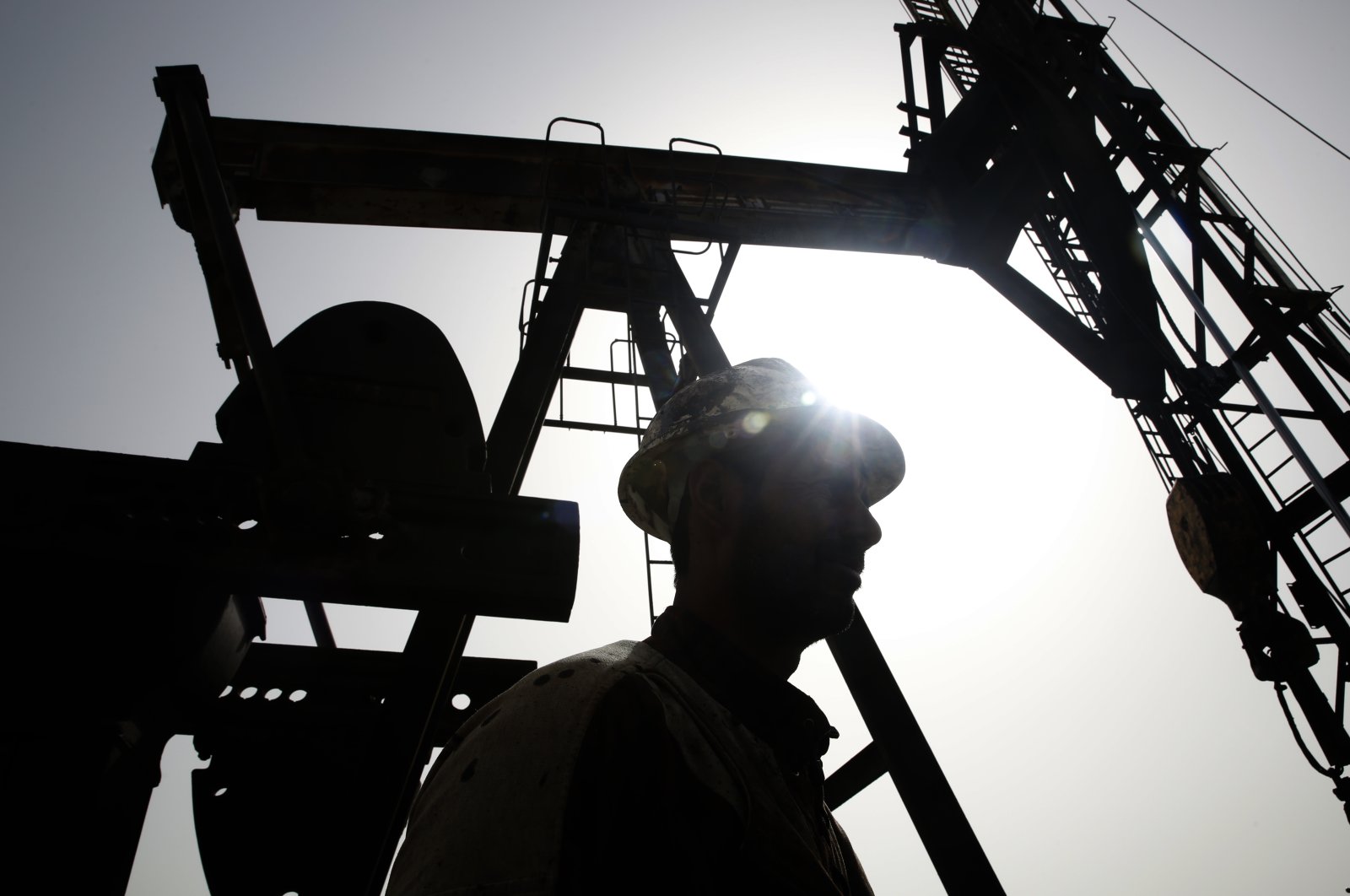 A silhouetted Syrian oil worker stands next to a pump at an oil field controlled by a YPG-linked group in Rmeilan, Hassakeh province, Syria, March 27, 2018. (AP File Photo)
by daily sabah Aug 03, 2020 10:29 am
Edited By Şeyma Nazlı Gürbüz

The Turkish Foreign Ministry has condemned an oil agreement between an American company and the terrorist YPG in northern Syria for “financing terrorism,” saying that the country’s natural resources belong to the Syrian people.

In a statement, the Foreign Ministry said the YPG’s move has clearly shown its goal to divide Syria and exploit its natural resources.

The ministry also criticized the U.S. government for supporting the deal, which disregards international law and Syria’s territorial integrity, unity and sovereignty and finances terrorism.

"We regret the U.S. support for this step that ignores international law and that targets Syria's territorial integrity and sovereignty," the ministry said in the statement.

The YPG recently signed a deal with U.S.-based Delta Crescent Energy LLC to extract, process and trade oil in northern Syria, according to a statement by the terrorist group.

A U.S. senator and Secretary of State Mike Pompeo had referred to the oilfields deal during a Senate Foreign Relations Committee hearing on Thursday.

Republican Senator Lindsey Graham said during the committee hearing that YPG ringleader Ferhat Abdi Şahin codenamed Mazloum Kobani informed him that a deal had been signed with an American company to “modernize the oil fields in northeastern Syria”, and asked Pompeo whether the administration was supportive of it.

“We are,” Pompeo responded during the hearing streamed live by PBS. “The deal took a little longer ... than we had hoped, and now we’re in implementation.”

Meanwhile, Damascus condemned “in the strongest terms the agreement “to steal Syria’s oil under the sponsorship and support of the American administration,” a statement by the foreign ministry said. “This agreement is null and void and has no legal basis.”

Syria produced around 380,000 barrels of oil per day before the civil war erupted following a crackdown on protests in 2011, with Iran and Russia backing Bashar al-Assad’s regime and the United States supporting the opposition.

The U.S. support for YPG in Syria has become one of the stumbling blocks in bilateral ties between the two NATO allies.

After announcing the withdrawal of U.S. troops from Syria twice, President Donald Trump has added more complexity to the American military's mission in the region by claiming a right to Syria's oil.

Extending the mission to secure eastern Syria's oil fields happens to fit neatly in with the Pentagon's view, supported by some Trump allies in Congress, that a full withdrawal now could hasten a revival of Daesh, even after terrorists lost their leader Abu Bakr al-Baghdadi in a U.S. raid.

A quiet arrangement has existed between the terrorists and the Syrian regime, whereby Damascus buys the surplus through middlemen in a smuggling operation that has continued despite political differences. The oil was expected to be a bargaining chip for YPG terrorists to negotiate a deal with the Syrian regime, which unsuccessfully tried to reach the oil fields to retake them from Daesh.

The U.S., which has designated the PKK as a terrorist organization, still allies itself with the SDF in Syria, which mainly consists of YPG terrorists. Turkey wants YPG commanders removed from the SDF's top ranks and Sunni Arabs, together with non-YPG Kurds, included in the lower ranks.

Pentagon spokesman Jonathan Hoffman said back in 2019 that the income from oil fields in northern Syria went to the YPG and the U.S. did not obtain the income.

In October, Turkey launched Operation Peace Spring to eliminate YPG terrorists from the area east of the Euphrates River in northern Syria to secure Turkey's borders, aid in the safe return of Syrian refugees and ensure Syria's territorial integrity.

Besides Operation Peace Spring, Turkey carried out two other cross-border operations west of the Euphrates River – Operation Euphrates Shield in August 2016 and Operation Olive Branch in January 2018 – to drive out terrorists, including the YPG and Daesh, from its borders. Turkish and Free Syrian Army (FSA) forces entered Afrin town center and liberated it from terrorists on March 18.

While Turkey liberated northwestern territories from Daesh, it also prevented the YPG from establishing a de facto autonomous region in Syria connecting northwestern Afrin to Kobani and Jazeera in the northeast, which Ankara describes as a "terror corridor," posing a grave security threat to Turkey's national security.