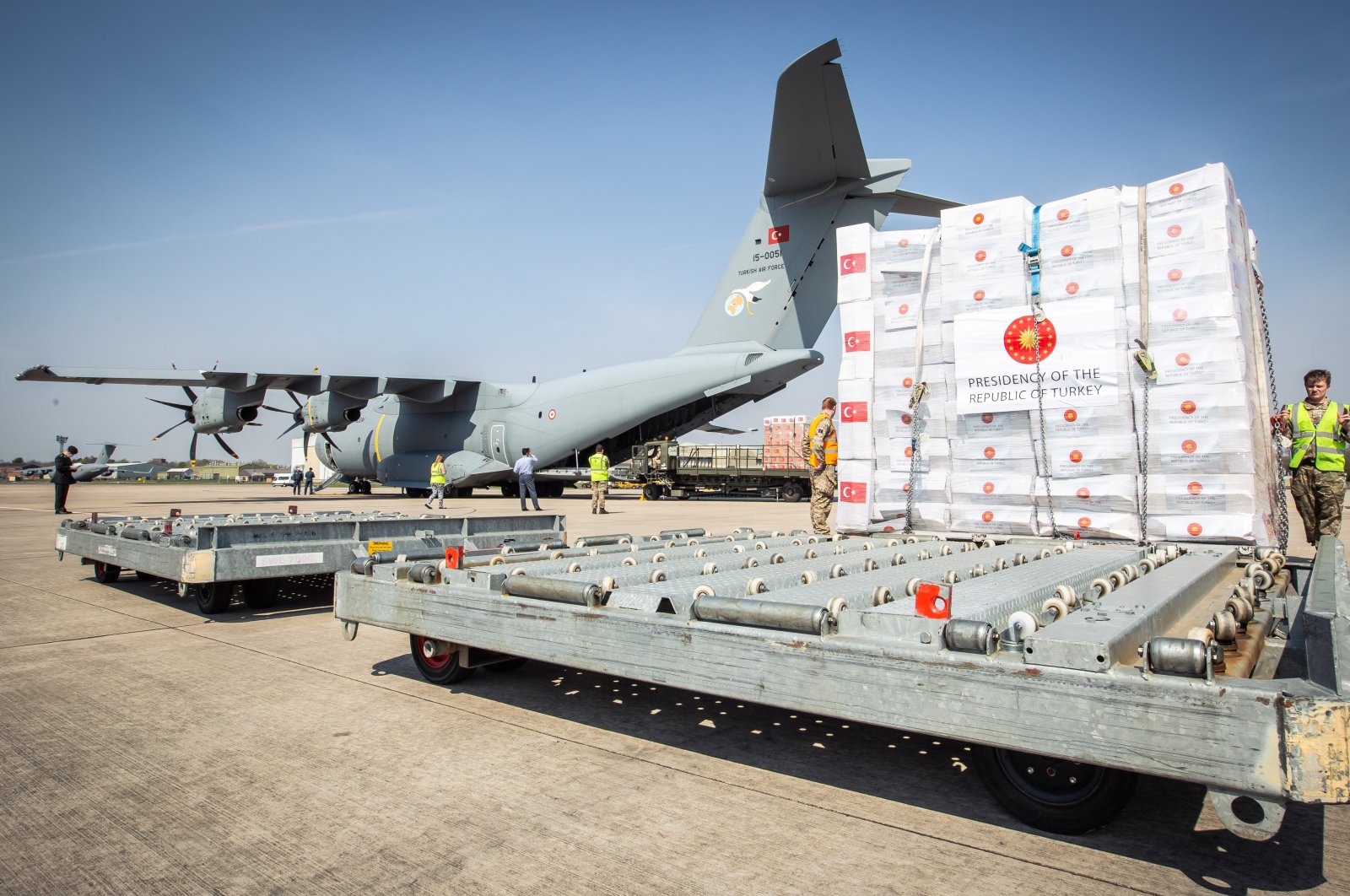 Crucial supplies of personal protective equipment (PPE) for medical staff are delivered from Turkey to a Royal Air Force base for distribution around the country, amid the coronavirus outbreak, in Carterton, Britain, April 10, 2020. (REUTERS Photo)
by DAILY SABAH WITH AA Dec 21, 2020 12:17 pm
RECOMMENDED

"As the most generous country in the world, we continue to give our helping hand to the needy people during the outbreak and to be the voice of the oppressed," said Mevlüt Çavuşoğlu on Twitter Sunday.

He also quoted Turkish President Recep Tayyip Erdoğan, as saying: "Civilization is not a matter of means, but of conscience."

This September, speaking on the U.N.'s 75th anniversary, Erdoğan said: "As the most generous aid donor country, in terms of the ratio of Turkish assistance to its GDP, we tried to alleviate the problems caused by the pandemic with our available means."

Last week, Erdoğan stressed the importance of international solidarity and aid during the pandemic, noting that Turkey had provided aid to some 156 countries and nine international organizations since the virus emerged in China about a year ago.

During the pandemic, Turkey has provided funds, doctors, personal protective equipment (PPE), reverse-transcription polymerase chain reaction (PCR) testing kits and other assistance to numerous countries in Africa, Asia and Europe, including 1,300,000 N-95 masks and 300,000 reverse-transcription polymerase chain reaction testing kits in April alone. By setting itself up as a provider rather than a recipient of aid, Turkey has proved itself a valuable partner in combating the global spread of COVID-19.

Just after the outbreak of COVID-19 in China, Turkey was one of the first countries to provide medical assistance to the Asian country. The first aid packages were delivered to China on Jan. 31, with protective overalls, 93,500 medical masks, 500 medical protective glasses and 10,000 nonsterilized pieces of equipment. Since then, Turkey has sent medical aid packages to many corners of the globe, including developed Western countries and NATO allies.

Turkey will continue to implement an entrepreneurial and humanitarian foreign policy in the field and at the table in 2021, Çavuşoğlu said last month during a presentation on the ministry's budget and structure as well as foreign policy goals and priorities at the Plan and Budget Commission of Parliament.

The International Human Solidarity Day is an international annual unity day of the United Nations and its member states introduced by the general assembly during the 2005 World Summit. It was established on December 22, 2005 by resolution 60/209. Its main goal is to recognize the universal values of the poor by making the associated countries aware of reducing poverty and to formulate its countermeasures as signed by the independent states. The day is also a part of World Solidarity Fund and United Nations Development Programme focused on to achieve goals set for worldwide poverty eradication.