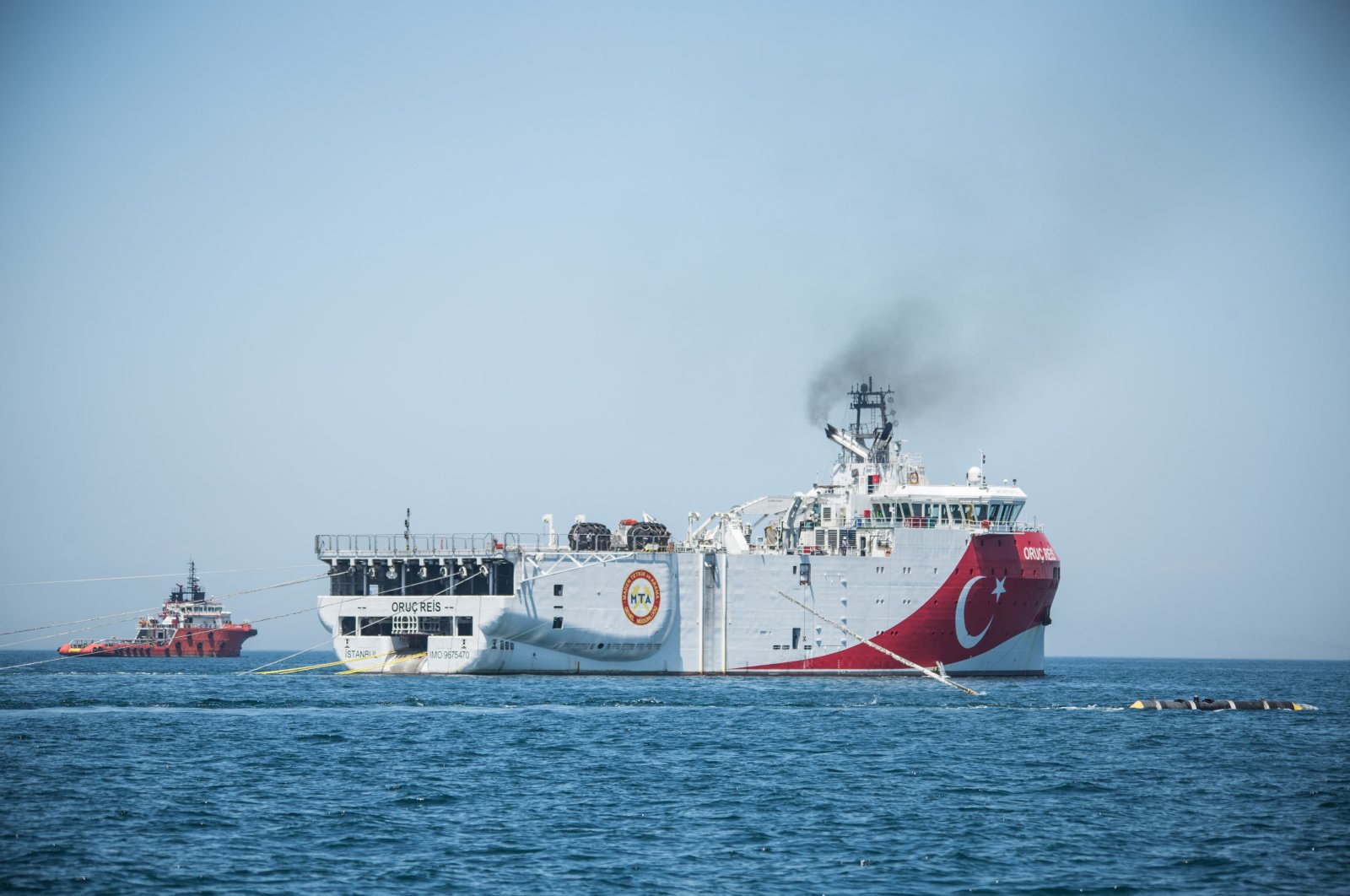 The Turkish Foreign Ministry strongly condemned the joint declaration by Greece, Egypt, France, the Greek Cypriot administration and the United Arab Emirates (UAE) claiming that Turkey's activities in the Eastern Mediterranean are “illegal.”

"The joint declaration of the ministers of foreign affairs of Egypt, Greece, GCA (Greek Cypriot administration), France and the UAE on the Eastern Mediterranean and Libya, is a case in point of the hypocrisy of a group of countries who are seeking regional chaos and instability through the policies they pursue and seeing no harm in sacrificing the democratic aspirations of the people to the callous aggression of putschist dictators, and which have fallen into delirium, as their agendas are being disrupted by Turkey," Foreign Ministry spokesman Hami Aksoy said in a statement Monday.

The foreign ministers of Greece, Egypt, France, the UAE and a representative from the Greek Cypriot administration held a videoconference meeting on Monday.

A joint declaration released after the meeting criticized Turkey's activities in the Eastern Mediterranean.

Aksoy blasted Greece and the Greek Cypriot administration for "relying on irrelevant non-regional actors,” which he said “can only be the legacy of a mentality of mandate and colonialism,” rather than engaging in dialogue with Turkey and TRNC (the Turkish Republic of Northern Cyprus) on the Eastern Mediterranean.

"The distortion of the steps taken by Turkey in order to protect its legitimate interests based on international law, through unfair and unlawful pretexts, is unacceptable under any circumstances," Aksoy stressed.

He said the rulers of Egypt do not protect the rights and interests of their own people, as they already preferred renouncing them.

With respect to the UAE, Aksoy said the country has no concern about the Eastern Mediterranean but has united with the other countries in this regard as a result of animosity toward Turkey.

Turkey's anti-terror operations in northern Syria also led France to attempt "to be the patron of this axis of malice," he added.

"We call on all these countries to act with common sense, in accordance with international law and practices. Peace and stability in our region can only be achieved through genuine and realistic dialogue and cooperation rather than attempting to create an axis of malice," Aksoy added.

The Libyan government also condemned the joint declaration on the same day, saying that the statements were interfering in Libya's domestic affairs.

"The memorandum of agreement signed between Turkey and Libya regarding the limitation of maritime jurisdiction and security, military cooperation, was signed between two governments of states that have a coast on the Mediterranean. It does not concern a third party. We are astonished that the UAE, which does not have a coast on the Mediterranean, is on the joint declaration. It seems they have different intentions. The fact that the UAE is part of this is to support another country attacking the Libyan people," a statement of Libya's foreign ministry said, adding that the countries signing the declaration were turning a blind eye to the crimes warlord Khalifa Haftar conducted on civilians and diplomatic missions.

“As Turkey spoils the interests in the region, some increase their dosage of hostility, yet this has no benefit for themselves nor for the region. While the whole world combats the novel coronavirus pandemic, some powers and their offshoots in the region try to slyly further their plans of seizing the rights of the Turkish Cypriots and Turkey in the Eastern Mediterranean,” he said in a written statement on Tuesday.

In May 2019, Turkish-flagged drillships began offshore drilling operations in areas off the coast of Cyprus. The areas fall entirely within the Turkish continental shelf registered with the United Nations and in permit licenses the Turkish government in previous years granted to Turkish Petroleum, the country's national oil company.

Turkey wants to see energy as an incentive for political resolution on the island and peace in the wider Mediterranean basin, not a catalyst for further tensions

In January, the Greek Cypriot administration issued arrest warrants for crew members of the ships and officials of companies cooperating with Turkish Petroleum.

Last November, Ankara and Libya's government founded in 2015 under a U.N.-led political deal signed a pact on maritime boundaries of countries in the Eastern Mediterranean.

The pact asserted Turkey's rights in the Eastern Mediterranean in the face of unilateral drilling by the Greek Cypriot administration, clarifying that the TRNC also has rights to the resources in the area.

The Cyprus problem has remained unresolved for decades despite a series of efforts by the United Nations for a lasting settlement between the Turkish and Greek Cypriots. The latest attempt to resolve the problem in Switzerland failed in 2017 and recent tensions in the Eastern Mediterranean have further complicated efforts for a settlement. The Greek Cypriot administration continues to oppose recognizing the political equality of Turkish Cypriots and claims to be the island's sole legitimate government.

The island has been divided into a Turkish Cypriot government in the northern third and a Greek Cypriot administration in the south since a 1974 military coup aimed at Cyprus' annexation by Greece. Turkey's intervention as a guarantor power in 1974 had stopped yearslong persecution and violence against Turkish Cypriots by ultranationalist Greek Cypriots. In 1983, the TRNC was founded on the northern third of the island and is only recognized by Turkey. It continues to face a longstanding embargo in commerce, transportation and culture. The decades since have seen several attempts to resolve the Cyprus dispute, all ending in failure.