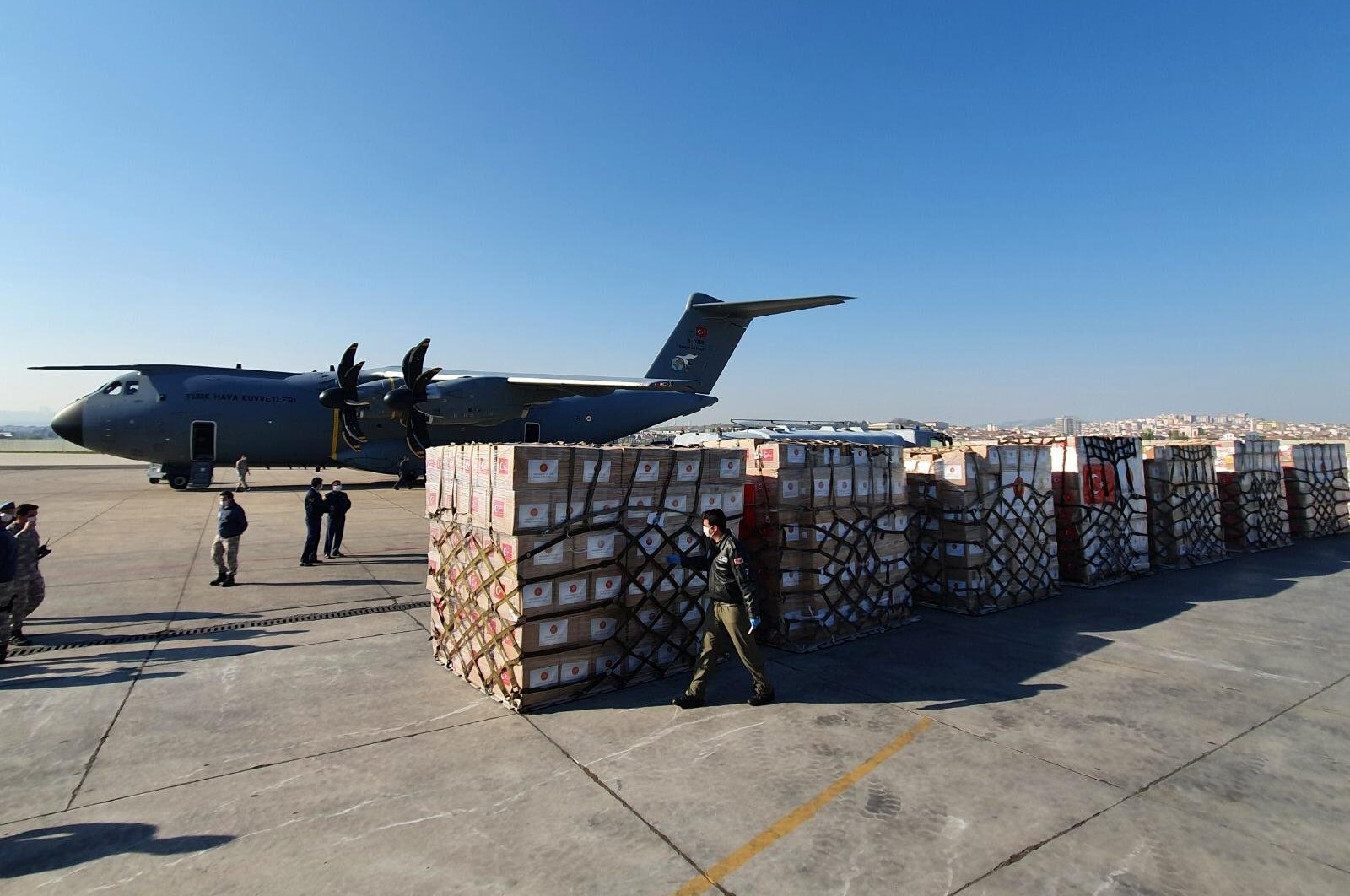 A Turkish military cargo plane and a shipment of medical supplies, part of a major aid campaign by Turkey which has dispatched supplies to dozens of countries since the coronavirus pandemic erupted, are seen at Etimesgut airport before departing for the United States, Ankara, April 28, 2020. (REUTERS Photo)
by DAILY SABAH WITH AA May 15, 2020 11:25 am

Showing strong solidarity with global actors in the common fight against the COVID-19 pandemic, Turkey has sent medical aid to 80 countries so far

Turkey has sent medical aid to 80 countries as part of its contribution to the global solidarity efforts against the coronavirus pandemic, Vice President, Fuat Oktay, said Thursday.

"We have had the opportunity to help 80 countries that have asked us for help so far," Oktay said in an online interview.

The main demand from these countries was for face masks, gloves and respirators, Oktay said.

He said two-thirds of the countries in the world, or close to 70%, had requested assistance from Turkey.

Most recently, a second batch of Turkish medical equipment arrived in Libya to help the country fight the coronavirus.

According to diplomatic sources, Turkey's Ambassador to Tripoli Serhat Aksen personally delivered the medical supplies to Tawfik Harisha, the country's Government Emergency Administration of the Ministry of Health director.

Emphasizing that they were grateful for Turkey's help, Harisha thanked Ankara for its support in every field.

Turkey had sent its first aid shipment to the war-torn North African country on April 11 to curb the spread of the virus.

Ankara also made its second delivery containing medical aid to Tunisia, which left for Tunis on May 8. The shipment included surgical masks, overalls, disinfectants, goggles, face masks and face shields.

Kerem Alp, Turkey's ambassador to Uganda, handed over the bicycles on Thursday to the task force, a committee led by the prime minister to mobilize relief and pool resources to combat COVID-19 in the country.

Alp said his country heeded the Ugandan president's call to support the health care sector in its challenges to respond effectively to the pandemic.

The bicycles will ease transport for health care workers in the districts of Sembabule and Kitgum, where most of the frontline health workers lack transport to hospitals. According to Alp, bicycles are designed to cater to both male and female users.

Ruhakana Rugunda, the prime minister, thanked the Turkish people for responding to Museveni's call to support the campaign against COVID-19.

Uganda currently has 160 confirmed cases, with 63 recoveries and zero deaths.

The NATO Allied Command also on Friday released a Twitter message thanking the Turkish Defense Ministry’s donation of protective supplies against the pandemic and added: “The gesture is a message of support to NATO readiness by helping build a deployable stockpile for our headquarters to perform its mission.”

After originating in China last December, COVID-19 has spread to at least 188 countries and regions. Europe and the U.S. are currently the worst-hit areas.

The pandemic has killed more than 300,000 people worldwide with over 4.4 million confirmed cases, while recoveries have surpassed 1.5 million, according to figures compiled by the Johns Hopkins University of the U.S.

Turkey currently has 144,749 confirmed coronavirus cases, and the death toll stands at 4,007.

Speaking in a video conference organized by the Foreign Economic Relations Board of Turkey (DEIK), Foreign Minister Mevlüt Çavuşoğlu said Thursday that strong solidarity with other countries during the coronavirus pandemic consolidated the perception of a strong and reliable Turkey.

He told DEIK members that Ankara now had greater expectations for progress on various issues with the EU including an update of the country's customs union, as well as visa liberalization.

He underlined that both he and President Recep Tayyip Erdoğan had personally discussed this with their European counterparts.

Referring to the medical aid Turkey provided to foreign countries, Çavuşoğlu said: "It was the first time that such positive news appeared in the press about our country."

"We aren't saying that everything has been solved with all this, but we can say that there is a positive atmosphere," he added.