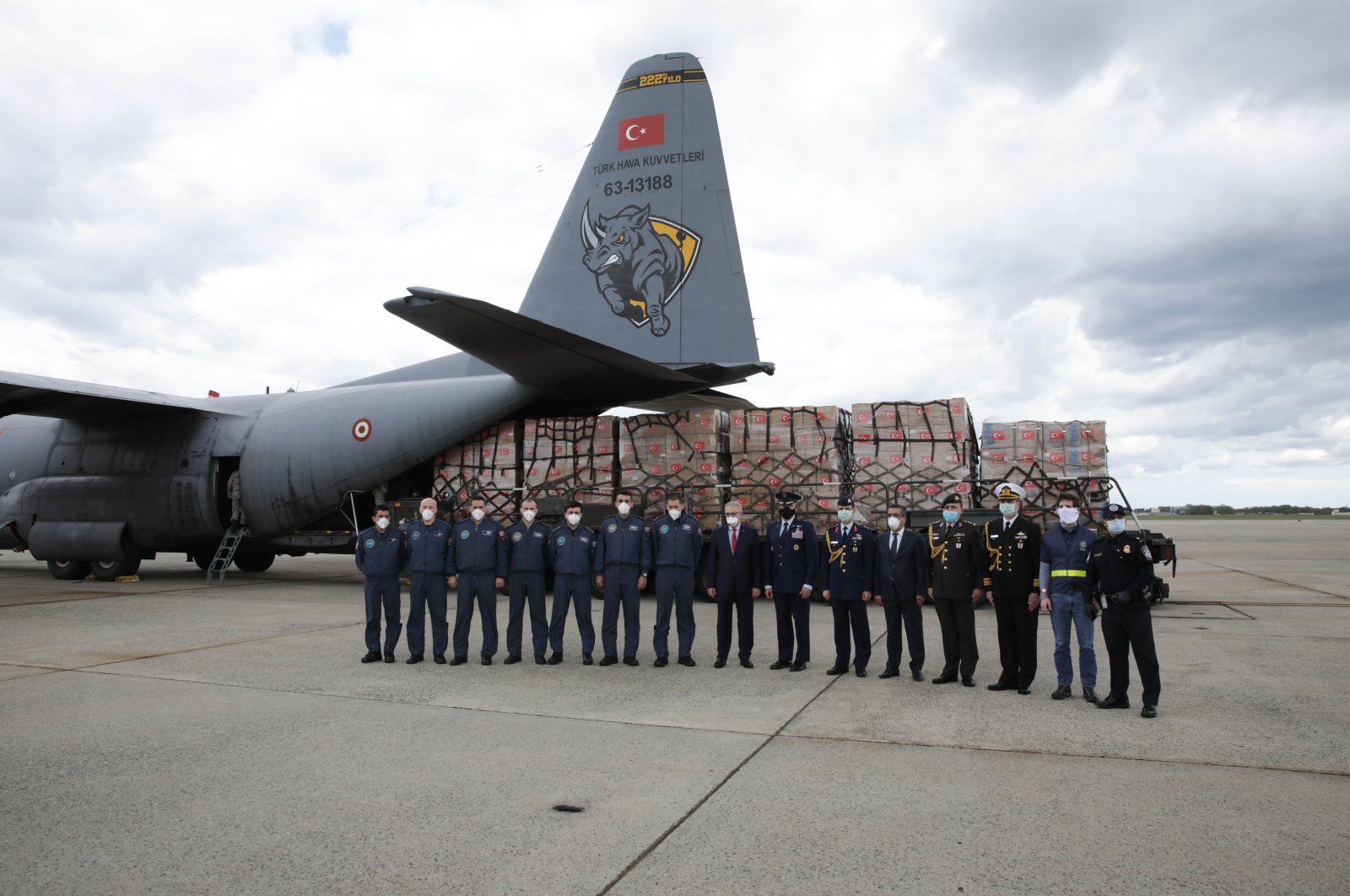 A Turkish military cargo plane with medical supplies and protective equipment to combat COVID-19 in the US unloads at Andrews Air Force Base, in Maryland, April 28, 2020. (AFP)
by DAILY SABAH WITH AA May 06, 2020 11:26 am
RECOMMENDED

Some two-thirds of the world have requested medical supplies from Turkey to fight the coronavirus, and nearly half of these requests were met, said Turkey's foreign minister on Wednesday.

A total of 128 countries have requested medical supplies from Turkey in the form of grants, export permits, or purchases, Foreign Minister Mevlüt Çavuşoğlu said in a televised interview.

Underlining that nearly 64 countries have received medical supplies from Turkey, Çavuşoğlu said he recently spoke to Health Minister Fahrettin Koca on how to meet Paraguay's request for medical supplies.

The huge number of medical supply requests from around the world "shows that Turkey is a reliable source and a true friend," Çavuşoğlu added.

Turkey's aid packages mostly include medical masks, protective overalls and gloves as well as disinfectants. All equipment was produced at military-owned factories and at sewing workshops that produce military uniforms and other clothing for the army.

Pointing to Turkey's strong health care system, Çavuşoğlu said the country is sharing its experience in dealing with the pandemic with the rest of the world.

"In this respect, the World Health Organization (WHO), the international community and other countries including the U.S. are pointing to Turkey as a model country," Çavuşoğlu said, adding that the medical aid it delivers will brand Turkey as a reliable source.

He further stressed that now is not the time to criticize the WHO or similar organizations as the coronavirus pandemic continues to impact thousands of people across the world every day.

"This isn't the time to criticize international organizations, especially the WHO. We should make maximum use of these institutions and support them," Çavuşoğlu said.

After originating in China last December, COVID-19 has spread to at least 187 countries and regions. Europe and the United States are currently the worst-hit regions.

The pandemic has killed around 257,000 worldwide, with total infections over 3.66 million, while over 1.2 million patients have recovered, according to figures compiled by the U.S.' Johns Hopkins University.

Turkey has a long tradition of sending humanitarian aid to countries facing difficulties, even for those it has tense diplomatic relations with. For instance, back in 1938, only a decade after the country’s foundation following a bloody war, Turkey sent medicine to China amid the outbreak of cholera in the Far East. Similarly, in 1941, Turkey sent medicine to the Greek army upon demand from Greece, a country that fought against Turkey during the liberation war. Similar aid has been provided to many other countries over the years, including Ethiopia, Bangladesh and Afghanistan.