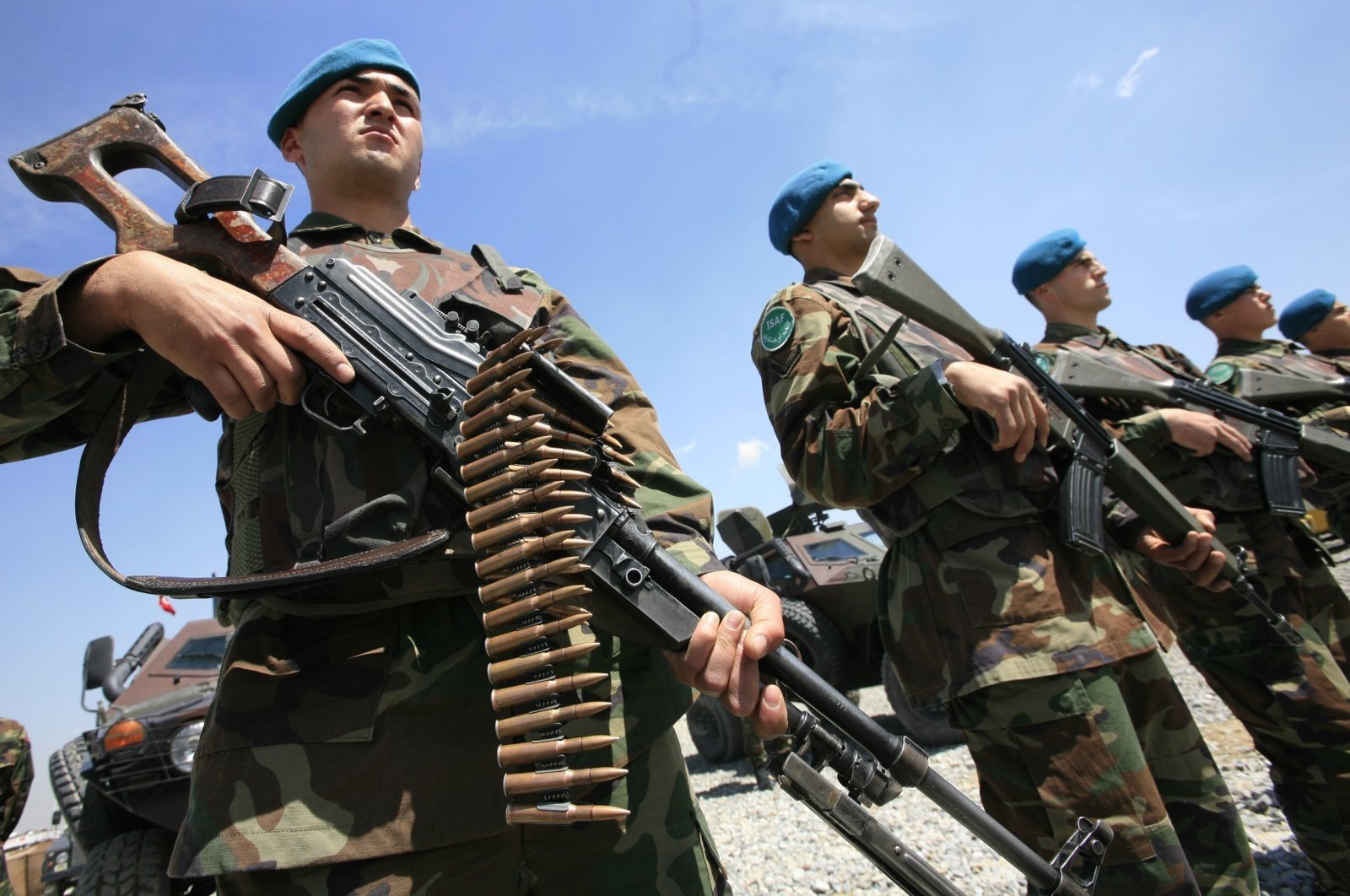 Turkey aims to evacuate its military staff from Afghanistan as soon as possible, Defense Minister Hulusi Akar said Thursday, noting that the Turkish troops are trying their best to implement evacuation plans at Kabul Hamid Karzai International Airport despite extraordinary conditions and congestion.

Stating that Turkey aims to ensure the operation goes ahead smoothly, Akar said: “We would like to thank our friendly and brotherly allies Pakistan and Tajikistan for their contribution to our activities and cooperation in the region."

The defense minister noted that the evacuation is taking place in coordination with the Ministry of Foreign Affairs and relevant institutions.

Communications Director Fahrettin Altun also touched on the situation in Afghanistan saying that Turkey has long supported the Afghan people's struggle to rebuild their country and will continue to do so.

"Turkey has been committed to peace and stability in Afghanistan, as the Turkish military served in this country since 2002 under multilateral as well as bilateral agreements. We have supported the Afghan people in their struggle to rebuild their country and will continue to do so," Altun said on Twitter.

Noting that over the past 20 years Turkish forces in Afghanistan have provided security to the Afghan people and contributed to stability in the country, he stated that during the period Turkish soldiers gained the Afghan people's trust and affection.

On the situation at the Kabul airport, he stressed that the "rapidly deteriorating security" there shows the need to reassess the situation on the ground.

"Given the most recent developments and through consultations with its partners, Turkey made the decision to evacuate Turkish military forces and assets from the airport at this time," Altun noted.

The Defense Ministry announced that Turkey had begun evacuating its armed forces from Afghanistan after evaluating the current situation and conditions, in a statement late Wednesday, referring to the Taliban's takeover of the war-ridden country. However, Turkish experts could remain in the country to provide technical support to the Taliban in operating Kabul airport, officials said.

"Turkish Armed Forces returning to their homeland with pride of successfully fulfilling task entrusted to them," it ministry added.

Since 2002, the Turkish Armed Forces (TSK) have operated in Afghanistan under the U.N., NATO, and bilateral agreements to contribute to the peace, welfare and stability of the Afghan people, the statement said.

It added that the Turkish troops intervened alongside soldiers from other countries during the chaos and ensured the security of Kabul Hamid Karzai International Airport.

As many as 1,129 civilian Turkish citizens were evacuated via military aircraft during the process, the statement noted.

It had been negotiating with both the Taliban and Washington about playing a role in protecting the airport after the U.S. troop withdrawal, which is scheduled to be completed soon.

But the Taliban's swift capture of the Afghan capital left Ankara's plans in disarray.

“Withdrawal from Afghanistan could be completed in 36 hours,” Presidential Spokesperson Ibrahim Kalın also said during a televised interview later in the day.

“Our troops completed their duty successfully,” he added.

"After our troops withdraw, we could continue this operational task at the airport there. If it is agreed in the terms and an agreement is reached in this direction, we will continue to provide this service there," said Kalın.

Speaking to broadcaster NTV, Kalın said he doubted the Taliban have the capacity to secure the airport.

He underlined that Turkey's civil diplomatic mission is continuing its duties in Afghanistan, although some employees have been evacuated.

"Our ambassador is there, our embassy employees are there. We evacuated some of them, but the main staff is there, and they continue their work," he said.

U.S. Secretary of State Antony Blinken said regional countries were making "very active efforts" to see whether they can help keep the airport open once the U.S. military leaves.

"The Taliban have made clear that they have a strong interest in having a functioning airport," Blinken said.

Meanwhile, the Pentagon on the same day said that the running of Kabul airport will no longer be the U.S.' responsibility after the complete withdrawal of American forces.

Spokesperson John Kirby said the Taliban "will have to manage" the airport's operations "on their own, and I assume with the international community," adding "that won't be an American responsibility."

Kirby said Turkish troops remain on the ground at the airport "assisting in this security mission that we have there," but said he would not "speak for their intentions one way or another going forward."

Turkey has praised what it described as moderate statements by the Taliban since they captured Kabul on Aug. 15 and has said it is open to engaging with them once a new, inclusive government is formed. Speaking on relations with the Taliban, Kalın said the "steps to be taken in the field" would determine the main agenda for relations between the two sides.

At this point, he said, the "most important step" is the establishment of an "encompassing, embracing and inclusive government" in the war-torn country.

However, the Taliban said that the group would secure the airport itself.

On the other side, the Taliban have asked all countries, primarily Turkey, to help the Afghan people and Afghanistan, the spokesperson of the Taliban's political office in Qatar, Mohammad Naeem Wardak said Wednesday.

"We ask all countries of the world, especially Turkey, to help our people and our country," he said.

Regarding Kabul airport, Wardak also said: "The airport is Afghan territory and Afghans are responsible for their land, institutions and honor. This is a matter of sovereignty. Aid is another (thing), but the administration of the country is our duty and we are able to do it. Why are they afraid now? You saw, foreign forces were at the airport, what they did, people rained from planes. But now we have made the airport perimeter safe. This is our country, our home. We know the ins and outs of our home and what is in our favor. No country in the world accepts the security of its own airport by someone else. We also ask everyone to respect the rules and sovereignty of visiting the country."

The Taliban recently declared the war in Afghanistan over after taking control of the presidential palace in Kabul, while Western nations scrambled Monday to evacuate their citizens amid chaos at Kabul airport as frantic Afghans searched for a way out.

President Recep Tayyip Erdoğan said Wednesday that Ankara is approaching the messages from Taliban leaders with cautious optimism and the group's actions, not words will determine the future course of action in Afghanistan.

Addressing ambassadors at a ceremony marking the 950th anniversary of the Battle of Malazgirt, which marks the beginning of the first Turkish settlements in Anatolia, Erdoğan underlined the importance of attaining stability in Afghanistan. He added that Ankara continues to be in "close dialogue” with all parties in the country with this purpose.

He also stressed the importance of forming an all-inclusive government in Afghanistan and said the priority in the war-torn country should be to fill the authority gap to ensure public safety and normalization.

Touching on the urgent needs of Afghans, including food, the Turkish president said that the coronavirus pandemic, drought, and financial problems took a heavy toll on the public.

"The international community must help Afghanistan in this tough time and show solidarity, regardless of who governs the country,” he stated.

Turkish troops and diplomats have been making extraordinary efforts to ensure order at the airport and maintain evacuation operations, he said.