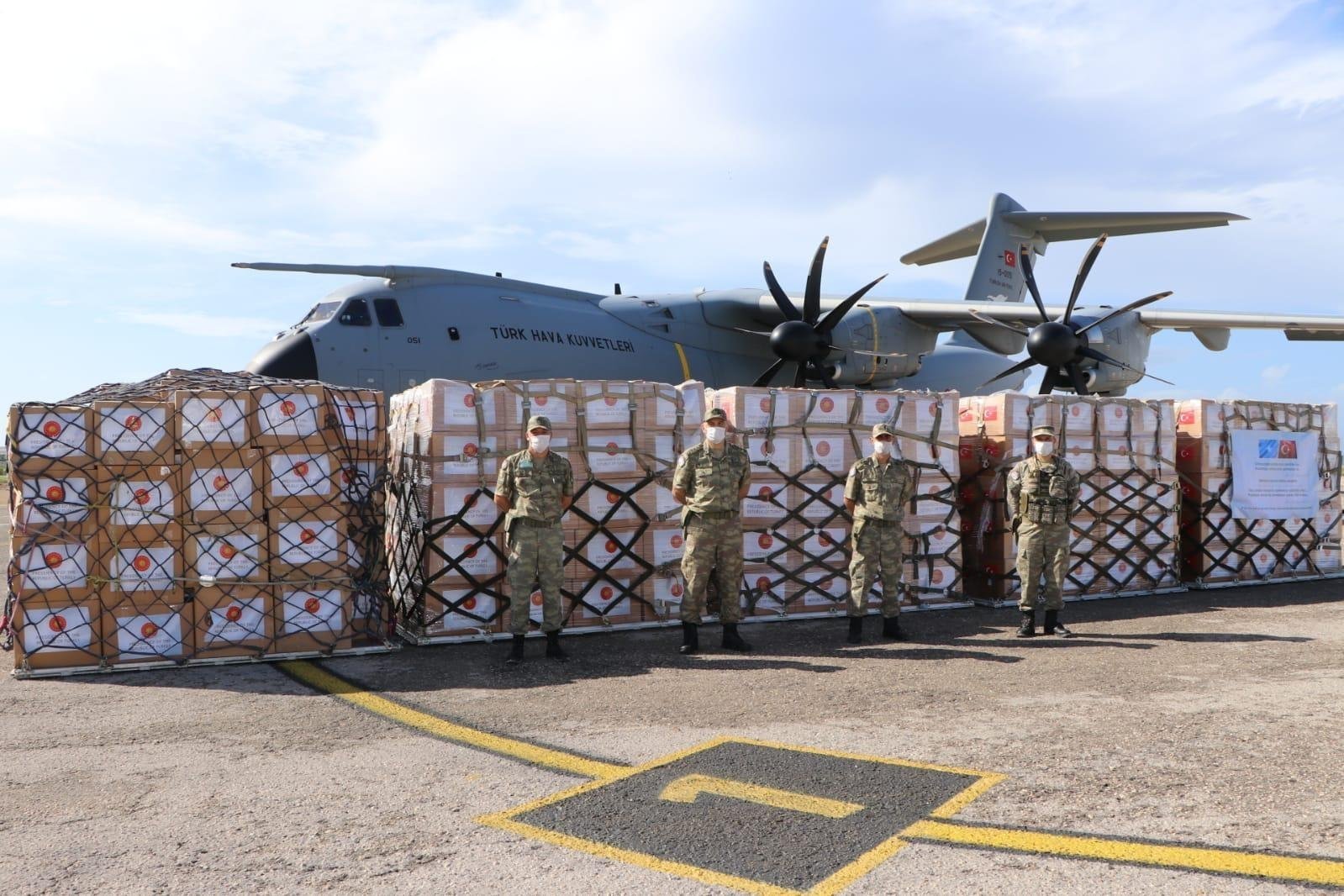 Turkish soldiers stand in front of a donation of medical supplies from Turkey to Somalia in the capital Mogadishu, Somalia, May 2, 2020. (AA Photo)
by DAILY SABAH WITH AA Dec 30, 2020 11:52 am
RECOMMENDED

Turkey has helped its African partners to better combat the coronavirus since the early days of the pandemic, whether supplying ventilators to Somalia, sending fabric and sewing machines for mask-making to Mozambique and Eswatini, or solving transportation problems for Ugandan health workers in remote areas.

Despite battling the COVID-19 outbreak at home, Turkey did not forget its partners and sent fleets of planes carrying medical supplies, masks, respirators and more across the African continent to stem the spread of the virus, according to Anadolu Agency (AA).

In April, a military plane carrying medical supplies took off to help South Africa, which was emerging as the worst-hit country on the continent.

"This is a gesture of the Turkish government to South Africa," Turkish Ambassador Elif Çomoğlu Ülgen said when the supplies landed at Cape Town International Airport.

TIKA also provided protective gear to Lesotho, a landlocked country encircled by South Africa. The items included sanitizers, gloves and masks, and were handed over to the country's disaster management team which later distributed the supplies to three hospitals and 20 clinics in the poorest and most remote parts of the country.

Turkey also dispatched a shipment of medical supplies, including new Turkish-made ventilators, to Somalia to help the Horn of Africa country combat the COVID-19 outbreak.

Turkish Ambassador to Botswana Meltem Büyükkarakaş said that TIKA donated 27 tons worth of food to 1,000 families in Botswana to help them deal with difficulties posed by the COVID-19 pandemic. The donation was delivered to the vice president of Botswana, Slumber Tsogwane, in May 2020, as Turkey's contribution to Botswana's COVID-19 Relief Fund.

In Mozambique, Ambassador Zeynep Kızıltan said TIKA donated sewing machines and traditional fabrics for the production of 26,000 masks in a vocational training center and also renovated two workshops in collaboration with the municipality of Maputo in the country's capital. Turkey also distributed food parcels to hundreds of vulnerable families affected by COVID-19 during Ramadan.

In June, Ankara, donated 50,000 masks to Rwanda, while a private company in Turkey sent another 40,000 masks to help the East African nation tackle the virus outbreak, according to Burcu Çevik, Turkey's ambassador to Rwanda.

For decades, Turkey had a one-dimensional foreign policy that was shaped by its relations with the West but now the country has changed course, adopting its most diverse, multidimensional and independent foreign policy since the end of the Cold War.

Turkey's engagement with Africa dates back to the adoption of an action plan in 1998, but relations really took shape in 2005 which Ankara declared the "Year of Africa." Turkey was accorded observer status by the African Union (AU) the same year. In a reciprocal move, the AU declared Turkey its strategic partner in 2008, with relations between the continent and Turkey gaining momentum when the first Turkey-Africa Cooperation Summit was held in the commercial capital Istanbul with the participation of representatives from 50 African countries that year.

In 2009, there were only 12 Turkish embassies in Africa, of which five were in North Africa. Now, there are 42. Turkish Airlines flies to 60 different destinations in 39 countries on the continent, while TIKA has nearly 30 coordination centers and the Foreign Economic Relations Board (DEIK) has joint business councils with more than half of the African countries.