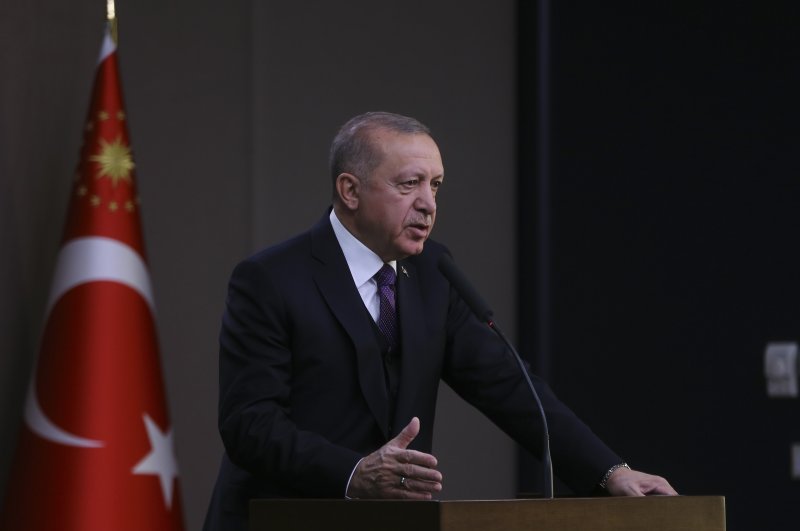 President Recep Tayyip Erdoğan speaks to reporters at Esenboğa Airport ahead of his departure for an official trip to Azerbaijan, Feb. 25, 2020 (AA Photo)
by DAILY SABAH Feb 25, 2020 11:01 am

President Erdoğan criticized Russia for offering continuous support to the Assad regime, which is further deteriorating the humanitarian situation in Idlib, as he reiterated Turkey's determination to continue to hold talks to resolve the issue

President Recep Tayyip Erdoğan has expressed concern about Russian support for the Bashar Assad regime as the ongoing humanitarian crisis in Syria deepens, noting that Turkey has evidence proving Russia's military support. He also noted that Turkish officials were in constant communication with their Russian counterparts regarding ongoing developments in Syria's Idlib province and Libya and that he planned to have a face-to-face meeting with the Russian premiere to finalize the details of a road map aimed at de-escalating violence in the regions.

Speaking to reporters ahead of his departure for an official visit to Azerbaijan Tuesday, Erdoğan said solving the Idlib crisis was a priority for Turkey as the region is experiencing a humanitarian catastrophe.

“We continue to hold senior-level talks with Mr. Putin to evaluate our road map,” Erdoğan said, criticizing Moscow for providing vital assistance to the brutal Assad regime, including air support.

"Russia gives maximum backing to the Assad regime, including air support," the president said, adding that Turkey had sufficient evidence proving Russia's support to the regime forces, despite denials of offering assistance.

Highlighting the fact that Turkey shares a 911-kilometer border with Syria, Erdoğan said the country had to find a solution.

“We are doomed to be, rather than obliged to be, part of this conflict,” Erdoğan said, adding that Turkey has grown tired of the crisis near its border.

Some 1 million Idlib refugees have moved toward the Turkish border in recent months, fleeing attacks by the Assad regime and its allies, which have caused a desperate humanitarian situation this winter.

The president continued by noting that he and other Turkish officials have conveyed Ankara’s concerns to Moscow and will continue to do so.

Erdoğan noted that a Russian delegation would arrive in Turkey on Wednesday to discuss the situation in Idlib while highlighting that he would perhaps meet with Russian President Vladimir Putin on March 5 in Istanbul or Ankara.

"There is no agreement on holding a four-way summit," Erdoğan said, in reference to a meeting with French, German and Russian leaders.

Turkish and Russian officials held two rounds of talks without reaching a concrete solution, as Turkish officials said they were unsatisfied with a Russian proposal for northwest Syria's Idlib. The talks were prompted by a recent escalation in Idlib in which Assad forces killed 13 Turkish soldiers.

Ankara has condemned Russia's policy of seeking to take over the territory with little care for the fate of its people, noting that the country was determined to not step back from the Sochi agreement and plans to take all necessary steps to end regime aggression.

Turkish officials have also highlighted that Ankara is not looking to gain territory but is, in fact, seeking an end to the humanitarian crisis and displacement of refugees, and would make no concessions on its observation points.

The Russia-backed Assad regime has been on the offensive since December to capture and reopen the M5 highway, held by the opposition since 2012, despite a cease-fire deal brokered late last year between Russia and Turkey. Turkish officials have been urging Russia to stop providing support to the Assad regime, which has been carrying out a deadly assault in the northwestern region. Erdoğan has underlined that Turkey has no more patience regarding Assad’s flagrant human rights violations throughout Syria, including using terrorist groups as an excuse to carry out a campaign of ethnic cleansing.

Regime forces captured the key town of Maaret al-Numan from the opposition last Wednesday and have since set their sights on the town of Saraqib. The strategic highway passes through the cities.

The September 2018 Sochi agreement signed with Russia prohibited acts of aggression in Idlib. The Syrian regime and its allies, however, have consistently broken the terms of the 2018 cease-fire and the new one that started Jan. 12, launching frequent attacks inside the safe zone in the northwestern province. More than 1,800 civilians have been killed in attacks by the regime and Russian forces since then.

The president noted that Libya is also another issue they would discuss, as the forces of putschist Gen. Khalifa Haftar were financially supported by the Abu Dhabi administration through the Russian-based Wagner mercenary group.

He also announced that two Turkish soldiers had been killed in Libya.

Since the ouster of late ruler Moammar Gadhafi in 2011, two seats of power have emerged in Libya: one in eastern Libya supported mainly by Egypt and the United Arab Emirates and the other in Tripoli, which enjoys U.N. and international recognition. Haftar's eastern-based forces aim to capture the capital, Tripoli, through the backing of Egypt, the UAE, Russian mercenaries and some African troops. Turkey, meanwhile, backs Fayez al-Sarraj's internationally recognized Government of National Accord (GNA).