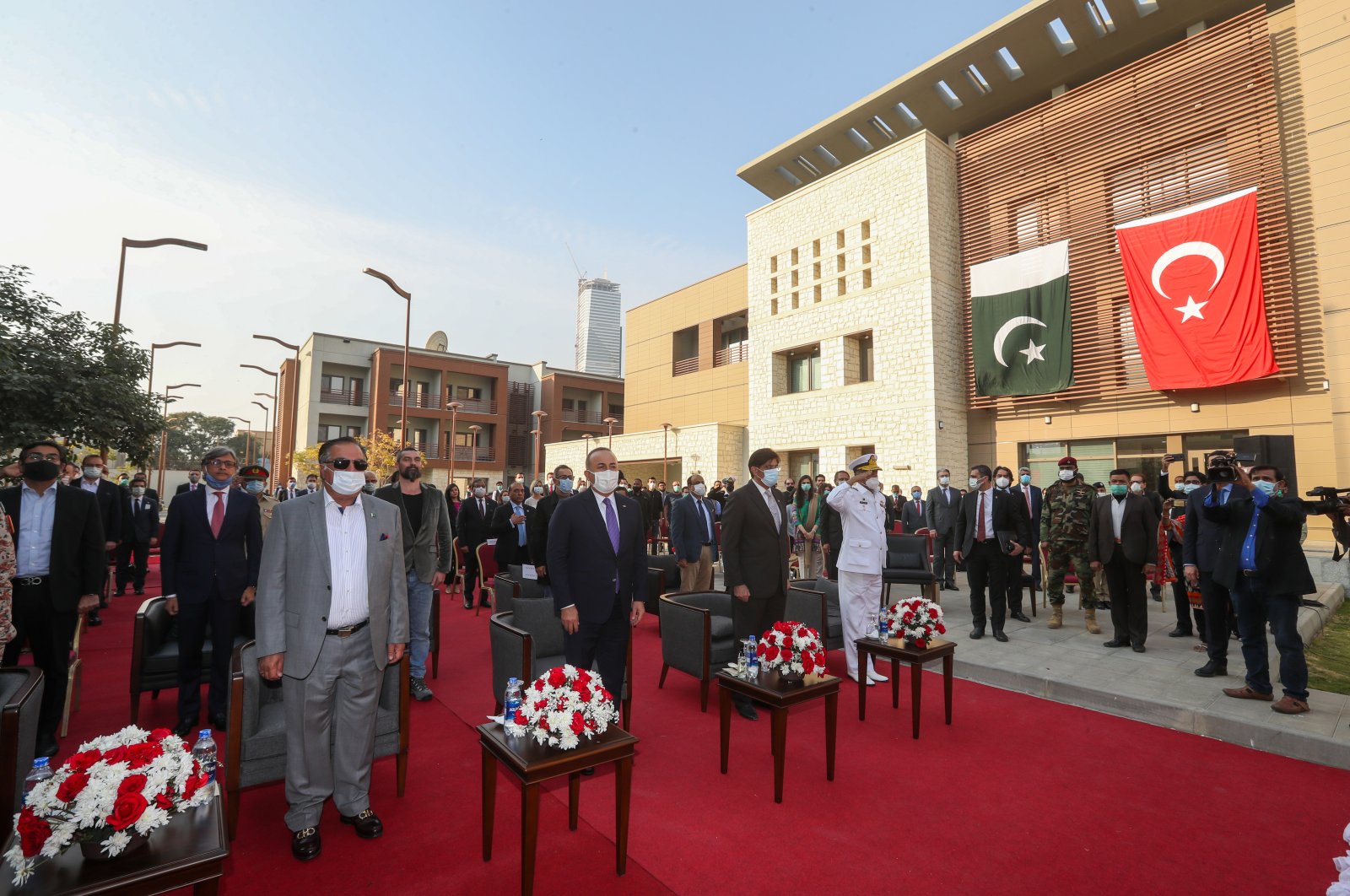 Addressing the inauguration ceremony, Çavuşoğlu said the new building is a symbol of Turkey-Pakistan friendship, which will be further strengthened in the days to come.

Appreciating the work of Turkish and Pakistani architects, contractors and workers who took part in the construction of the new building, he said the Turkish Consulate in Karachi will continue to play its role in enhancing the commercial value of the port city.

A mixture of Turkish and Pakistani architecture, the construction of the building began in 2017.

Çavuşoğlu also said the 22-story Turkish Consulate building in New York, which is currently under construction, will become operational by the end of this year.

Mentioning President Recep Tayyip Erdoğan's vision for development, he said it aims to work for the development and prosperity not only of Turkey but also its friendly countries.

Turkey's Ambassador to Pakistan Ihsan Mustafa Yurdakul and Consul General in Karachi Tolga Uçak were also in attendance at the ceremony.

Çavuşoğlu, who is on a two-day visit to Pakistan, also visited the mausoleum of Mohammad Ali Jinnah, the founder of the South Asian Muslim state, and laid a floral wreath on his grave.

"I commemorate with respect and mercy Quaid-i-Azam Muhammed Ali Jinnah, one of the chief architects of Turkey-Pakistan friendship," Çavuşoğlu said in a tweet.

Çavuşoğlu said the Turkish people have a special place in the hearts of Pakistani people as Ankara and Islamabad have always stood together in challenging times.

The two nations, he added, will continue to cooperate on all regional and international issues.

Ismail, for his part, thanked Ankara for its longstanding support for Islamabad on Kashmir issues, as well as the ongoing cooperation for the development of health, education, housing, culture and other sectors in Pakistan.

Çavuşoğlu's visit was welcomed by many Pakistani officials as it is seen as a reflection of the two countries' strong bilateral ties.

"Our relationship is unique and enviable, not only here in Pakistan and Turkey, but all across the world they look at us like that," said the chief of the air staff of the Pakistan Air Force, Chief Marshal Mujahid Anwar Khan.

Noting that he sees Turkey as a second home, Khan said: "In my candid opinion, we are two countries, one nation."

Khan emphasized that the two countries do things in unison in all spheres of life from political leadership to military and people to people contact, and added that deep-rooted bilateral relations have improved to date.

Apart from sharing common culture and faith, the brotherly countries of Pakistan and Turkey also have commonalities in challenges they face in their regions and interests, he added.

"These values, these relationships were instilled in us," Khan said, adding that both nations must augment the relationship further, as well as handing it down to our future generations.

Emphasizing Islamabad's support for Ankara on Cyprus and other regional issues, Khan said his country stands by Turkey in its fight against terrorism.

Recognizing the security challenges Turkey faces on its borders, he said: "We know Daesh and the PKK. They are a clear and present danger."

"We need to have mutual collaboration and cooperation to overcome these challenges," he said, adding that Pakistan also has similar challenges on its borders.

Khan said that Pakistan and Turkey also have a common vision, which is to maintain regional stability, peace and prosperity. He said this vision manifests itself with Turkey's support to Azerbaijan in its fight to liberate its lands from Armenia's nearly three-decades-long occupation.

"I appreciate the ever-increasing relationship between Pakistan and the Turkish defense industry," Khan said on two countries' cooperation in the field.

Touching on Turkey's role in Azerbaijan's victory over the Armenian Army, he said the country's armed drones were the key to the liberation of the lands.

"I think it was one of the catalysts, UAVs (unmanned aerial vehicle) played a role in securing the liberation of the occupied territories."

Khan noted that likewise, Pakistan also achieved significant progress in the defense industry and added that the two countries should continue cooperation in the field.

"We need to further strengthen our defense cooperation," he said, adding that both countries could learn from each other.

He said the military cooperation should be built on economic cooperation, and added that joint projects, exercises, production, training and technology sharing are leading areas of cooperation between the two countries.