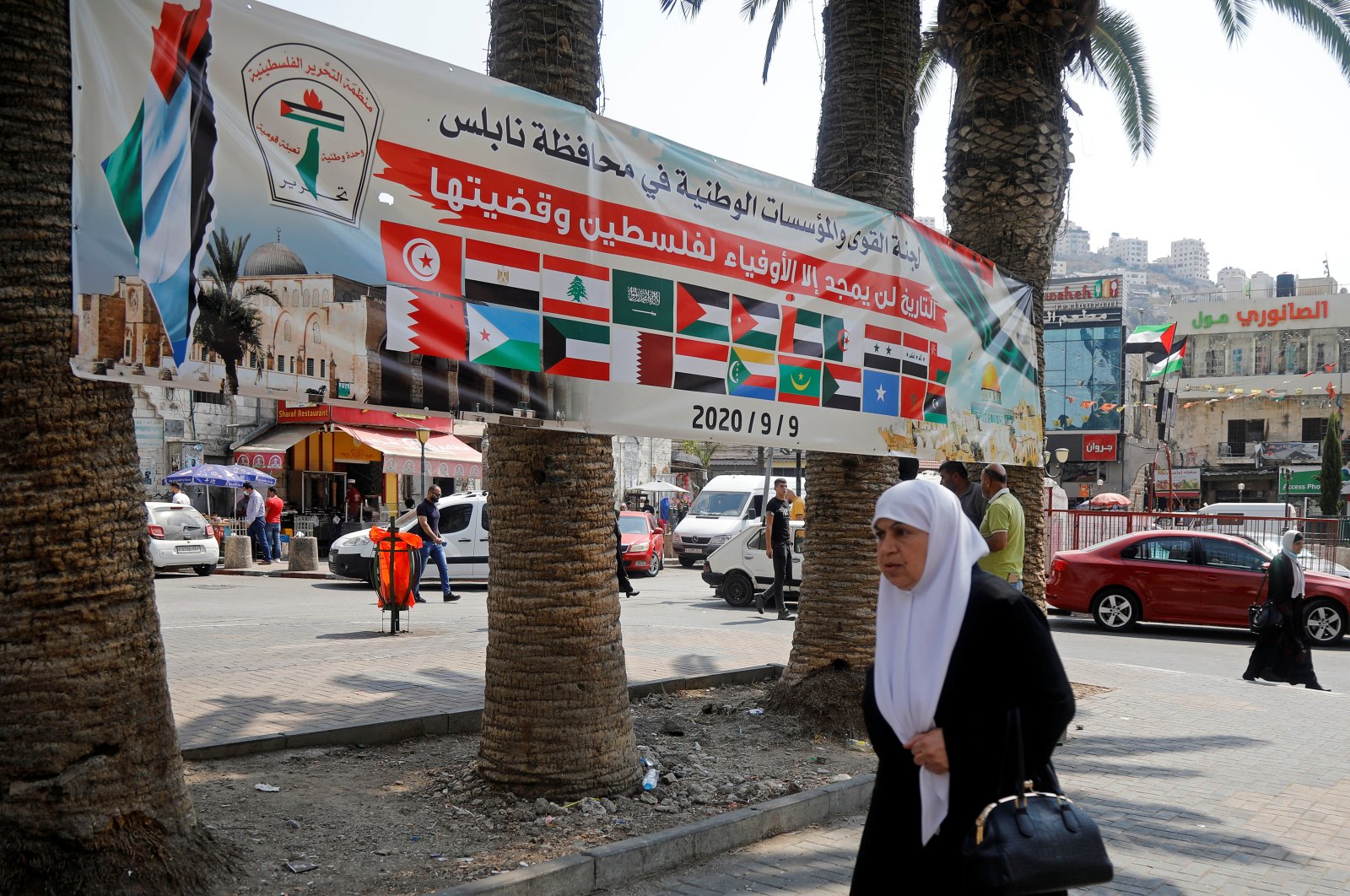 A woman walks past a banner showing Arab countries' flags during a protest against normalizing ties with Israel, in Nablus, in the Israeli-occupied West Bank, Sept. 9, 2020. (Reuters Photo)
by DAILY SABAH Sep 10, 2020 11:31 am
Edited By Dilara Aslan
RECOMMENDED

We invite the Arab League once again to play a positive role in providing stability and security in the region instead of acting at the guidance of some members that adopt a hostile stance toward Ankara, the Turkish Foreign Ministry stated Thursday.

The ministry condemned the Arab League’s decisions against Turkey made on Sept. 9 and stated that the League pursues these “baseless accusations” in order to cover its own destructive agenda and activities.

Stating that these decisions need not be taken seriously, the ministry added that it is known that Turkey attached great importance to the territorial and political integrity of Arab states as well as to the region’s stability and acted to preserve these contrary to some regimes that are behind these decisions.

“Despite all the efforts of certain regimes that try to divide Syria and support terrorists that harm the sovereignty of Iraq, that are the cause of Yemen’s disorder, that stand by putschists in Libya, that risk the reestablishment of stability in Sudan for their own interests, that back regimes, militia leaders, separatist groups and terrorist organizations that cause humanitarian dramas, Turkey will continue its constructive stance decisively for the stability and peace of the region,” the ministry continued.

“It is followed by the Arab people how these regimes ignore the Palestinian cause and how they prevent the Arab League from adopting decisions on initiatives of a two-state solution in Palestine,” it said.

Egypt and the United Arab Emirates (UAE) have condemned Turkey’s activities in the region and accused Turkey of “interfering in Arab affairs,” while there was condemnation for last month’s normalization deal between Israel and the UAE.

Palestinians were dismayed by the UAE’s move, fearing it would weaken a long-standing pan-Arab position – known as the Arab Peace Initiative – that calls for Israeli withdrawal from occupied territory and acceptance of Palestinian statehood in return for normal relations with Arab countries.

"We have asked to have a clear condemnation of any breaking out of the Arab Peace Initiative, and we didn’t get it," said Palestinian Foreign Minister Riyad al-Maliki in comments published by the Palestine News and Information Agency (WAFA)