Turkey-Libya deals not to be affected by Sarraj's resignation, presidential spokesperson Kalın says 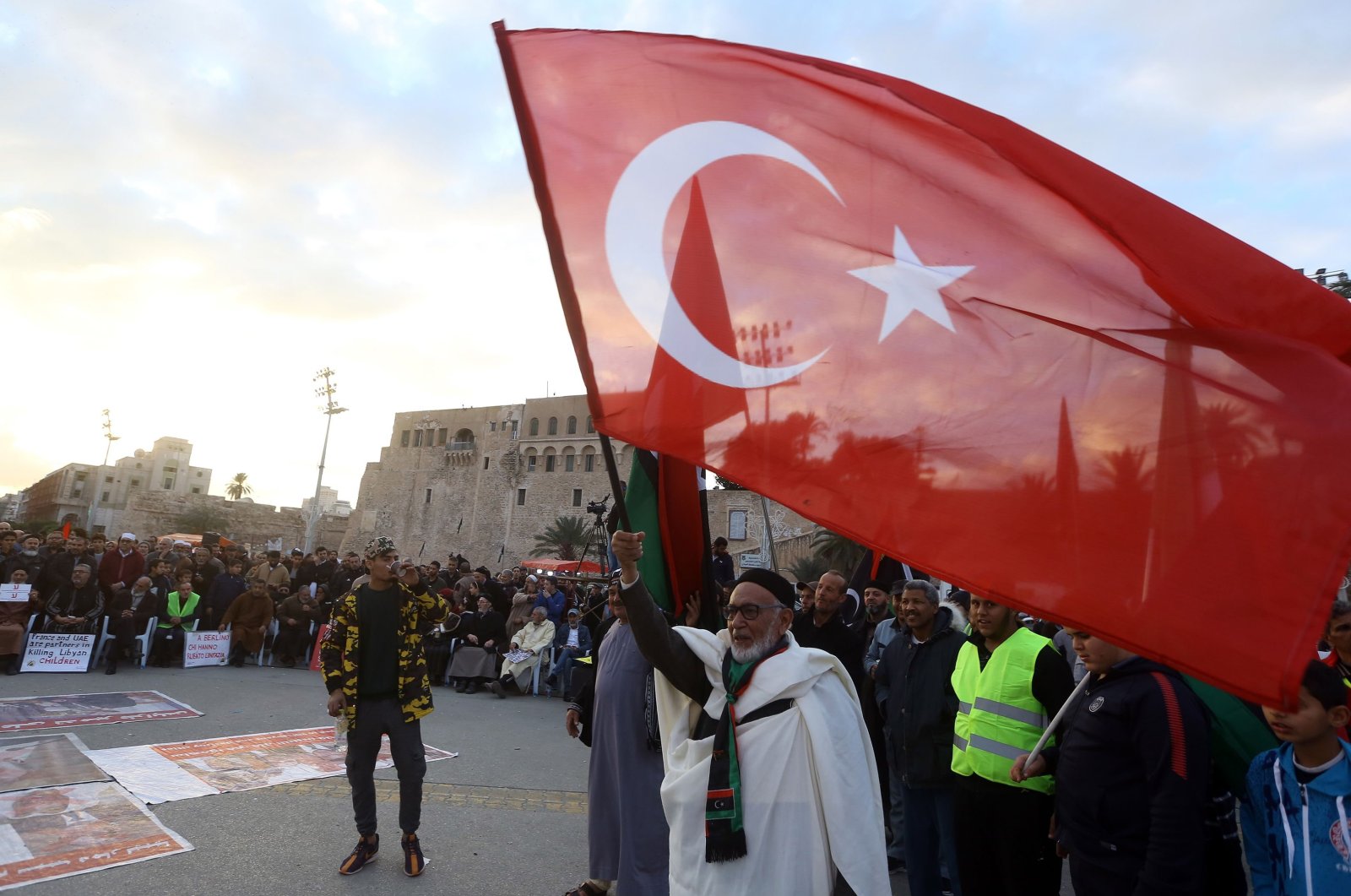 Demonstrators wave a large Turkish flag in a rally against putschist Gen. Khalifa Haftar and in support of the U.N.-recognised Government of National Accord (GNA) in Martyrs' Square in the GNA-held capital Tripoli, Jan. 10, 2020. (AFP Photo)
by Daily Sabah with DHA Sep 21, 2020 11:57 am
RECOMMENDED

“These agreements will not be affected by this political process because these are decisions taken by governments, not individuals,” Kalın said.

Sarraj, head of the internationally recognized Government of National Accord (GNA), announced last week his intention to step down by the end of October, saying he was willing to leave his post in favor of a new executive determined by peace talks in Morocco.

The delegations from the two rival sides in the Libyan conflict met for talks earlier this month after a surprise cease-fire in August and a pledge to hold national elections.

Speaking to Demirören News Agency (DHA), Kalın said that the GNA continues to be the legitimate government in Libya with the contributions of Turkey and has also increased the GNA's international recognition during the process.

“Therefore, we can say that the GNA is at a better institutional level, regardless of individuals (in specific roles),” he added.

Underlining that many political actors changed in Libya during the last 10 years, Kalın said: “Of course, individuals and names are important, too. In the final analysis, these negotiations and efforts are conducted through these actors. Our contact with other actors there also continues and will continue. As our president (Recep Tayyip Erdoğan) stated, our delegations may visit there. Our traffic with Libya will continue.”

"With these meetings, we hope this effort will go in the direction it should," he said.

Kalın also said that Libya’s security and stability are essential for that of North Africa and the Mediterranean region. Reminding that Turkey has been providing support to the country as part of the military cooperation deal signed last year with GNA, Kalın added this support will continue regardless of who fills specific roles in the internationally recognized government.

He also touched upon the concerns about the future of security and maritime deals signed with Libya in case of Sarraj’s resignation and said that these deals will not be affected.

“The decisions taken by the Presidential Council maintain their validity. Our representatives also continue their efforts there as part of the deal. If Mr. Sarraj quits his role, his working crew, representatives in the parliament, officials in ministries and other executives will maintain this traffic. They are very determined for the continuation of these efforts and cooperation.”

Turkey backs the GNA, providing military support following an April 2019 offensive on Tripoli by rival putschist Gen. Khalifa Haftar, and helped turn the tide in the conflict earlier this year.

GNA forces, boosted by Turkish drones and air defenses, made a string of gains against Haftar's forces in recent months. Haftar is supported by neighboring Egypt and the United Arab Emirates (UAE) as well as Russia.

Another statement on the two countries’ cooperation came from Tripoli. Libya and Turkey have started implementing a series of programs to reconstruct the military in the war-torn country, Defense Minister Salah Eddine al-Namrush said Sunday.

The first training was expected to be carried out west of the capital Tripoli, the minister said.

Back on Aug. 17, al-Namrush announced that they signed a deal with Turkish and Qatari defense ministers to provide assistance to restructure the military in the country.

The Turkish military will provide assistance to restructuring the Libyan Army into a regular army based on the model that was used in training the Azerbaijani army.

Turkish military advisers are expected to provide training and logistical assistance in cooperation with Qatar to reestablish a regular army in Libya.

In January, Turkey began deploying soldiers to Libya after Parliament approved a motion responding to Libya’s call for Turkish troops. Libya's GNA made a formal request for "air, ground and sea" support from the Turkish military to help fend off an offensive by forces loyal to Haftar, who was attempting to take control of the capital Tripoli.