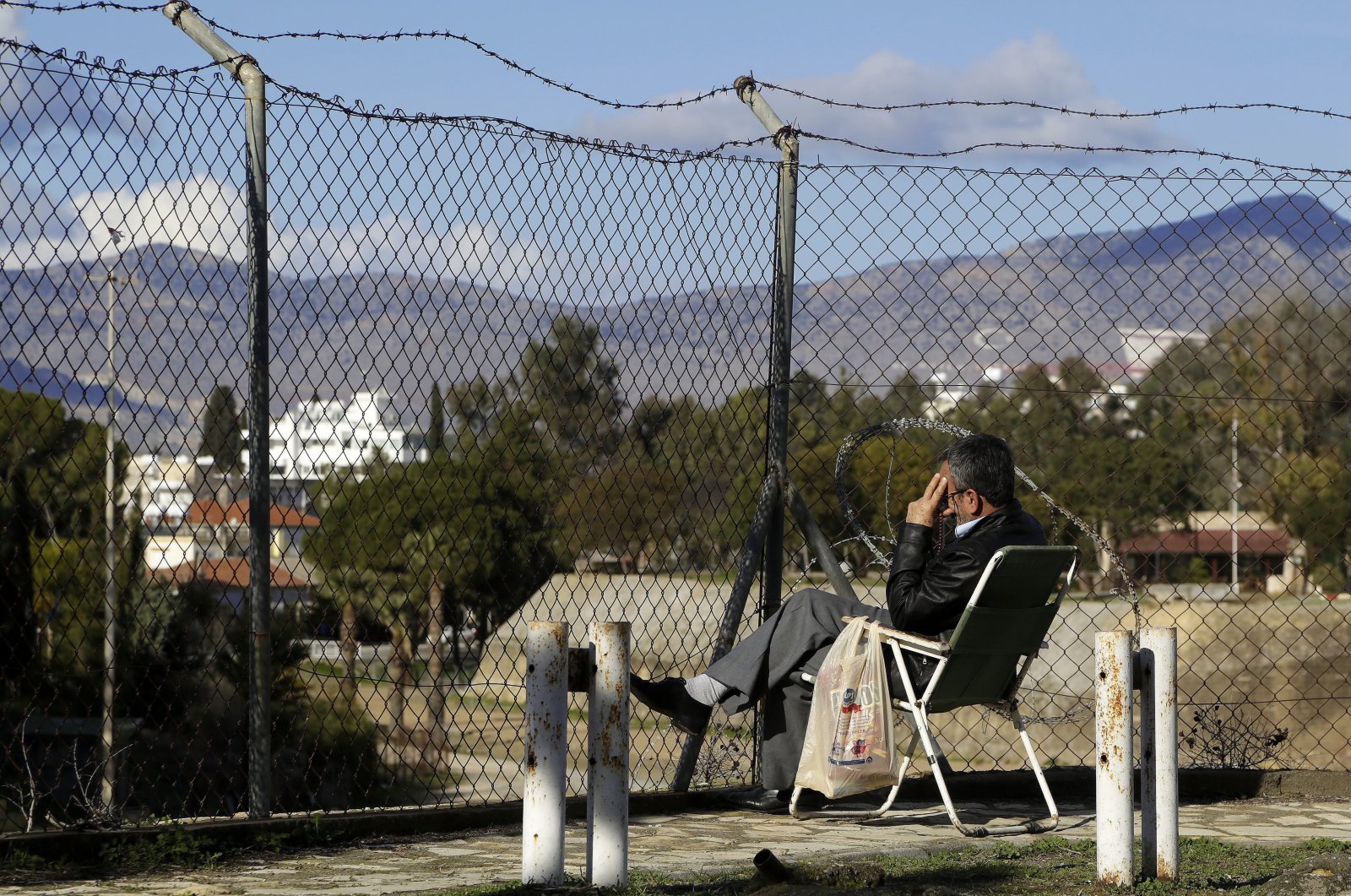 A man sits in front of the fence that divides the Greek and Turkish Cypriot areas on the Eastern Mediterranean island of Cyprus, Jan. 11, 2017. (AP Photo)
by DAILY SABAH Jun 22, 2020 12:08 pm
RECOMMENDED

Turkey is open to discussing its differences with Greece, and the two neighboring countries can resolve issues such as rights over natural resources in the Eastern Mediterranean and the split of the island of Cyprus within the context of the United Nations charter, Turkey's ambassador to Athens said Sunday.

Speaking to the Kathimerini daily in Greece, Burak Özügergin said that Turkey and Greece can resolve bilateral issues without the intervention of third parties.

Underlining that a new period to solve problems between two countries is possible, Özügergin said: “An opening is really possible but making a complaint to third parties does not lead us to the solution, at least in this situation. Also, creating pressure through other factors will not work.”

“The U.N. charter is here. It includes almost how all disparities can be resolved: negotiation, mediation, refereeing, fair agreement, etc. We are open to all these methods. Our focus point is that borders should be determined based on justice, equality and peace," he said.

Greece and Turkey are at odds over various decades-old issues ranging from mineral rights in the East Mediterranean to the ethnically split Cyprus.

Touching upon whether Turkish Petroleum will be granted a permit for new explorations in the Eastern Mediterranean, Özügergin said that Turkey is a country that always says what it does and does what it says.

Expressing Turkey’s dissatisfaction with regional actors’ unilateral actions in the Eastern Mediterranean, Özügergin said Ankara has constantly warned that Greece, the Greek Cypriot administration and their allies in the region violate the rights of Turkey and the Turkish Republic of Northern Cyprus (TRNC).

“There is no country which can remain silent when other countries build networks violating their rights and interests, especially a country like Turkey, which has the longest shoreline in the Eastern Mediterranean," he said.

Despite the fact that Turkey has the longest shoreline in the Mediterranean region, no country has felt the need to consult or engage in dialogue with Ankara on its initiatives in the region. Ankara has expressed a willingness to establish communication channels with various regional actors, yet all its attempts have fallen flat with no response. Egypt even organized the Eastern Mediterranean Gas Forum last year, inviting all neighboring countries – except for Turkey.

Turkey is a guarantor nation for the TRNC and has consistently contested the Greek Cypriot administration's unilateral drilling in the Eastern Mediterranean, asserting that the TRNC also has rights to the resources in the area. Since last year, Ankara has sent drilling vessels to the Eastern Mediterranean, asserting the right of Turkey and the TRNC to the resources in the region.

Özügergin also said that there is a tendency in Greek public opinion which tries to create an unfair perception that Turkey violates international law and adopts an oppressive policy based on threats.

He said that Turkey has always determined its maritime border with neighboring countries through legal agreements.

"Some of these agreements were signed during the Cold War. They were made based on mutual respect and international law, not threat or pressure," he added.

The maritime pact asserted Turkey's rights in the Eastern Mediterranean in the face of unilateral drilling by the Greek Cypriot administration, clarifying that the TRNC also has rights to the resources in the area.

On the Cyprus issue, the ambassador said that any plan forcing the Turkish side to do something against its will cannot be successful.

Underlining that the negative stance of the Greek side has been the reason for the deadlock on the island for decades, he said: "Several plans and negotiations were made for the solution in Cyprus since the 1960s. The U.N. secretaries, mediators and ethnic groups spent a lot of their time on a solution. All methods were tried. It was not because of the absence of good people or good ideas that the ultimate solution is not possible. It is obvious that the Greek side does not intend to share the management and wealth or cannot accept it, and does not take into account the political equality and security concerns of the Turkish homologs."