Turkey opposes US military decision on Greek Cyprus, says it would cause instability 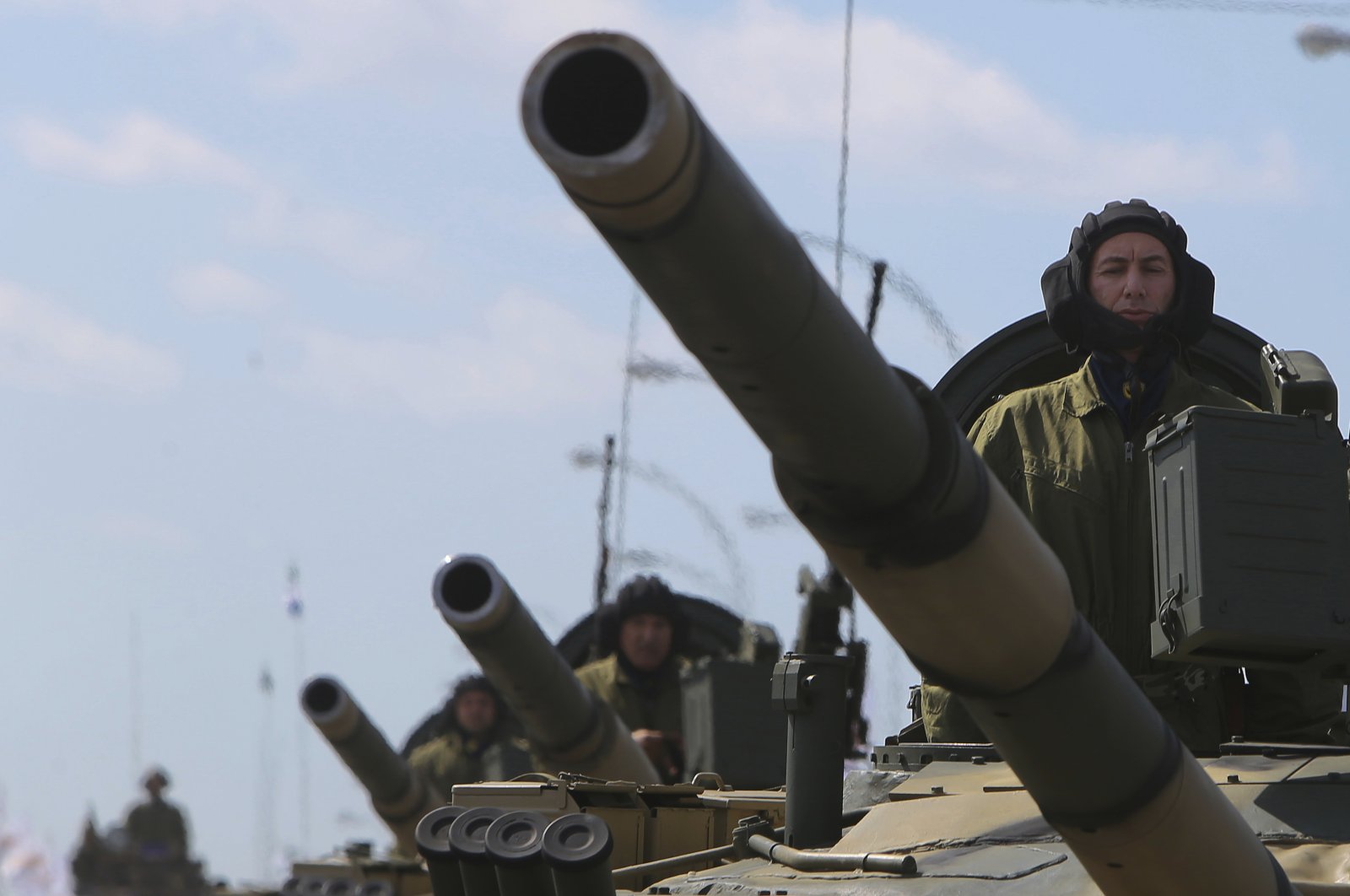 Greek Cypriot soldiers are seen on Russian-made tanks during a military parade in Nicosia on the divided island of Cyprus, Sunday, Oct. 1, 2017. (AP File Photo)
by DAILY SABAH WITH AGENCIES Jul 09, 2020 11:16 am
Edited By Eralp Yarar

Turkish and Turkish Cypriot officials criticized the U.S.'s decision to include the Greek Cypriots in their military training program, saying that it does not contribute to a solution on the divided island

Turkey and the Republic of Northern Cyprus (TRNC) criticized the U.S. for conducting military training with the Greek Cypriot administration in its International Military Education and Training Program.

"Initiatives that do not observe the balance between parties will not contribute to establishing a secure environment on the Island, nor will they help keep peace and stability in the Eastern Mediterranean," Foreign Ministry spokesman Hami Aksoy said in a statement Wednesday.

The statement was published in response to the U.S. plans to include the Greek Cypriot administration in its International Military Education and Training Program for 2020, in defiance of Turkey's opposition.

The statement continued by saying that Turkey supports the stance of the TRNC in this matter.

"As we have stressed many times before, these steps will not contribute to finding a solution to the Cyprus issue but instead strengthening the uncompromising approach of the Greek side," the statement added.

On Wednesday, U.S. Secretary of State Mike Pompeo announced that the U.S. had included the Greek Cypriot administration in its International Military Education and Training Program for 2020.

"The Department of State intends to provide International Military Education and Training funding to that country, contingent on congressional appropriations and our notification of Congress," Pompeo said at a press briefing in Washington.

"This is part of our efforts to enhance relationships with key regional partners to promote stability in the Eastern Mediterranean," he added.

"All steps taken without considering equal treatment for both sides on the Island violate the law and fairness," Çelik said on Twitter, adding that such an attitude has never proved useful.

"The Greek government and the Greek Cypriot administration will not get any results by complaining about Turkey and TRNC to other countries," Çelik said, adding that Turkey and the TRNC will continue to protect their interests.

Çelik also said Greece's and the Greek Cypriot administration's unlawful acts have only produced deadlock on the island while nobody kept their promises made at the Bürgenstock Summit.

"This hypocritical stance has only encouraged Greece's and the Greek Cypriot Administration's pro-deadlock policies," Çelik said, adding that the U.S.'s decision will also add to the problem.

Meanwhile, the TRNC also criticized the U.S. for its decision.

"It is not understandable how to benefit regional stability by increasing bilateral military activities and programs between the U.S. and Greek Cyprus rather than a comprehensive dialogue and cooperation involving all sides," the Presidency of the TRNC said in a statement.

The statement noted that one-sided initiatives would harm both sides' efforts on the island and regional stability."The way for the U.S. to contribute to regional peace and stability rather than military support and cooperation is through balancing both sides in Cyprus and promoting constructive dialogue and cooperation between regional actors," said the statement.

Pompeo said the State Department for the first time will fund military training for the Greek Cypriot administration as part of "our expanding security relationship."

"This is part of our efforts to enhance relationships with key regional partners to promote stability in the Eastern Mediterranean," Pompeo told reporters.

The cooperation will be part of the U.S. International Military Education and Training program, which seeks to train foreign officers and increase friendly nations' interoperability with the U.S. military.

The U.S. imposed the embargo in 1987 in a bid to avoid an arms race and encourage a peaceful resolution on the island.

Critics say the decision backfired by forcing the Greek Cypriot administration, now an E.U. member, to seek other partners, even as Turkey angered the U.S. by buying an advanced arms system from Russia.

The island has been divided since 1974 when a Greek Cypriot coup was followed by violence against the island's Turks and Ankara's intervention as a guarantor power.

The island has remained largely peaceful in the ensuing decades, with Greek Cypriot and Turkish Cypriot leaders working to build ties in recent years.

At the same time, U.S. officials have encouraged the warming relations with Israel of both the Greek Cypriot administration and Greece.

Negotiations over Cyprus resumed after a 2004 U.N.-backed Annan Plan to reunify the Turkish Cypriot and Greek Cypriot communities. The status of the island remains unresolved despite a series of discussions that resumed in May 2015. There has been an on-and-off peace process over recent years, with the latest failed initiative taking place in Crans-Montana, Switzerland, under the auspices of guarantor countries Turkey, Greece and the U.K. collapsing last year.