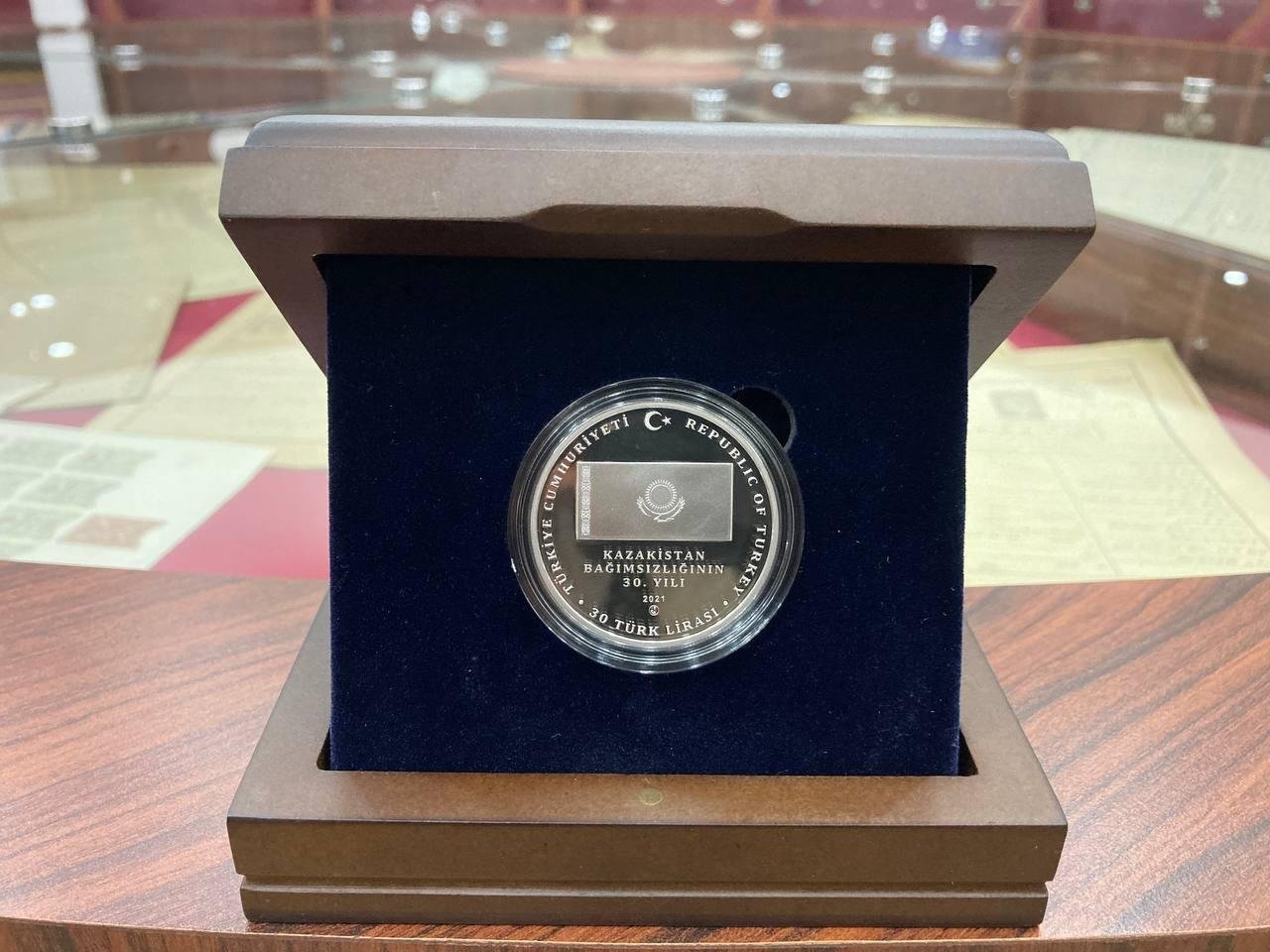 In order to mark the 30th anniversary of Kazakhstan's independence, a commemorative coin was presented in Istanbul on Thursday.

The event to present the coin dedicated to the 30th anniversary of Kazakhstan's independence was attended by Ambassador of Kazakhstan to Turkey Abzal Saparbekuly, Consul General of Kazakhstan in Istanbul Alim Bayel, Director of the Turkish State Mint Abdullah Yasir Şahin, and representatives of academia and the media.

During the event, Bayel noted that the design of the silver coin was developed jointly with the Turkish State Mint, and reflects Kazakhstan’s rich history and its role as the heart of the Turkic world. Special focus was placed on the Turkic Khaganate and Golden Horde, empires, to whom Kazakhstan considers itself to be a successor.

Saparbekuly also stated that the coin is a special gift of brotherly Turkey for the anniversary of Kazakh independence and serves as a token of Turkey's deep appreciation for Kazakhstan.

Şahin, for his part, said that the history of the State Mint of the Republic of Turkey, which he heads, dates back to 1467. He said that it was a great pleasure for them to present such a gift for the 30th anniversary of Kazakhstan's independence.

The obverse of the coin depicts the national flag of Kazakhstan and the inscription "30 years of Independence of Kazakhstan" in Turkish. In the middle of the reverse is a map of Kazakhstan. "Qazaqstan", the country’s name as written in the new Latin-based Kazakh alphabet, is the centerpiece of the map.

The names of some of the historical states once located on Kazakh soil are also engraved in Turkish inside the map. Namely, these are: the Sakas, Huns, Turkic Khaganate, Golden Horde and Kazakh Khanate. At the top of the back face engraved in the old Turkic script of the Orkhon-Yenisei monuments is the word "Turk." The lower part is embellished with “ram horns,” a traditional ornament common to many Turkic peoples.

The coin’s nominal value is determined to be 30 Turkish liras, although, containing some 31 grams of silver, its actual value is much higher. Bayel noted that coins of this type normally bear a face value of 20 liras, but Turkey made an exception for Kazakhstan to celebrate the 30th anniversary of its independence.

The commemorative coin will go on sale on the official website of the Turkish State Mint in a few days. Saparbekuly and Bayel expressed their confidence that the limited edition coin will be of great interest to domestic, Turkish and world collectors.