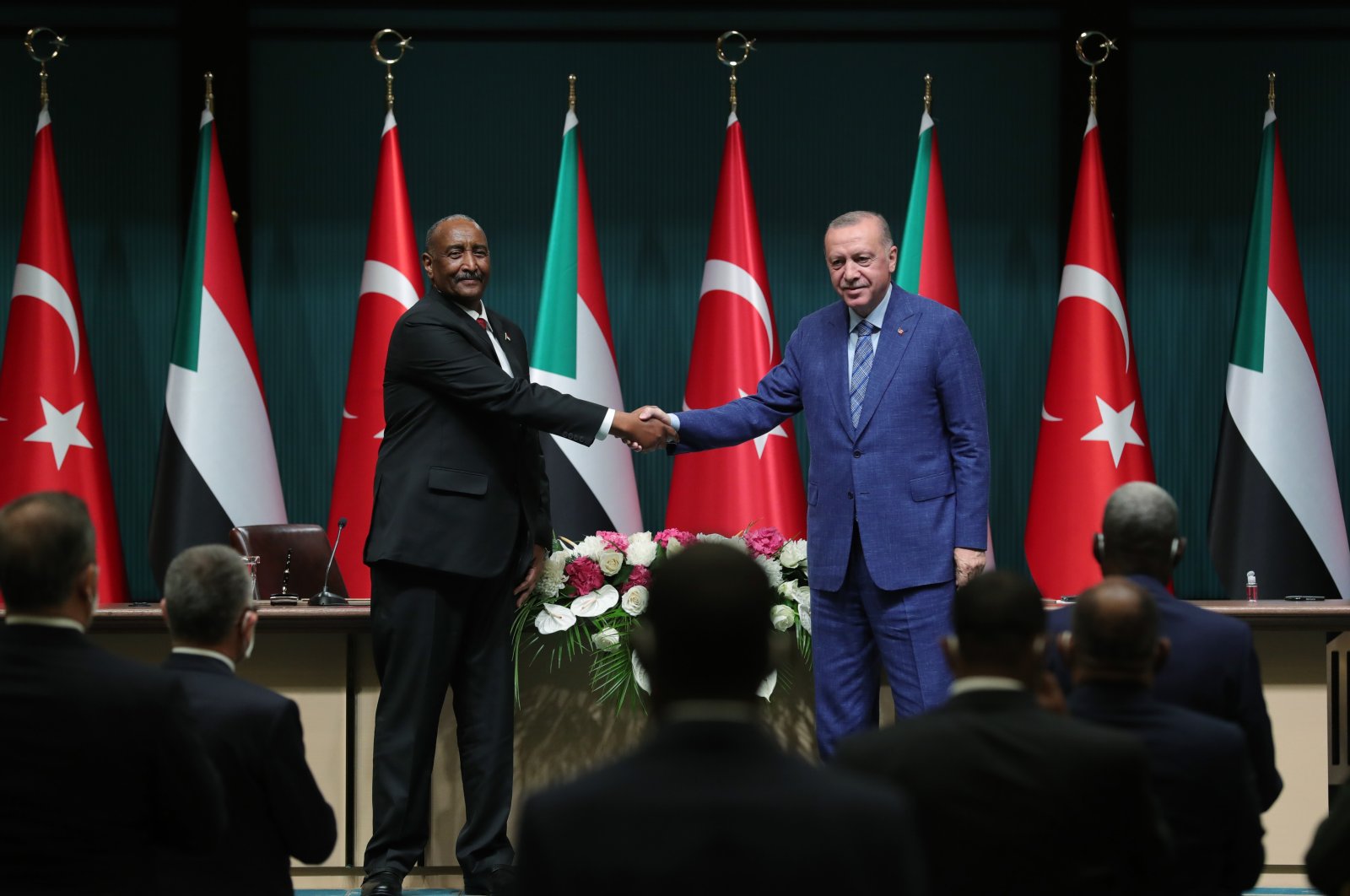 President Recep Tayyip Erdoğan said Thursday Turkey is committed to standing by the people and administration of Sudan, also stressing the will to further improve bilateral relations.

Erdoğan delivered the remarks at a news conference in the capital Ankara following his meeting with Abdel Fattah al-Burhan, the chairperson of Sudan’s Sovereign Council.

The two sides signed several memorandums of understanding (MoUs) on the sideline of the meeting.

“We are committed to standing by the brotherly people of Sudan and their administration,” Erdoğan said, adding that Ankara would maintain bilateral ties in solidarity in the future.

Erdoğan also noted that he was pleased by al-Burhan’s visit, saying he hoped this heralded a new chapter in the friendly relations as both countries shared historical and cultural ties.

The president recalled his visits to Sudan in 2006 as prime minister and in 2017 as president, stressing that the Sudanese nation embraced him with hospitality.

Emphasizing that the countries became strategic partners amid his visit in 2017, Erdoğan said the two leaders discussed a variety of issues and that Sudan had been going through a comprehensive period of transition since 2019 while al-Burhan shouldered a hard role during a critical period.

Since then, the Sudanese transition government has made great progress and saw achievements under the leadership of al-Buhran, according to Erdoğan, who said the Sudanese nation would reach the level they deserve after years of hardships.

The Turkish president expressed his satisfaction with the removal of Sudan’s overdue debts to the World Bank, African Development Bank and International Monetary Fund (IMF), as well as with the Sudanese banks’ inclusion in the international banking system.

“We have agreed to revive activities of our inter-ministerial commissions operating under the Council of High-Level Strategic Partnership and mixed financial commission,” Erdoğan said. “We have reaffirmed our determination to advance cooperation in all fields, especially in energy, mining, agriculture, health, finance, banking and the defense industry.”

The president further noted that Turkey would step up its efforts to contribute to the development of Sudan and improving its infrastructure.

“It is possible to see the deep traces of mutual past with Sudan in the Palace of Ali Dinar in Darfur, the masterpiece Masjid al-Kabir in Khartoum, and Suakin, the pearl of the Red Sea," Erdoğan said, adding that the Turkish Cooperation and Coordination Agency (TIKA) was meticulously restoring mosques along with a customs building in Suakin.

For his part, al-Burhan hailed Turkey, saying the country has “always stood by Sudan.”

He also expressed condolences over the recent wildfires in Turkey’s western and southern regions, noting that the countries enjoyed deep, historical relations, while the state officials today had the responsibility of maintaining these ties.

Praising Turkey for standing as one of the leading countries of its region and the world, the Sudanese official said Ankara offered help amid the COVID-19 crisis while also providing educational assistance for Sudanese students, hosting and training them in addition to extending a hand to lift the blockade on Sudan.