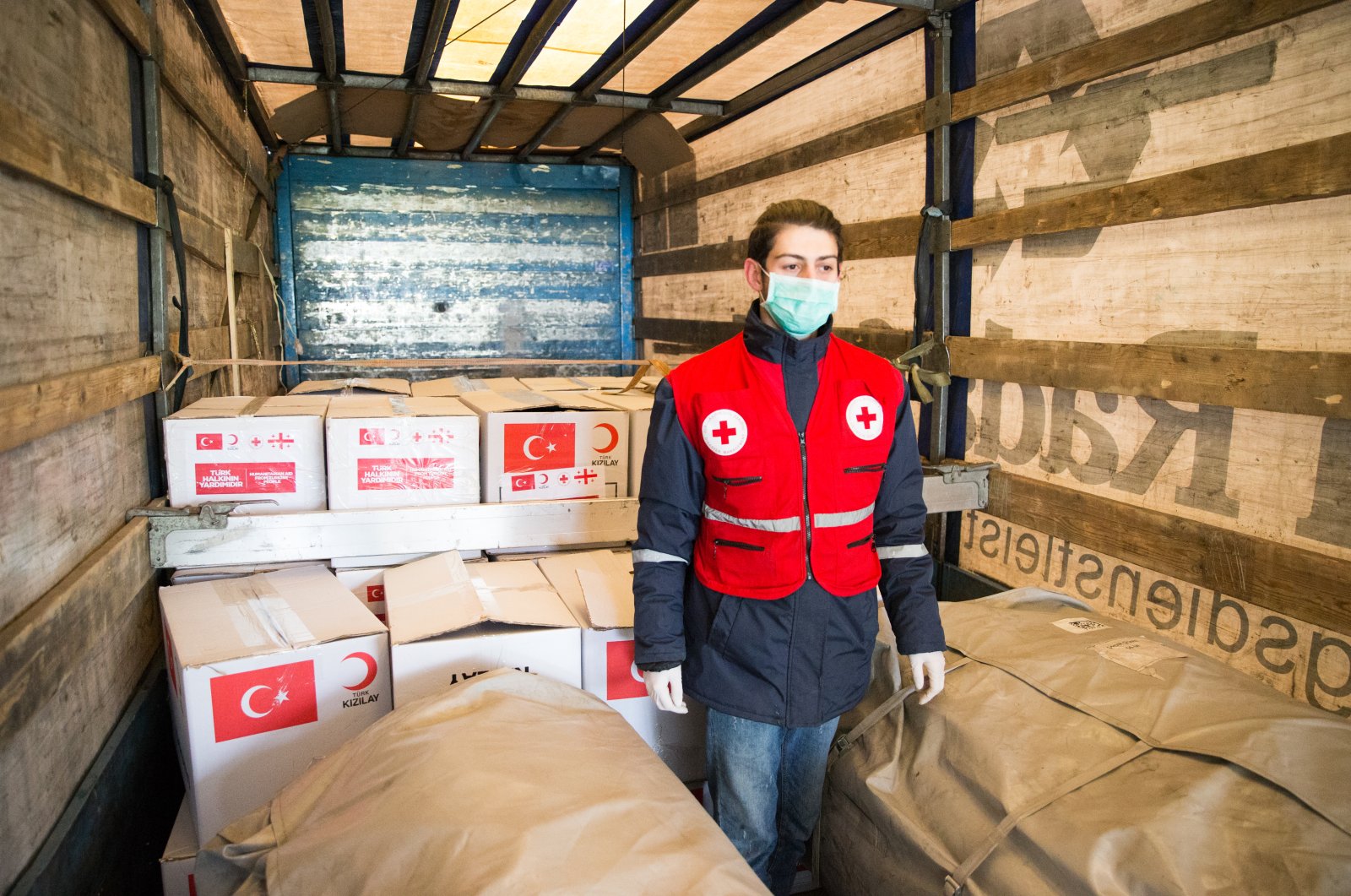 In the latest episode of its efforts to promote cooperation and solidarity among countries against the global coronavirus outbreak, Turkey delivered humanitarian aid to Georgia and Moldova

Turkey continues its humanitarian efforts to provide medical aid to other countries amid a global fight against the novel coronavirus pandemic that threatens all humanity. In its latest effort, Turkey delivered medical aid to both Georgia and Moldova.

The Turkish Red Crescent has sent aid to Georgia to support the country's fight with COVID-19 as part of the collaboration with the aid agency's Georgian chapter.

Yazgan said the Turkish Red Crescent sent needed equipment to Georgia, and they will continue this support in the future.

Stating that they have received a significant amount of humanitarian aid from Turkey, Loladze said, "I thank Turkish Red Crescent for their support."

Turkey's state-run charity also supplied medical aid to Moldova on Friday to help the fight against the novel coronavirus.

The Turkish Cooperation and Coordination Agency (TIKA) delivered medical equipment at a ceremony held at the Moldova Interior Ministry that included Interior Minister Pavel Voiku and TIKA's Kishenev program coordinator Selda Özdenoğlu who highlighted the importance of protecting medical and security staff during the fight.

Aid was also sent to Moldova's autonomous region, Gagauzia, which is home to a mostly Gagauz population, an Orthodox Christian Turkic-speaking community, she added.

TİKA, which has been Turkey's flagship international development aid agency since its inception, is known for extending a helping hand to countries on every continent with a diverse array of projects, including vocational training, agricultural support, health services and infrastructure. It represents a significant arm of Turkey's multilayered humanitarian foreign policy and showcases the country's solidarity with countries it previously maintained low-profile ties with.

After originating in China last December, COVID-19 has spread to at least 185 countries and regions.

The pandemic has killed more than 195,900 people, with total infections nearing 2.8 million, according to figures compiled by U.S.-based Johns Hopkins University. An excess of 781,300 people have recovered.

Turkey has made a name for itself in the last decade with its humanitarian efforts. The country has already become a prominent figure of this fresh statecraft by sending medical aid packages almost daily to many corners of the globe.

"So far, we have delivered medical equipment to 34 countries," President Recep Tayyip Erdoğan said two weeks ago during a news conference following a Cabinet meeting in Istanbul. "We will continue our support (other countries) in the upcoming days as well," he said. The number has escalated since then.

So far, Turkey has received aid requests from more than 100 countries. Managing to deliver medical equipment to more than 50 of them, the country has provided consultancy to many others, aiming to share its resources and experiences with the world in a period of crisis. Turkey's aid packages mostly include medical masks, protective overalls and gloves, as well as disinfectants. All equipment is produced at military-owned factories and at sewing workshops that produce military uniforms and other clothing for the army.

Turkey's neighbor Bulgaria followed, where 50,000 masks, 100,000 protective overalls and 100,000 protective glasses were delivered. Ankara then sent TL 72 million ($10.3 million) of financial aid, along with thousands of units of medical equipment, to the Turkish Republic of Northern Cyprus (TRNC). Iran, one of the countries hit hardest by the virus, received 10,000 diagnosis kits, 4,715 overalls, 20,000 aprons, 2000 glasses, 4000 N95 masks and 73,000 three-layered masks. To Iraq, 30,000 masks were sent along with 475 food packages and disinfectants. Lebanon also received food aid with deliveries being distributed to more than 600 families in the poorest parts of the capital city, Beirut.

Europe also received large medical aid packages from Turkey. Italy and Spain, two of the worst-hit countries on the continent, received supplies on April 1. The U.K. and Ireland became other nations that accepted Turkey's aid deliveries. Multiple shipments have been sent to the U.K. over the past few weeks with the latest taking place a couple of days ago. Ankara helped to fulfill the protective overall needs of the virus-hit country. Ireland also received packages of aid filled with protective kits. Both nations expressed great gratitude to Turkey, with Ireland recalling the humanitarian aid the Ottoman Empire delivered 173 years ago, referring to Turkey's tradition of assistance.

Turkey has a long tradition of sending humanitarian aid to countries facing difficulties, even to those it has tense diplomatic relations with. For instance, back in 1938, only a decade after the country’s foundation following a bloody war, Turkey sent medicine to China amid the outbreak of cholera in far eastern Asia. Similarly, in 1941, Turkey sent medicine to the Greek army upon request from Greece, a country that fought against Turkey during the liberation war. Similar aid has been provided to many other countries over the years, including Ethiopia, Bangladesh and Afghanistan.

Africa has also not been left alone, as several of the continent's countries received medical aid. On April 9, 400 hygiene packages were delivered to Guinea, while Somalia accepted Turkish aid on April 17. Lesotho was another African country that received Turkish supplies.

Two of Turkey's major allies, the U.S. and Russia, received aid indirectly. During a period when no countries sold medical products, Turkey allowed its private firms to export to these countries. Thanks to this privilege, both the U.S. and Russia received tens of thousands of diagnosis kits and masks.

International organizations also praised Turkey for its support, stating that it has had an "exemplary" attitude during such a difficult time. NATO's strategic military command welcomed Turkey's delivery of medical aid to Bosnia-Herzegovina, among other Balkan countries, in the fight against the coronavirus pandemic.