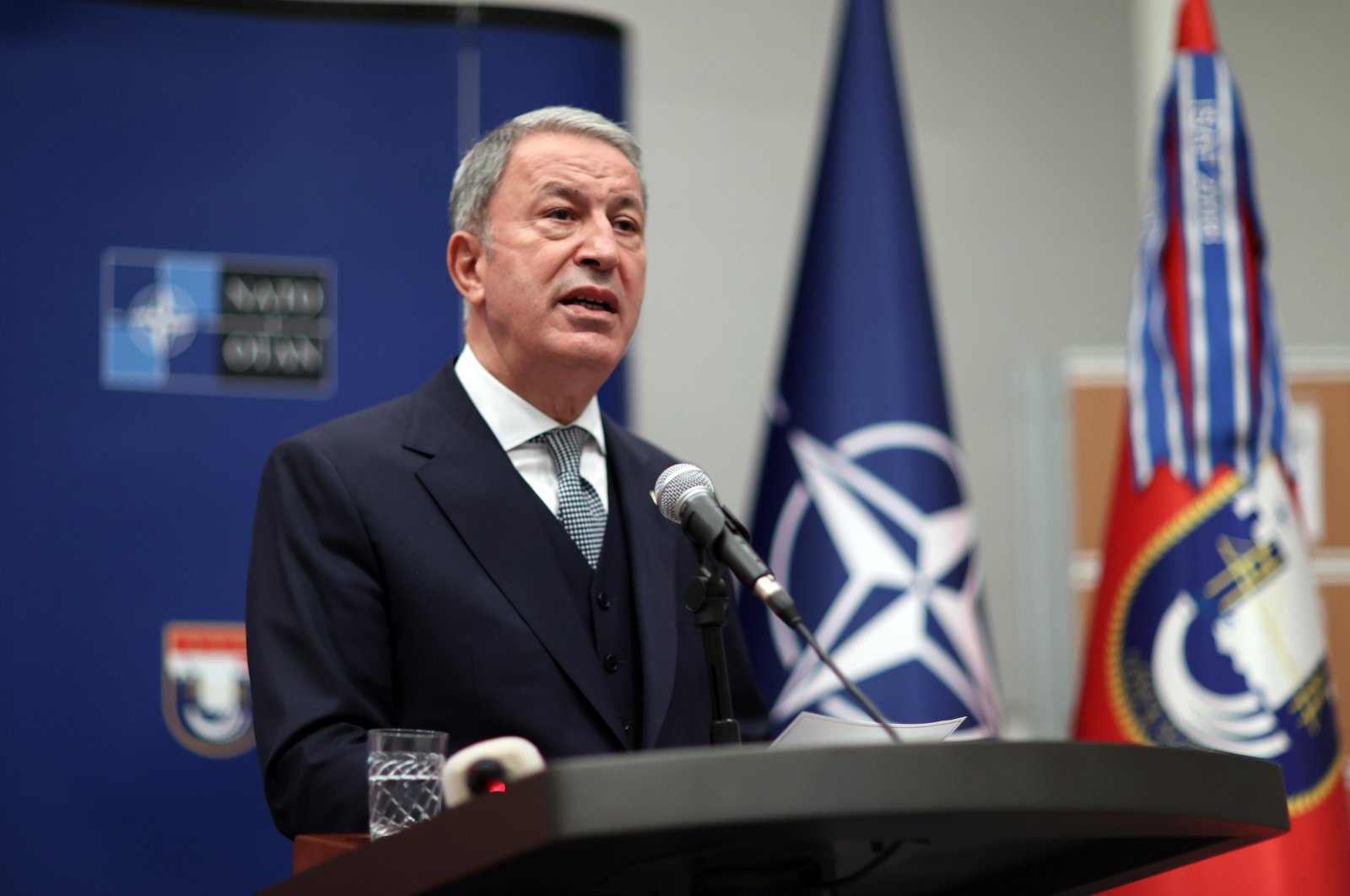 Defense Minister Hulusi Akar speaks after he followed the activities of the "Outstanding Observer Day" of the On Guard-2021 Exercise in the capital Ankara, Turkey, Nov. 19, 2021. (AA Photo)
by DAILY SABAH Nov 19, 2021 10:21 am
RECOMMENDED

As NATO's second-largest army, Turkey shares the alliance's burden and all its values, putting NATO at the center of its own security and at the same time being at the center of the bloc's security, Defense Minister Hulusi Akar said Friday.

Akar, along with senior commanders, followed the activities of the "Outstanding Observer Day" of the On Guard-2021 Exercise. Briefed at the Multinational Joint Warfare Center Command, where the exercise was carried out, Akar stated that we are passing through a period of increased risks and threats at the global and regional level.

Pointing out that the responsibility of international security and defense organizations is heavier than ever, Akar said: "NATO is an organization that has formed the basis of Europe's security since the Second World War. We believe that NATO, as the most successful alliance in history, is alive and active as it has always been."

Underlining the fact that Turkey has been a NATO member for nearly 70 years, Akar said: "While Turkey is fighting against Daesh, al-Qaida, PKK/YPG, FETÖ and other terrorist organizations at the same time, despite its preoccupation with the risks, threats and dangers in its region, it continues to contribute uninterruptedly to the alliance's exercises, force structure and staff. It does whatever it takes to protect NATO and Europe's borders against terrorism, smuggling and human trafficking. As NATO's second largest army, it shares the alliance's burden and all its values, putting NATO at the center of its own security and at the same time being at the center of NATO's security."

Noting that important elements such as the Allied Land Command, Maritime Security Center of Excellence, Counter-Terrorism Center of Excellence and Partnership for Peace Training Center, Ballistic Missile Radar Field and Forward Operations Air Base are located in Turkey, these headquarters are the most important elements that make up NATO's military structure, Akar described them as indispensable components of the general understanding of defense and deterrence.

Stating that such exercises not only increase interoperability, but also contribute to the solidarity process, improve combat capabilities and strengthen the alliance's deterrence, Akar thanked those who contributed to the planning and execution of the exercise's execution process.

Turkey also hosts many NATO initiatives. There is a NATO headquarters in western Izmir province, an air base in southern Adana province, another one in southeastern Diyarbakır and a NATO Rapid Deployable Corps in Istanbul. It also hosts the AN/TPY-2 radar in the Malatya province as part of the organization’s missile shield project.

Apart from all these, in 2018 alone, Turkey contributed $101 million to the common funding of NATO. But despite the country’s commitment to the organization, it has not received the support it expects.

Foreign Minister Mevlüt Çavuşoğlu recently said that Ankara is a strong NATO ally and fulfills its obligations. However, he criticized NATO, saying that despite Turkey fulfilling all its obligations as part of the organization, its defense needs are not always met.

Over time, siding with terrorists rather than Turkey became a pattern for many NATO member countries, particularly the United States. The U.S. primarily partnered with the Syrian offshoot of the PKK terrorist organization, the YPG, in northeastern Syria to fight the Daesh terrorist group. Turkey strongly opposed the terrorist group’s presence in northern Syria and the formation of a terror corridor, which has been a major sticking point in strained Turkey-U.S. relations. Under the pretext of fighting Daesh, the U.S. has provided military training and given truckloads of military support to the YPG, despite its NATO ally's security concerns.

NATO also failed Turkey in supporting the country from the destructive nature of the civil war in Syria. In 2012, Turkey asked that NATO Patriot missiles be placed on its borders to secure them. However, although the missiles were in Turkey for some time, before long, NATO countries took them back, leaving Turkey alone to defend itself.