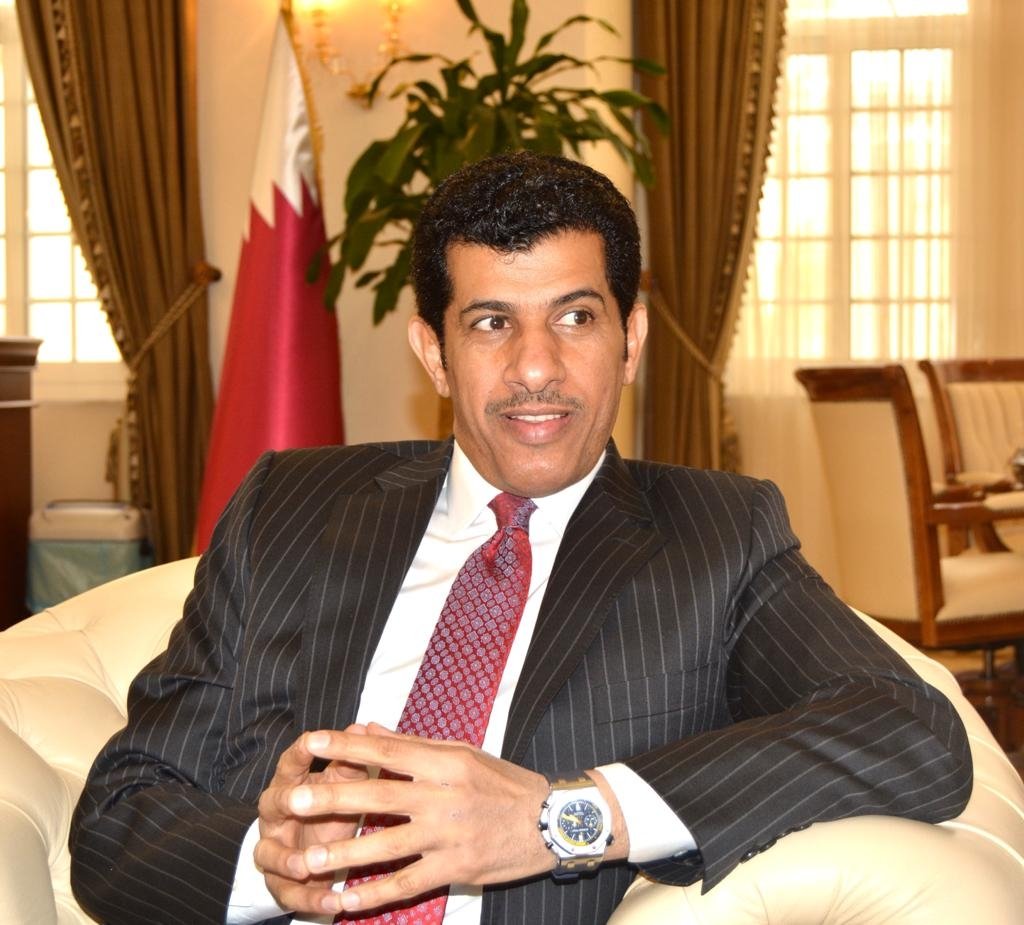 Doha's Ambassador to Ankara Salem Mubarak Al-Shafi speaks during a meeting at At the Qatari Embassy in Ankara in 2018.
by Nur Özkan Erbay Nov 22, 2020 1:40 pm
RECOMMENDED

Cooperation between Turkey and Qatar will be strengthened through several agreements that cover the defense industry, education, military and trade, Doha's Ambassador to Ankara Salem Mubarak Al-Shafi said.

Al-Shafi, in an exclusive interview with Daily Sabah, stressed that he expected new agreements to be signed during the High Strategic Committee to be held at the end of the month and that Qatar has great confidence in Turkish industry.

As part of bilateral cooperation, Turkey’s Anadolu Shipyard last month manufactured the first of two cadet training ships (CTS), the QTS 91 Al Doha for Qatar's naval forces. The vessel was developed based on the Turkish shipyard’s own design, with the addition of special features in line with the Qatari Emiri Navy’s demands.

“The launching of the training ship (Al Doha) was undoubtedly a new milestone in relations between Qatar and Turkey, while it is an important stage of reaping the fruits of cooperation and military investment,” the envoy pointed out.

Al-Shafi also highlighted that adding the QTS 91 Al Doha to Doha’s navy reflected the country’s confidence in the Turkish industry and that it further strengthened the country's security and stability in the region, as well as both country's positions.

Highlighting that more than 50 agreements have been signed between Ankara and Doha since the establishment of the High Strategic Committee in 2014, the Qatari envoy said that new agreements signed each year help diversify and extend the field of cooperation.

Saying there are opportunities for projects between the countries both in the government and the private sector, Al-Shafi said that efforts were underway to enhance investments despite the global economic slowdown due to the pandemic.

“Especially supermarkets in Qatar recently have engaged in several initiatives to support and introduce Turkish products, reflecting the brotherly relations and rapprochement between the two countries,” Al-Shafi said. He added that Qatari companies, which are the third-largest investors in the construction industry, have a concrete presence in the Turkish market.

“Turkey is a preferred country by the people of Qatar regarding investment as well as tourism,” the ambassador said, adding that Turkish companies have signed big agreements to carry out projects in infrastructure and construction for the 2022 World Cup to be held in Qatar.

Underlining that Turkey and Qatar cooperate on regional issues as well as economic ones, Al-Shafi said the countries' policies towards Libya are coherent. Stating that the recently signed cease-fire between the rival parties, namely the Tripoli-based Government of National Accord (GNA) and the Tobruk-based House of Representatives, allied with putschist Gen. Khalifa Haftar, was welcomed by Qatar, the envoy also said that it supports all efforts that contribute to the war-ravaged country’s stability, sovereignty and unity. Al-Shafi said they hoped that the peace talks would result in an extensive political solution that establishes a country where the rule of law is respected and civilian institutions are established. Stressing that Doha has supported the internationally recognized government from the start, Al-Shafi said it was a position shared by Turkey.

“We aim to bring peace, enhance the prosperity and stability of Libya and provide benefits for both sides,” he added.

Turkey and Qatar played a pivotal role in supporting the legitimate Libyan government and defending Tripoli against Haftar's forces in a 14-month long offensive this year, while countries including Egypt, the United Arab Emirates (UAE), France and Russia supported the putschist general.

Qatar and Turkey's fight against Islamophobia

Assessing the rising discrimination, hostility, anti-Islam and anti-Muslim sentiments in Europe, Al-Shafi underlined that fighting intolerance against Islam and Muslims is of critical importance nowadays.

Stressing that Qatar and Turkey both intensely promote Islamic culture the envoy said, "Turkey and Qatar have many projects and initiatives to sustain economic resources of educational and cultural Islamic institutions which aim to remove the negative perception of Islam and increase the awareness of global values."

“True Islam plays a role in strengthening the relations between the Islamic world and the West to reduce stereotypes and false beliefs and to combat prejudice, intolerance toward Islam and Muslims in all respects. Following the recent developments and the escalation of the wave of Islamophobia, the State of Qatar has renewed its complete rejection of any form of hate speech based on belief, race or religion, condemning the growing rise of populist discourses that incite insult to religions. Undoubtedly, the period we are in is very critical. With a global crisis and a profound misunderstanding of Islam, the use of religion in the wrong contexts is often confused with political motives that at times cause events and loss of life. Therefore, it is extremely important to work patiently by correcting misunderstandings," Al-Shafi continued.

Expressing that Qatar attaches special importance to educational projects as one of the main pillars of sustainable development, Al-Shafi also stated that the nation is carrying out many educational projects both alone and in cooperation with international organizations in various parts of the world.

“Among the initiatives and efforts to educate children in various countries is "Education Above All," a global initiative founded in 2012 by His Highness Sheikha Mozah Bint Nasser, which contributes to the education of millions of children who are living in poverty and conflict in dozens of countries and provides them with projects, educational resources and opportunities. Education gives real hope for a better future as it is the most important element of individual empowerment," Al-Shafi stressed.

Al-Shafi indicated that one of Qatar's top priorities was supporting the development of education in countries with which it is friendly, saying that the development fund continues its work in Turkey and many other countries.

“For example, the financing of the academic and administrative buildings of Ibni Haldun University, which was opened in Istanbul with the participation of President Recep Tayyip Erdogan, was one of the major educational projects realized by the Qatar Development Fund with a $25 million contribution. In addition to financial support services, it also includes the expansion of a modern technological network and the supply and installation of educational equipment. In addition, it has also covered the necessary consultancy services for the preparation of designs, tender documents and supervision of project implementation. With these types of projects serving the education sector in Turkey, scholarships for studying Arabic along with other student exchange programs, joint research and studies, the State of Qatar has created great and effective participation at the grassroots level in Turkey that reflects the depth of the relationship with the Turkish people. This confirms the reputation of the Turkish people's admiration for the State of Qatar and all its institutions” Al-Shafi concluded.