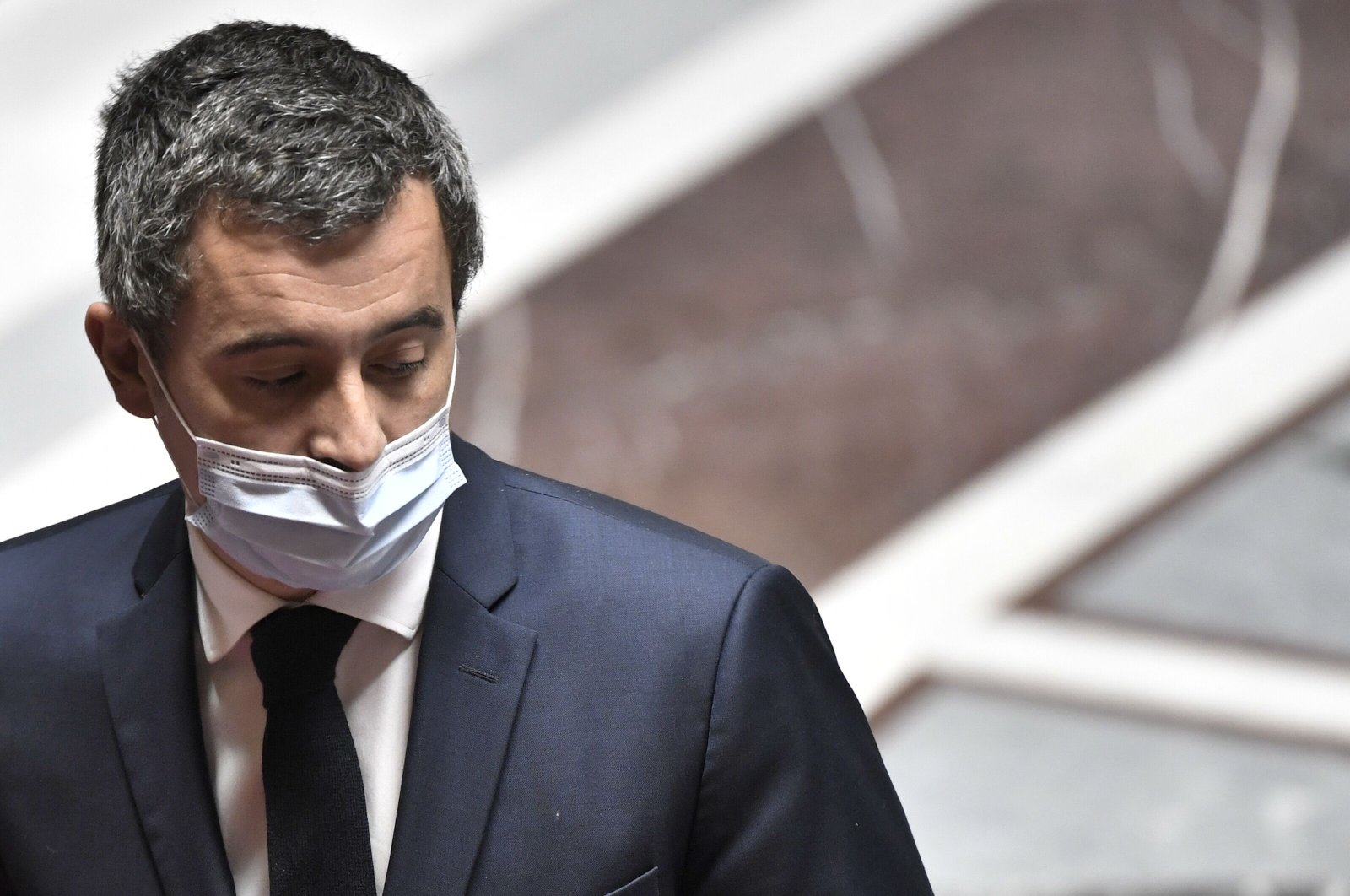 French Interior Minister Gerald Darmanin looks over during a session of questions to the government at the French National Assembly in Paris, France, Nov. 3, 2020. (AFP Photo)
by DAILY SABAH WITH AGENCIES
Nov 04, 2020 9:38 pm

The ministry pointed out in a statement that there was no such organization of a movement called the "Grey Wolves," which was banned by the French government on Wednesday.

France's "imaginary decision," as if such a movement and formation existed, is the "final manifestation of the contradictory psychology of the country," the ministry said.

However, it added, it is unacceptable to ban cultural symbols used in many countries around the world, which are extremely common and have no illegal dimensions.

The freedom of association, expression and demonstration for the Turkish community in France should be protected within the context of universal human rights and regulations, the ministry stressed.

The decision shows that "the French government has become a complete captive of Armenian circles," it noted, saying that France ignores "the rising incitement of the fanatical Armenian diaspora" within its borders, as well as threats and attacks targeting Turkish people and diplomatic missions in recent months.

According to the ministry, "the provocative and hypocritical decision of the French government" was reminiscent of the country's bad record in fighting terrorist organizations, including, in particular, the Armenian Secret Army for the Liberation of Armenia (ASALA), which killed Turkish diplomats, as well as the PKK and the Gülenist Terror Group (FETÖ), which have received protection and support from France.

The ministry also accused the French government of tolerating associations affiliated with the PKK and FETÖ that have been operating openly across the country for years and of leaving violence against the Turkish community and interests unpunished on the grounds of freedom of demonstration and expression.

Turkey has long criticized the European authorities for tolerating PKK activities in the country and has pressured them to take stricter measures against the group's propaganda, recruitment and fundraising activities.

France is one of the leading European countries that openly shows sympathy to PKK terrorists and its Syrian wing, in particular, the YPG. In fact, support of the YPG in Syria by France, the United States and several other Western countries has become one of the stumbling blocks in bilateral ties between Turkey and its two NATO allies.

Back in April 2019, French President Emmanuel Macron hosted a delegation of the so-called SDF, which is dominated by the YPG terrorist group. The PKK, which is listed as a terrorist group by Turkey, the U.S. and the European Union, has waged a terror campaign against Turkey for more than four decades and has been responsible for the deaths of nearly 40,000 people, including women and children.

In another incident, back in September, it was revealed that a history book being used in French high schools included PKK/YPG propaganda.

The text, which is not officially included in the curriculum prepared by the French Ministry of Education but used as supplementary educational material, provides two full pages sharing the group's ideology.

There is a section in the book titled "The Nation Without a Country: Kurds" that includes the phrase, "Kurds are the biggest nation on earth who do not have a country."

The publication also includes information regarding the history of the PKK, which it claims is fighting for the rights of the Kurds. Ironically, the group has killed tens of thousands of civilians, of which the Kurdish people are the majority, through its terrorist activities.

France said it had disbanded the Grey Wolves on Wednesday, two days after announcing a ban against the alleged Turkish nationalist group.

The ban on the Grey Wolves was approved during a weekly Cabinet meeting, government spokesperson Gabriel Attal said.

Interior Minister Gerald Darmanin said in a tweet announcing the group's dissolution that it "incites discrimination and hatred and is implicated in violent actions.”

France's Grey Wolves ban came against the backdrop of heightened tension between the country's Armenian and Turkish communities over the conflict in the Armenian-occupied region of Nagorno-Karabakh.

Turkey has strongly backed its ally Baku in the fight over the region that is part of Azerbaijan but has been occupied by Armenian forces since a war in the 1990s claimed 30,000 lives.

Four people were wounded outside Lyon last week in clashes between suspected Turkish and Armenian communities.

The decision also came amid heightened tensions between France and Turkey in recent months.