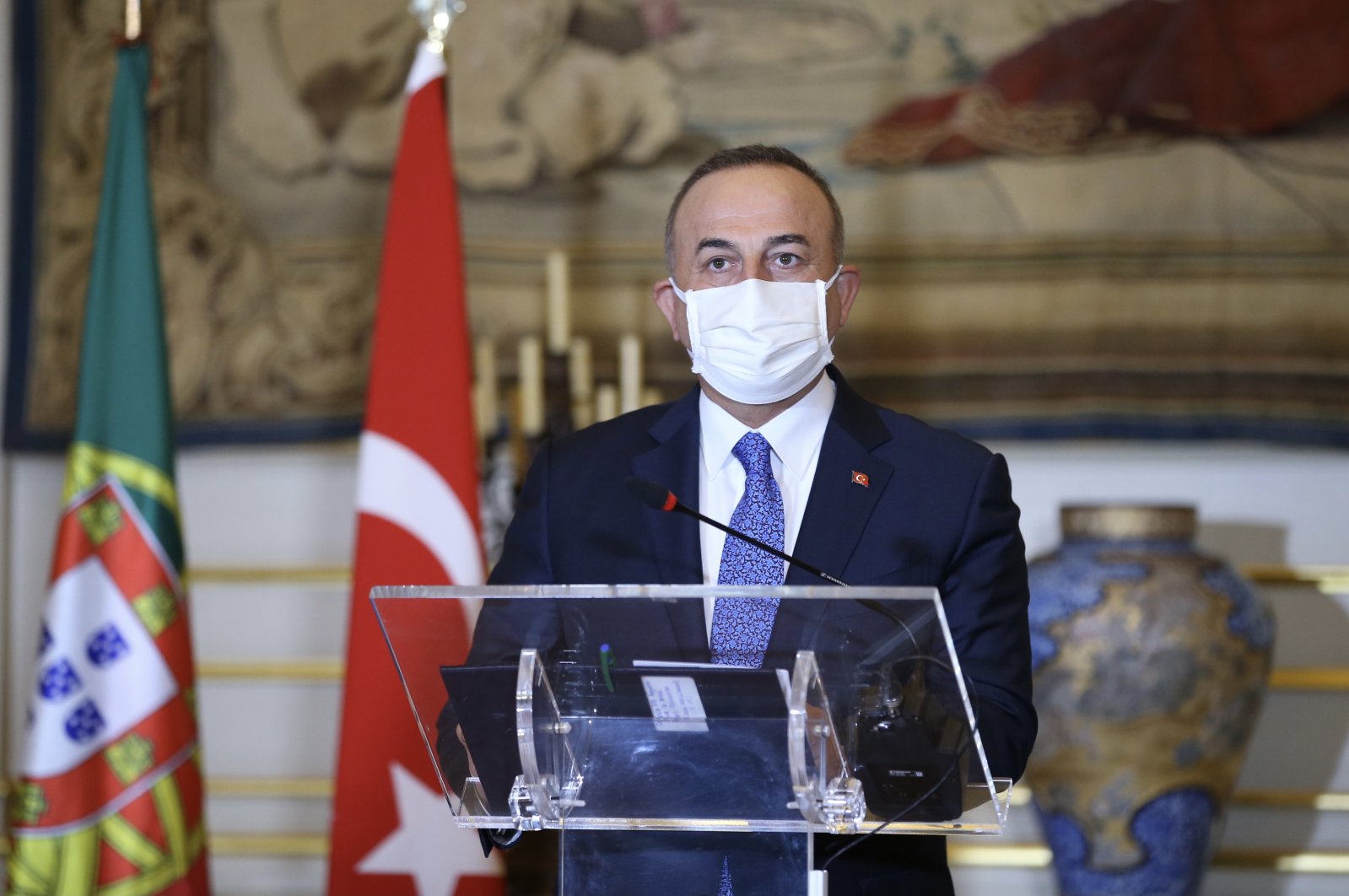 Turkey and France are working on a road map to normalize ties and talks are going well, Foreign Minister Mevlüt Çavuşoğlu said late Thursday, adding Ankara was ready to improve ties with its NATO ally if Paris showed the same willingness.

"Turkey is not categorically against France, but France has been against Turkey categorically since Operation Peace Spring," Çavuşoğlu said.

"In the end, we had a very constructive phone conversation with my French counterpart Jean-Yves Le Drian and we agreed that we should work on a road map to normalize relations," he said.

"We have been working on an action plan, or road map, to normalize relations and it has been going well ... If France is sincere, Turkey is ready to normalize ties with France as well," Çavuşoğlu said.

He added that relations with the 27-nation European Union as a whole would benefit from a "better atmosphere."

Turkey has repeatedly traded barbs with France over policies in Syria, Libya, the Eastern Mediterranean and Nagorno-Karabakh, as well as over the publication of cartoons of the Prophet Muhammad in France.

Ankara and Paris previously traded barbs after French officials in 2018 met with the leaders of the YPG.

Last month, the EU prepared punitive measures over Turkey's dispute with members of Greece and the Greek Cypriot administration over rights to offshore resources in the Eastern Mediterranean but decided to postpone the measures until March despite an earlier push by France to sanction Ankara.

After months of tensions, President Recep Tayyip Erdoğan and French President Emmanuel Macron discussed their differences in a phone call in September, agreeing to improve ties. But, the two presidents later traded accusations over a host of issues as tensions flared again.

Erdoğan in December said he hoped France would get rid of Macron as soon as possible.

"Macron is trouble for France. With Macron, France is passing through a very, very dangerous period," the president said then.

Regarding the Eastern Mediterranean tensions, Turkey and Greece's foreign ministers are planning to meet in the coming weeks, Çavuşoğlu also said Thursday.

"There is a window of opportunity for better dialogue with Greece, right now. And we are planning to meet with a Greek foreign minister who is personally a good friend of mine, Nikos Dendias, in the coming weeks," he said.

Turkey is ready to open a new page in relations with the EU, he added.

Çavuşoğlu also said that Portugal's term presidency of the EU is a window of opportunity for Turkey because of Lisbon's balanced and objective stance on the current issues between Ankara and Brussels.

Portugal has just taken over the EU's rotating presidency.

The top Turkish diplomat said Turkey and the EU should not only focus on problematic areas but also other issues such as the migration deal.

"We need to revive this agreement because migration is an ongoing problem, and due to the (coronavirus) pandemic, it seems that this problem will continue for years. Therefore, we should continue our cooperation," said Çavuşoğlu.

"Modernization of the Customs Union agreement is mutually beneficial and visa liberalization is the promise of the European Union. And during the upcoming meetings, we want to see concrete steps from the European Union in these areas," he added.

On the Cyprus issue, Çavuşoğlu said Turkey has supported all initiatives for a lasting settlement but all of them were rejected by the Greek Cypriots.

"They excluded Turkey from all the initiatives, and Turkey was very patient. But recently, it had to start its own activities within its legitimate and registered continental shelf areas," he added.

He said negotiations for a federal solution would be a waste of time, as it has been for the past 52 years.

For his part, Portugal's top diplomat said he hoped to resolve problems with Turkey and EU member states through direct dialogue during Portugal's EU term presidency.

Silva underlined the importance of developing a positive agenda with Turkey, adding that Ankara and Brussels share common interests and concerns such as regional security, stability, the hosting of refugees and migration.

The migration deal between Turkey and the EU will mark its fifth anniversary on March 18, said Silva, adding that both parties will evaluate the outcomes of the deal.

Under the deal, Turkey was promised 6 billion euros ($6.77 billion) in financial aid, which was initially designed to be given to the country in two stages and to be used by the Turkish government to finance projects for Syrian migrants. Visa freedom for Turkish citizens was also a perk of the agreement. In addition, the customs union between Turkey and the EU was to be updated.

In exchange for these promises, Turkey took responsibility for discouraging migration through the Aegean Sea by taking stricter measures against human traffickers and improving the conditions of Syrian migrants living in Turkey. Despite significant developments controlling migration traffic, the EU has not delivered on its commitments stated in the deal.

Çavuşoğlu is also expected to meet his Spanish counterpart Arancha Gonzalez Laya in Madrid on Friday.