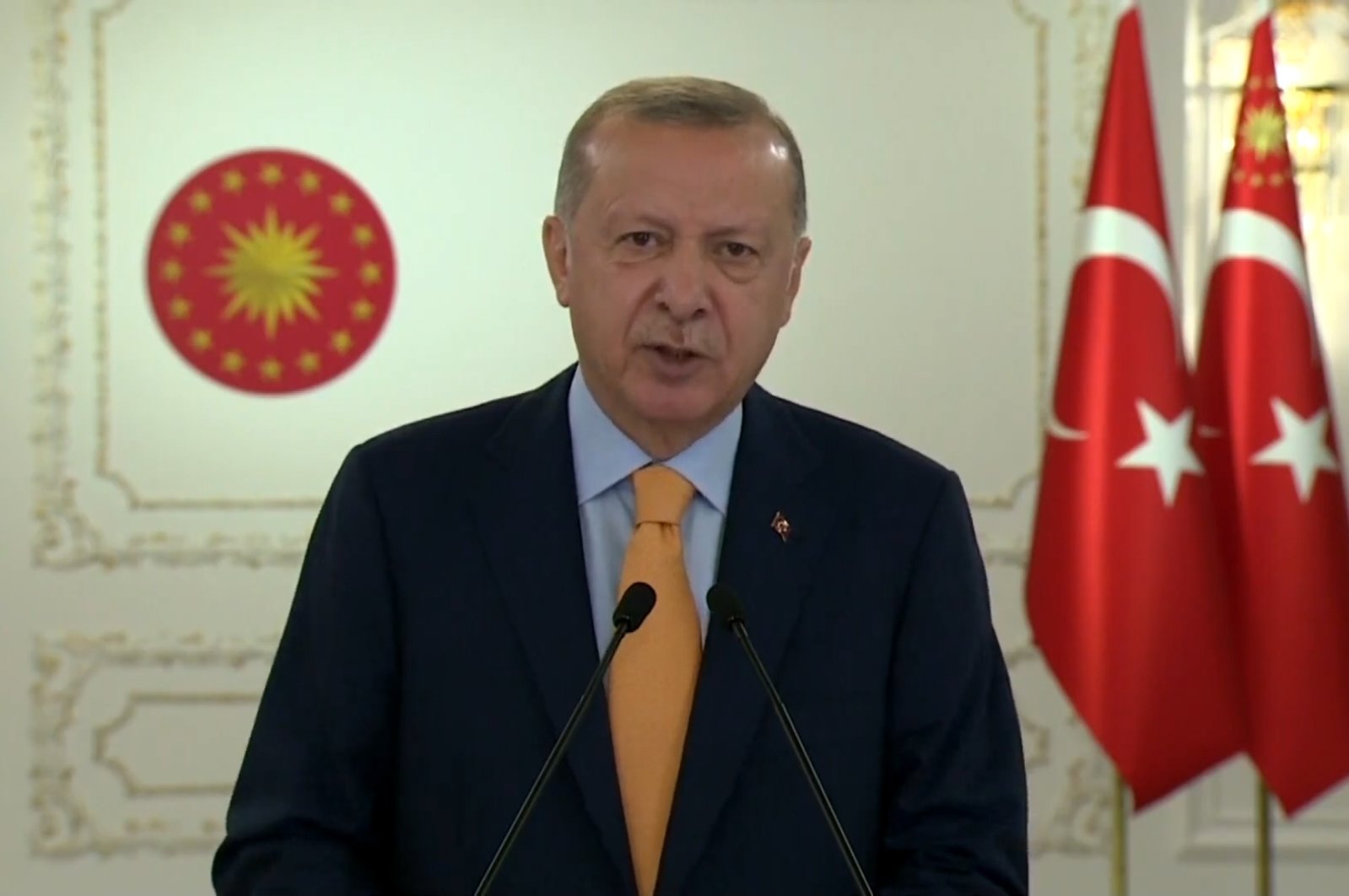 Turkey regrets that the U.N. secretary-general's call for a universal cease-fire has failed to produce results, President Recep Tayyip Erdoğan said late Tuesday at the 75th General Assembly of the United Nations via a video link.

"We regret that the United Nations Secretary-General's call for a global humanitarian cease-fire, which we also support, has not produced concrete results," he stated.

"As Turkey, we are looking for ways to eliminate threats to our country and humanity, by taking any kind of initiative if required."

Erdoğan also reiterated his call for implementing "comprehensive and meaningful reforms" at the U.N., starting with the restructuring of the U.N. Security Council (UNSC).

"Comprehensive reforms, including restructuring the Security Council, must be rapidly done," he said, reiterating his motto "the world is bigger than five," which is a reference to the five permanent members of the body.

"It took weeks before the U.N. Security Council even brought COVID-19 to its agenda. The pandemic has left countries on their own and proved once again that the world is bigger than five," he said.

Stressing the importance of reviewing mentality, institutions and rules, to prevent the loss of reputation of international organizations, Erdoğan said the fate of humanity cannot be left at the mercy of a limited number of countries.

"We must provide the Council with a more effective, democratic, transparent and accountable structure and functioning. Likewise, we should also strengthen the General Assembly, which reflects the common conscience of the international community," he urged.

Touching on the needs of global cooperation for global problems like COVID-19, he said that the world should try to use the mechanisms for multilateral cooperation in the most effective way.

Erdoğan also underlined the importance of a global effort to produce a successful vaccine against the coronavirus.

"Any future COVID-19 vaccine should be open to use by all humanity, not made into a competition," he said.

The president also touched on his country's efforts to help people affected by the civil war in Syria.

"Turkey is hosting 4 million Syrian refugees and meets the needs of just as many in border regions under Turkish control," he said.

"Today, countries like Turkey, which are hosting the highest number of refugees, save the dignity of all humanity through their sacrifices, however, some states, including some European countries, unfortunately, violate the rights of refugees and asylum-seekers."

He said civil-war Syria "continues to pose a threat to the security and stability of our region."

"As the country that struck the first and most serious blow against Daesh in the region, we (Turkey) continue to fight against the PKK/YPG terrorist organization," he added.

He also said the international community cannot find "a permanent solution to the Syrian issue without adopting the same principled attitude and decisive stance against all terrorist organizations."

"It should be a priority for all of us to resolve the conflict in Syria on the basis of the roadmap endorsed in the United Nations Security Council Resolution 2254.

"To this end, the political process initiated under the auspices of the United Nations, which is also Syrian-owned and Syrian-led, should be brought to a successful conclusion," Erdoğan said.

The president also underlined Turkey's efforts to help the legitimate government of Libya, the Government of National Accord (GNA), in the face of attacks by the forces of putschist Gen. Khalifa Haftar.

"Turkey has been the only country that gave a concrete response and support in the calls for help from the legitimate Libyan government," he said.

Erdoğan called on the U.N. to take a firm stance against these violations that undermine the Geneva Convention and the international human rights system.

"The attacks launched by the coup plotters in Libya last year to overthrow the legitimate Government of National Accord (GNA) have brought only pain and destruction to this country," he stressed.

"The international community couldn't ensure that neither the coup plotters nor their supporters have been made to account for the massacres, human rights violations, and especially for the mass graves in Tarhuna," he said.

Erdoğan also expressed his belief for "a permanent political solution in Libya through an inclusive and comprehensive dialogue conducted by the Libyans."

He also brought up the conflict between Israel and Palestine and called for the reinstatement of 1967 borders, which would allow for an independent and contiguous Palestine.

"The Palestine question can only be solved with an independent, sovereign Palestine with geographical continuity and east Jerusalem as its capital," he said.

"Countries that voice their intention to open an embassy in Jerusalem only serve to further complicate the (Palestine-Israel) conflict," Erdoğan added.

"Turkey will not support any plan that the Palestinian people do not give consent to," he added.

Meanwhile, Israel's U.N. envoy who participated in the U.N. General Assembly in-person meetings walked out of the hall during Erdoğan's address that included harsh criticism of Israel.

The president also highlighted "a problem that threatens humanity, but for some reason is considered invisible."

"Racism, xenophobia, Islamophobia and hate speech have reached an alarming level," he said.

"In the course of the pandemic, acts of violence against vulnerable people, especially migrants and asylum-seekers, accelerated while xenophobia and racism increased," he added.

"Muslims are the most exposed to these dangerous tendencies fueled by prejudice and ignorance," he said.

"Those who are primarily responsible for this dangerous course are politicians who turn to populist rhetoric for the sake of votes, and marginal segments who legitimize hate speech by abusing the freedom of expression," he said.

The president called on all international organizations to take concrete steps in the fight against this behavior.

"I reiterate my call for March 15, the day of the terrorist attack perpetrated in New Zealand against Muslims, to be declared by the United Nations as 'International Solidarity Day Against Islamophobia,'" he said.