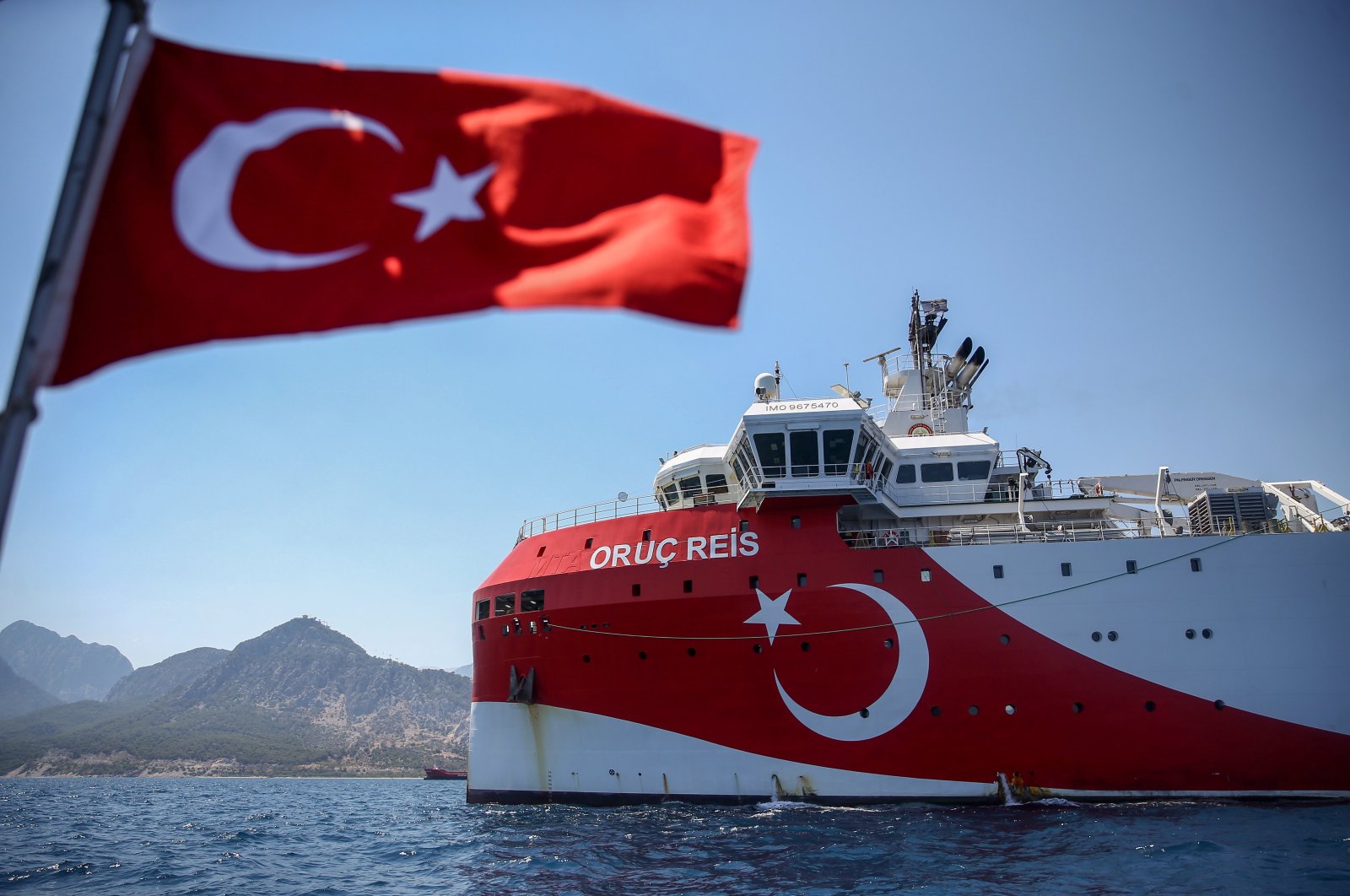 Kalın highlighted that Turkey opposes the rhetoric of threats and favors an equal distribution of resources.

The Greek side's "maximalist" position claims that the island of Kastellorizo (Meis in Turkish)-only 2 kilometers from the Turkish shore, but about 580 km away from the Greek mainland-"should have a 40,000 square km continental shelf area, which is almost like half of Turkey's Gulf of Antalya," Kalın told an online policy briefing by the European Policy Centre in cooperation with the Foreign Economic Relations Board of Turkey (DEIK).

Saying that Turkey does not want any kind of military tension or even political tension in the Eastern Mediterranean, Kalın said Greece's maximalist position is "against logic, against geography, against international agreements.

The Turkish drillship Oruç Reis is not drilling but instead exploring "about 180 km from Meis island, Kastellorizo," said Kalın.

So the Greek reaction was "really an overreaction," he added.

Telling how Turkey and Greece agreed to the continental shelf and maritime borders through negotiated settlements, Kalın reiterated Turkey's willingness to "start exploratory talks with Greece that will include all of these issues, maritime limits, exclusive economic zones, the islands, rock formations, geographical formations that are not listed as islands on which nobody lives, but Greek claims for itself."

Kalın also said the Greek Cypriots use their EU membership as a bargaining chip and a way to pressure Turkey.

"We will never accept the language of threats or sanctions. We're only there to protect our rights. We would like to see an equitable and fair sharing of all the natural resources in the Eastern Mediterranean," he added.

Saying that previously for several years, Turkey had been excluded from all major energy exploration in the Eastern Mediterranean, he said, "any energy pipeline map, anything of the kind without Turkey will not be feasible."

Meanwhile, Greece warned Thursday it will do "whatever is necessary" to defend its sovereign rights in response to neighboring Turkey's plans to proceed with an oil-and-gas research mission south of Greek islands in the eastern Mediterranean.

Greek government spokesman Stelios Petsas described the Oruç Reis mission as a direct violation of Greek sovereignty and that of Greek ally Cyprus.

"The government is underlining to all parties that Greece will not accept a violation of its sovereignty and will do whatever is necessary to defend its sovereign rights," Petsas said.

"It is not acceptable for a Union member state's maritime space to be violated or threatened. Those responsible must be sanctioned," Macron said before talks in Paris with Greek Cypriot leader Nicos Anastasiades at the presidential Elysee Palace.

'Macron trying to assert some sort of leadership in North Africa'

On the crisis in Libya, Kalın said Turkey and Russia just reached an agreement Wednesday "to form a study group to work on a credible and sustainable cease-fire.

"I underlined this word credible and sustainable because many attempts have been made in the past over the last two years or so to reach different forms of cease-fires and to advance the political process, but they all failed," he said.

Kalın noted that Turkey went to Libya at the invitation of the UN-recognized Libyan Government of National Accord "to help them to push back aggressive behavior" by warlord Khalifa Haftar and his forces.

Since April 2019, Haftar's illegitimate forces have launched attacks on the government in Tripoli and other parts of northwestern Libya, resulting in more than 1,000 deaths, including civilian women and children.

Saying "the Haftar backers, which include the United Arab Emirates, Egypt, France, and to a certain extent perhaps Russia and others, are not really helping the peace process there," Kalın added that French President Emmanuel Macron is "trying to assert some sort of leadership in North Africa. The kind of leadership that I believe he doesn't have in Europe at the moment."

"France's support for Haftar also jeopardizes NATO's southern security because there are a number of complicated issues there which I don't want to go into at the moment. But we would like to see the political process move forward," he stressed.

He warned against the crisis in Libya turning into another Syria conflict "where the conflict is no longer about Syria ... we don't want to see a repeat of that in Libya."

Asked about the Egyptian parliament this week greenlighting possible military intervention in Libya, Kalın called this a "very counterproductive" move.

"I believe it would be a dangerous military adventure for Egypt to send troops there, it wouldn't help advance the political process," he added.

Kalın further stressed that Haftar backers "can't push force their way into the Libyan political scene by sending more troops or by sending him more weapons and aircraft, by building up a major military presence."

"We don't want to see any military confrontation or even political tension with any country, including Egypt, Russia, or France," he added.

In its more than 30-year terror campaign against Turkey, the PKK-listed as a terrorist organization by Turkey, the U.S. and EU-has been responsible for the deaths of 40,000 people, including women, children, and infants.

Reaffirming President Recep Tayyip Erdoğan's commitment to Turkey's EU membership process, Kalın said: "I think the main problem in Europe is a lack of visionary leadership. If you look at the map, you're bound together geographically, historically, culturally, more so than any other country."

A large number of PKK and FETÖ terrorists are taking shelter in European countries, he said, adding: "They are using the system to their advantage against us and poisoning relations between Turkey and a number of European countries. They do this in the United States as well."

Kalın urged that "old ideological political prejudices" be put aside in favor of a "focus on a common positive agenda and producing a strong wider, deeper, strategic leadership vision that will turn our entire region into a regional peace, prosperity, and safety for all."

He again reiterated Turkey's openness to "constructive ideas," whether regarding conflict in the Eastern Mediterranean or Turkey's EU membership bid.

"We would like to finish the negotiations on the Customs Union [with the EU], update the Customs Union, we would like to get the Schengen visa resolved, so that Turkish citizens can travel to Europe, like many other country citizens," he said, touching on two issues supposed to be resolved under the 2016 Turkey-EU migrant deal, but Turkey says the EU failed to keep its promises.

"We would like to see an updating of the Turkey-EU migration deal so that we can deal with the migration issue in a fair way," he added.