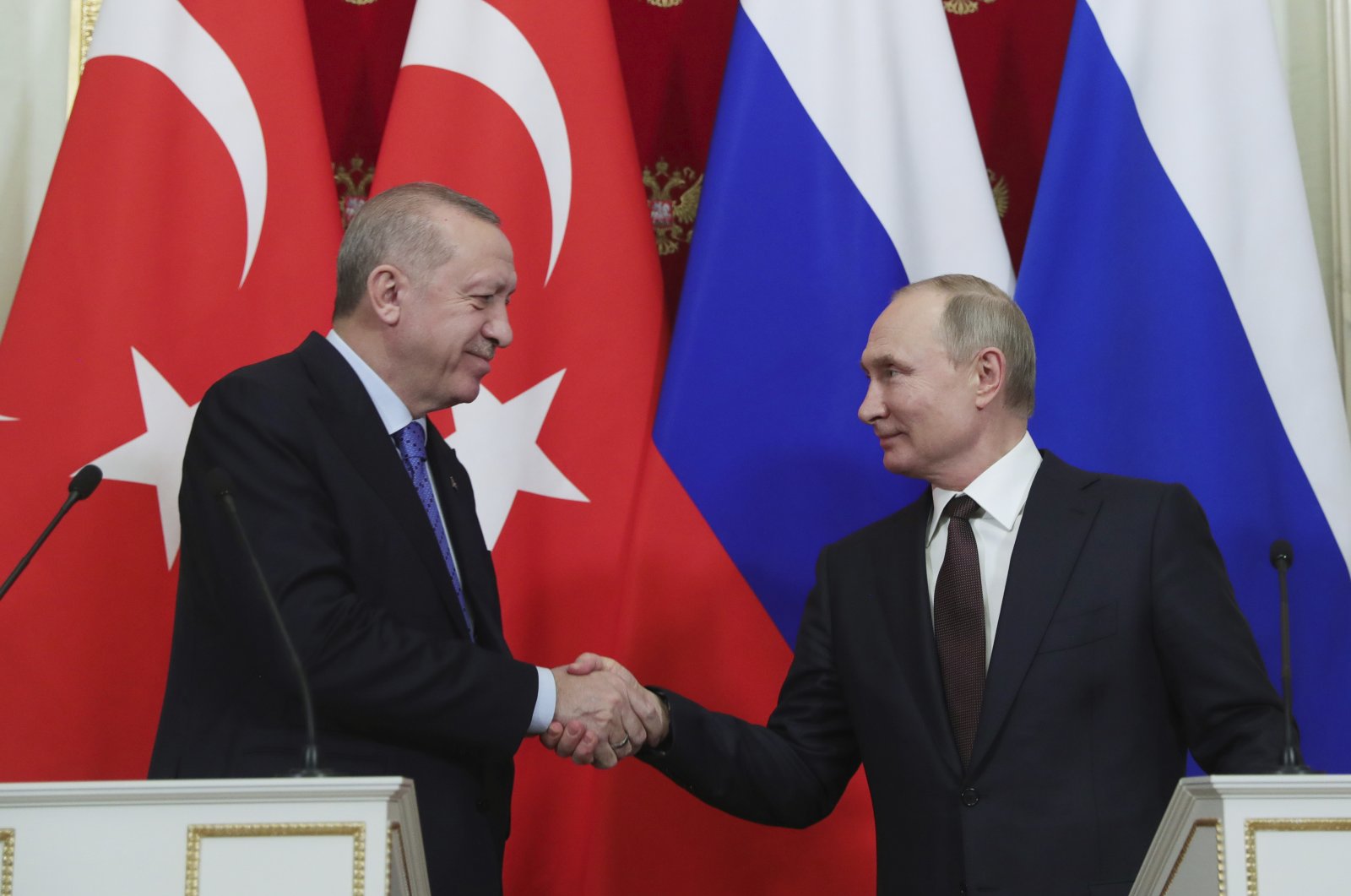 After weeks of tension, Turkey and Russia agreed on Thursday to continue their cooperation in the northwestern Syrian province of Idlib, declaring a cease-fire while expressing an intention to provide a new status quo for the war-torn province.

Turkey and Russia have reached the agreement during a meeting between President Recep Tayyip Erdoğan and his Russian counterpart Vladimir Putin in Moscow.

The cease-fire was expected to begin at midnight Friday, leading to a new status quo in Idlib.

Speaking in a joint press conference, Erdoğan said the Syrian regime and its aggressiveness are the main reasons behind civilian suffering in Idlib.

“Considering all the recent developments, a new status quo is inevitable in Idlib,” he added.

“We have deployed additional military units to Syria to ensure regional stability. Our priority is to enable de-escalation in Idlib. The cease-fire in Idlib will begin tonight a minute after midnight,” he also said.

Putin said: “We have always solved our problems by working together. Today was no different.”

Underlining attacks in Idlib must stop, Putin added: “We agreed to continue the will and conditions of the Astana deal. We have prepared a document as a result of today’s meeting, hoping that it will put an end to civilian suffering in Idlib.”

Following the joint news conference by Erdoğan and Putin, Turkish Foreign Minister Mevlüt Çavuşoğlu and his Russian counterpart Sergey Lavrov announced additional protocol to the memorandum on stabilization of the situation in Idlib.

The protocol call for parties to "cease all military actions along the line of contact in the Idlib de-escalation area starting from 00:01 of March 6, 2020."

The two countries reaffirmed their strong commitment to the sovereignty, independence, unity and territorial integrity of Syria.

They also "reaffirmed their determination to combat all forms of terrorism and to eliminate all terrorist groups in Syria as designated by the U.N. Security Council, while agreeing that targeting of civilians and civilian infrastructure cannot be justified under any pretext."

The protocol highlighted that there can be "no military solution to the Syrian conflict and that it can only be resolved through a Syrian-led and Syrian-owned, U.N.-facilitated political process in line with the UNSC Resolution 2254."

It also added that both sides "stressed the importance of prevention of further deterioration of humanitarian situation, protection of civilians and ensuring humanitarian assistance to all Syrians in need without preconditions and discrimination as well as prevention of displacement of people and facilitation of safe and voluntary return of refugees and internally displaced persons to their original places of residence in Syria."

A security corridor will be established 6 kilometers (3.7 miles) deep to the north and to the south from the M4 highway, according to the protocol.

"The specific parameters of the functioning of the security corridor will be agreed between the defense ministries of Turkey and Russia within seven days," it noted.

Joint Turkish-Russian patrols will begin on March 15 along the M4 highway from the settlement of Trumba – 2 kilometers (1.2 miles) to the west of Saraqib – to the settlement of Ain-Al-Havr, the protocol also said.

The meeting came amid growing tension in northern Syria’s Idlib province, where the Russia-backed Bashar Assad regime's offense has targeted civilians and Turkish soldiers, raising the prospect of a direct clash between Russian and Turkish forces.

The nearly three-hour-long summit between the two presidents was followed by an inter-delegation meeting for more than two and a half hours.

In Russia, Erdoğan was being accompanied by Foreign Minister Mevlüt Çavuşoğlu and Defense Minister Hulusi Akar, among other high-profile government representatives.

Both leaders underlined the need to reach an agreement at the start of the Kremlin talks.

In his opening remarks at the Kremlin, Putin had thanked Erdoğan for accepting his invitation for talks on the recent escalation.

"Thank you for coming. There is always something to talk about, but now the situation in a well-known area – Idlib – has escalated so much that it requires our direct, personal conversation," he said, offering his condolences over the fallen soldiers.

"The loss of life is always a great tragedy. Unfortunately, as I told you on the phone, no one, including the Syrian military, knew about their (Turkish soldiers) whereabouts," he added.

Putin went on to say that the Syrian regime forces have suffered great losses in Idlib, the last opposition stronghold in Syria.

"We need to talk about the situation that has developed to date so that nothing like this happens again, and so that it does not destroy the Russian-Turkish relations, which I, and as I know, you too, treat very carefully," he said.

Erdoğan said the decisions taken at the meeting will ease tensions in the region and in Turkey.

Erdoğan had said on Wednesday that he expected his talks with Putin to lead to a rapid cease-fire in northwest Syria.

The two leaders were set to discuss the recent developments in Syria, including cease-fire violations in the Idlib de-escalation zone.

However, the incident that acted as a tipping point in regional tension was the killing of more than 34 Turkish soldiers in regime attacks last month. In response, Ankara launched Operation Spring Shield against regime targets in Idlib.

The relationship has been strained in recent days, with the two sides trading accusations of violating the Sochi deal, which created a buffer zone and allowed for the deployment of 12 Turkish observation posts.

Last October, they reached an agreement to deploy their forces across Syria's northeastern border to fill the void left by President Donald Trump's abrupt withdrawal of U.S. forces. Prior to that, they had negotiated a series of accords that saw opposition fighters from various areas in Syria move into Idlib and in 2018 carved out a de-escalation zone in Idlib.

Turkey has sent thousands of troops into Idlib to repel the Syrian regime army while Russia, which has helped Assad reclaim most of the country’s territory, has signaled it wouldn't sit idle to see Turkey rout his troops.

The Turkish defense ministry said in the last 24 hours it had destroyed four tanks, five rocket launchers and a dozen military vehicles in artillery and airstrikes.

The Syrian regime's attempt to take Idlib has forced close to a million civilians to flee their homes and prompted Erdoğan to open Turkey's border with Greece to refugees and migrants.

Turkey hosts some 3.6 million Syrian refugees and says it cannot handle more. Erdoğan warned Europe on Wednesday that it must support Turkey's "political and humanitarian solutions in Syria" if it wants to avoid a repeat of the 2015 migration crisis.

Ankara wants Assad's forces to cease their assault on the province and pull back behind lines agreed under a 2018 deal with Russia brokered in Sochi.