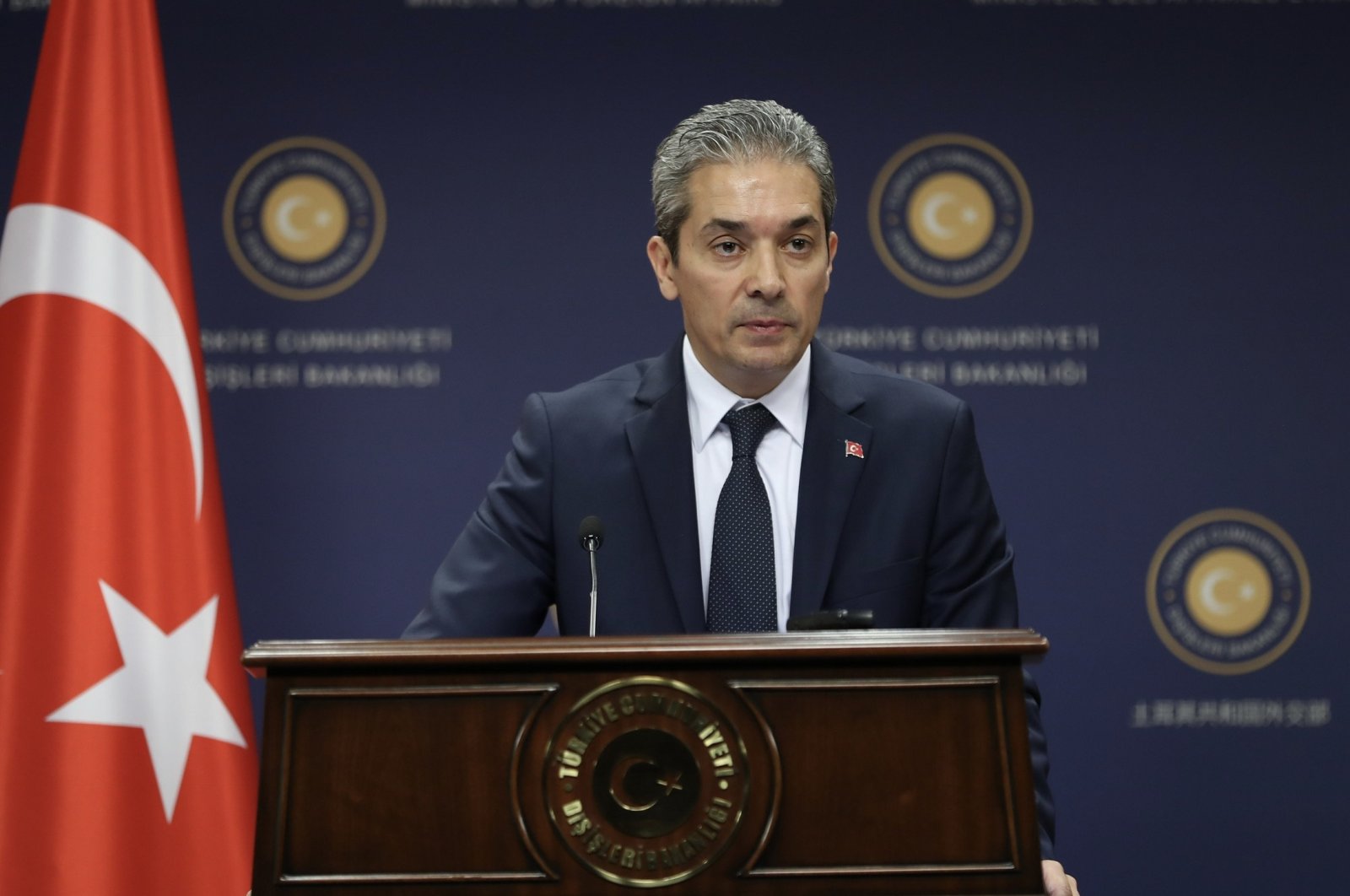 Turkey will not be threatened by sanctions and this discourse will yield no results, Foreign Ministry spokesperson Hami Aksoy said Friday, in response to recent comments made by French President Emmanuel Macron.

"France should give up on delusions of grandeur and instead pursue rational policies based on common sense," Aksoy said in a statement.

Macron called for Turkey to be "sanctioned" and accused Ankara of "violating" the European Union's territorial waters due to hydrocarbon exploration activities in the Eastern Mediterranean.

"It is not acceptable for a (European) Union member state's maritime space to be violated or threatened. Those responsible must be sanctioned," Macron said earlier this week before talks with Greek Cypriot leader Nicos Anastasiades in Paris.

Aksoy said France keeps losing impartiality and its chance to contribute to regional stability with "every wrong step she has taken on the latest developments in the Eastern Mediterranean."

"Each step taken by Turkey in the Eastern Mediterranean aims to defend the legitimate rights and interests of Turkey and the Turkish Cypriots on the basis of international law," Aksoy noted.

The remarks came after Turkey’s navy on June 21 issued an advisory, known as NAVTEX, for seismic surveys by Oruç Reis and two support vessels in waters south of the Greek islands of Rhodes, Karpathos and Kastellorizo (Meis in Turkish, Megisti in Greek) through Aug. 2.

Speaking on the issue, the ruling Justice and Development Party (AK Party) spokesman Ömer Çelik said Thursday that Macron would do better to put his own country back on track before trying to give lessons to Turkey.

Çelik said Macron is again in the wrong by supporting the Greek Cypriot administration's unfair and unlawful activities in the Mediterranean – trying to halt Turkey’s legal energy exploration.

"He is making the same mistake in the Eastern Mediterranean he made in Libya. He recently claimed that a Turkish warship harassed a French ship and his claim was disproved," he added.

Kalın highlighted that Turkey opposes the rhetoric of threats and favors an equal distribution of resources. "The Greek side's 'maximalist' position claims that the island of Kastellorizo – only 2 kilometers from the Turkish shore, but about 580 km away from the Greek mainland – should have a 40,000 square kilometer continental shelf area, which is almost half of Turkey's Gulf of Antalya," he said.

He stressed that Turkey does not want any kind of military tension or even political tension in the Eastern Mediterranean. Greece's maximalist position is "against logic, against geography and against international agreements," he said.

Ankara had last year sent drilling vessels to the Eastern Mediterranean to assert Turkey's and the Turkish Republic of Northern Cyprus' (TRNC) rights to the resources in the region. The areas fall entirely within the Turkish continental shelf registered with the U.N. and in permit licenses that the Turkish government granted to the state-owned Turkish Petroleum Corporation (TPAO).

Aksoy also called on France to quit backing putschists in Libya and support the country's U.N.-recognized Government of National Accord (GNA).

"With regard to Libya, France is expected to differentiate between the legitimate government, recognized by the international community, on the basis of U.N. resolutions and the aggressor who is trying to topple for over a year now this legitimate government by capturing the capital," he said.

Regarding France’s support to Libyan putschist Gen. Khalifa Haftar against the legitimate government, Kalın said "France's support for Haftar also jeopardizes NATO's southern security because there are a number of complicated issues there which "I don't want to go into at the moment. But we would like to see the political process move forward."

Ankara supports GNA in the conflict against Haftar’s illegitimate forces. Under a military pact with Libya signed last November, Turkey sent military advisers to assist in the battle against Haftar's forces.

Haftar is being backed by Egypt, Russia, France and the United Arab Emirates (UAE).

On Nov. 27, Ankara and GNA signed two separate pacts, one that encompasses military cooperation and the other the maritime boundaries of the two countries in the Eastern Mediterranean.

The maritime pact, effective from Dec. 8, asserts Turkey's rights in the region in the face of unilateral drilling by the Greek Cypriot administration, clarifying that the TRNC also has rights to the resources in the area.