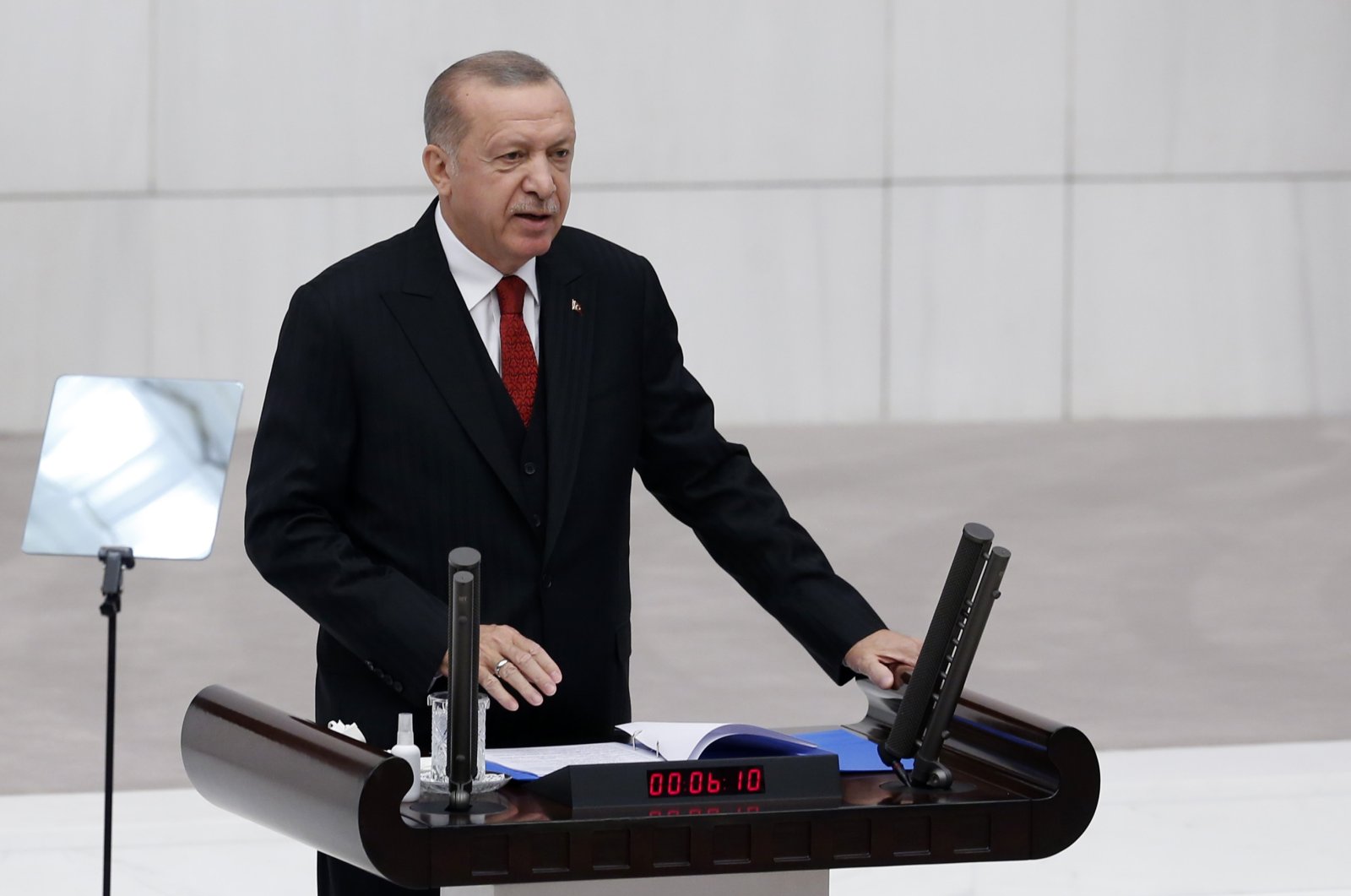 President Recep Tayyip Erdoğan on Thursday reiterated Turkey’s support for Azerbaijan and the country’s determination to continue to lend a hand to the oppressed people in the region.

Speaking at the inauguration ceremony of the fourth legislative session of the Turkish Parliament in the capital Ankara, Erdoğan said that Turkey sides with Azerbaijan in their struggle against the Armenian occupation of Nagorno-Karabakh.

He criticized the Minsk trio, which consists of the U.S., France and Russia, for making cease-fire calls as he said it was too late after decades of Armenian occupation.

“The Minsk trio consisting of the U.S., Russia and France making cease-fire calls after years of ignorance does not make sense. Occupiers need to leave the land they’re occupying first,” Erdoğan said, in reference to Armenian occupiers in the Nagorno-Karabakh region.

“Permanent peace in the Nagorno-Karabakh region will only be possible if Armenia leaves the Azerbaijani lands it has been occupying,” the president said.

The president also said supporters of the “rogue state” would be “held accountable,” as he said Armenia’s slander against Turkey will not save it.

The Organization for Security and Co-operation in Europe (OSCE) Minsk Group – co-chaired by France, Russia and the U.S. – was formed in 1992 to find a peaceful solution to the conflict, but to no avail. A cease-fire, however, was agreed upon in 1994. France, Russia and NATO, among others, have urged an immediate halt to clashes in the occupied region.

Regarding tensions in the Eastern Mediterranean, Erdoğan said Turkey prioritizes a resolution based on the fair sharing of resources.

“I urge all countries to support our struggle for peace,” he said.

The president criticized the insufficiency of the European Union in finding a solution to the problem.

“Being captivated by the spoiled demands of Greece and the Greek Cypriot administration, the EU has now turned into an inefficient institution,” Erdoğan said, adding that Turkey was left with no other alternative but to find its own solution to secure its rights in the Eastern Mediterranean.

“It’s up to Greece and the Greek Cypriot administration to either ease the tension through dialogue or fuel the conflict,” he said.

Touching upon instability in the Middle East, Erdoğan said Turkey has been seriously affected by conflicts in the neighboring countries.

“The instability that has been ongoing in Iraq since the Gulf War has damaged Turkey the most since the PKK had the chance to flourish in the country,” he said.

Turkey regularly conducts cross-border operations targetting PKK hideouts and bases in northern Iraq, from which they carry out attacks in Turkey.

The PKK terrorist group managed to establish a foothold in Sinjar in mid-2014, on the pretext that it was protecting the local Yazidi community from Daesh. Since then, the PKK has reportedly established a new base in Sinjar for its logistical and command-and-control activities. Turkey has long been stressing that it will not tolerate threats posed to its national security and has called on Iraqi officials to take the necessary steps to eliminate the terrorists. Ankara previously noted that if the expected steps were not taken, it would not shy away from targeting the group. Iraq’s Kurdish Regional Government (KRG) also previously called the PKK’s presence in Sinjar unacceptable and urged the militants to leave the area.

Erdoğan continued by noting that Turkey has been hosting more than 3.5 million Syrians who fled the war and will continue to do what it takes to provide security on its borders against terrorist threats from Syria.

“Turkey will continue to be a safe haven for the victims of war and terrorism,” he said, adding that the fact that 411,000 displaced Syrians returned to their hometowns as a result of Turkey’s cross-border counterterrorism operations proves that Turkey has been on the right path in Syria.

"We will continue to carry out our operations until the last terrorist is destroyed," he said.

Syrians displaced in several regions either by terrorist organizations or the assaults of the Bashar Assad regime, have sought refuge in Turkey. Nearly 1 million had fled from Syria’s northwestern Idlib province when the regime in December intensified its attacks to regain the last opposition bastion. After the surge of violence decreased following a Turkey-Russia brokered cease-fire in the region, many people started to return to the province.