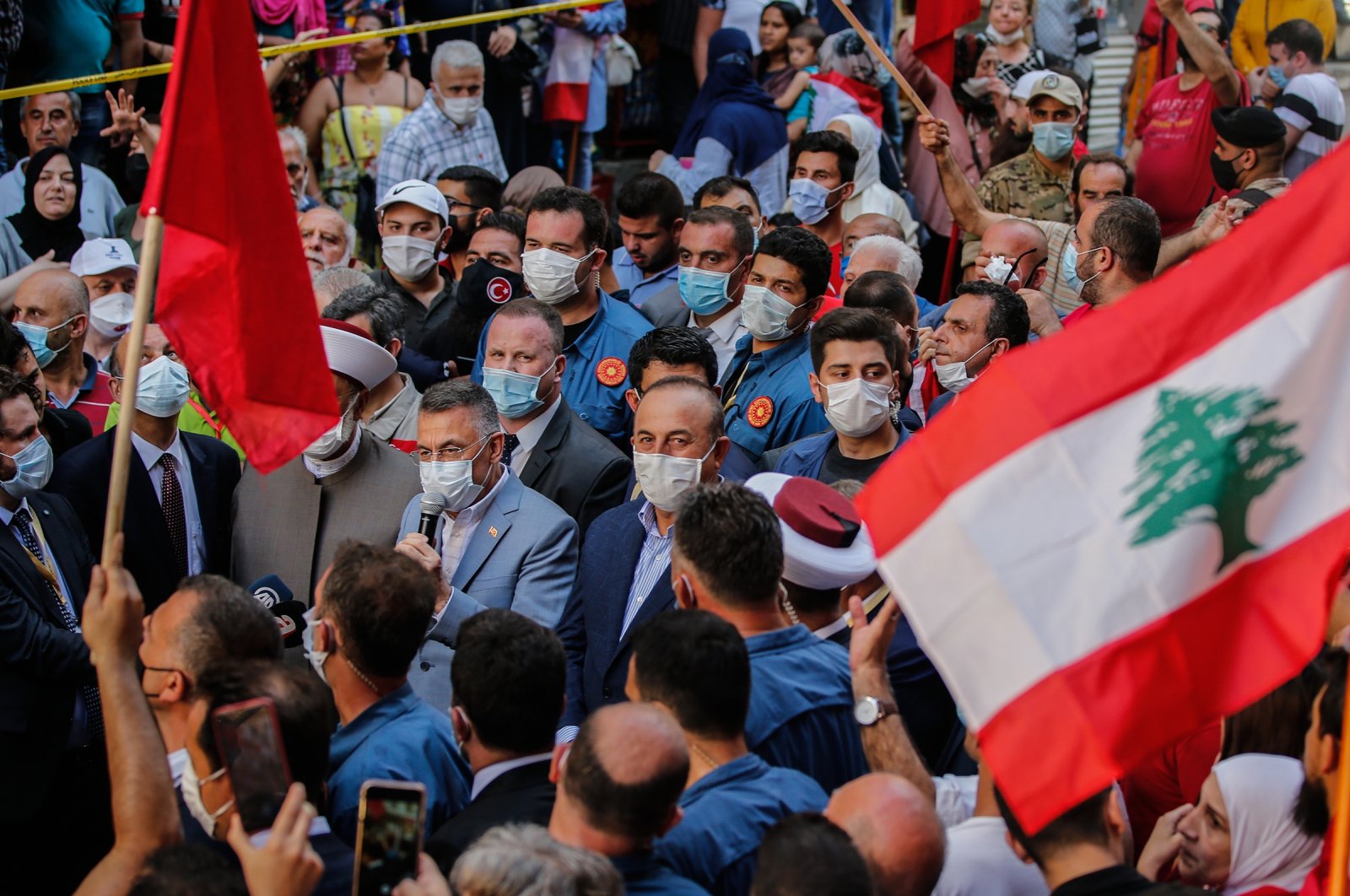 Officials from Ankara, during a visit to the devastated city, underlined the two nation's historical, cultural and friendly ties while pledging to do whatever is necessary for the Lebanese people to recover and reconstruct their country

The relations between Turkey and Lebanon go beyond being neighbors and include ties of amity and brotherhood, Vice President Fuat Oktay said Saturday. He added that Turkey will help bandage the wounds from the deadly Beirut blast that shook the country recently.

“The Port of Beirut is making up a huge part of Lebanon’s trade and is its backbone. It is not likely that Lebanon will recover their trade and economy without this port,” Oktay pointed out, reminding that Turkey had told Lebanon that it can use the Port of Mersin, on the Mediterranean coast, as well as the Iskenderun port for customs clearance and warehousing until Beirut port is rebuilt. “Our offer was welcomed warmly,” Oktay said responding to members of Turkish press, accompanying him during the visit. He added that both sides would continue to be in contact for further needs and in the case of a request from the Lebanese side.

Turkish Foreign Minister Mevlüt Çavuşoğlu also accompanied Oktay during the visit, where both officials expressed Ankara's solidarity with the country.Oktay stated that the Lebanese president, the head of the assembly and the prime minister experienced a flood of emotions during the Turkish visit. “We see an enthusiastic love of (Turkish President) Recep Tayyip Erdoğan and Turkey. This is not a love based on interests but rather a reciprocal feeling – a feeling of a family that lived together for 400 years,” Oktay stated, indicating that the problems of the two Mediterranean countries are related.

"The Port of Beirut makes up a huge part of Lebanon’s trade and is its backbone. It is not likely that Lebanon will recover their trade and economy without this port," Oktay pointed out, reminding that Turkey had told Lebanon that it can use the Port of Mersin, on the Mediterranean coast, as well as the Iskenderun port for customs clearance and warehousing until Beirut port is rebuilt. "Our offer was warmly welcomed," Oktay said, adding that both sides would continue to be in contact for further needs and in the case of a request from the Lebanese side.

During their visit, Oktay and Çavuşoğlu said all of Turkey's hospitals and air ambulances would remain at Lebanon's service, as the country deals with the devastating fallout of Tuesday's massive blast at the Port of Beirut. Oktay also announced that officials have offered Turkish air ambulances to transport injured Lebanese citizens to Turkey for treatment.

A Turkish medical team, as well as a search and rescue team, were dispatched by the Turkish authorities immediately after the blast and have been helping with the recovery efforts since.

After a meeting with Lebanese President Michel Aoun, Oktay and Çavuşoğlu also met Lebanese Prime Minister Hassan Diab, who took them to the site of the explosion. They also visited the Lebanese parliament, where they met Speaker Nabih Berri.

"If you are united, we are ready to give you all kinds of support as Turkey. The port of Beirut will recover. If the Saida hospital and energy are needed, we can open our experience with the build, operate, transfer model, we said,” Oktay said.

Turkey was one of the first countries to come to Lebanon's aid after the 2006 war between Lebanon and Israel by transferring $20 million worth humanitarian aid through nongovernmental organizations (NGOs). Turkey has always attached importance to the stability, security and prosperity of Lebanon.

During the Stockholm donors' conference of 2006 after the war and the Paris III donor conference held in 2007, Turkey pledged aid of $30 million to the country. Within the scope of Lebanon’s reconstruction works, Turkey has established 37 prefabricated schools and five children’s playgrounds through the Turkish Red Crescent (Kızılay). Furthermore, with the Disaster and Emergency Management Authority (AFAD) starting the construction of another 20 schools, the number of prefabricated schools donated by Turkey reached 57.

Moreover, the state-run Turkish Cooperation and Coordination Agency (TIKA) opened an office in Beirut in 2014, through which it coordinated projects in various fields ranging from education and health to the restoration of historical sites per the demands of the local people.

The Saida hospital, which was constructed by TIKA and opened by President Recep Tayyip Erdoğan and then-Lebanese Prime Minister Saad Hariri in 2010, could not be opened due to bureaucratic reasons. Turkey also reaches out to the Syrian refugees and Turkmen in the country through constant food and health aid.

‘Aid no int’l competition for Turkey’

Oktay further underlined that Turkey does not view humanitarian and development aid as an international competition and that Ankara does not act out of self-interest.

"Turkey’s relations were never based on colonialism or exploiting the resources of others. This is also the case here: We have a win-win relation," Oktay said, indicating that Turkey sees one country when it looks to Lebanon without differentiating between its Shiites, Sunnis or Christians, "We do not approach the issue based on ethnicity and religions as France and other countries do."

Oktay elaborated that authorities voiced their desire for structural reforms during the talks as the country has entered significant economic troubles. "However, there is a systematic problem in putting the reforms into practice. The fact that structures that ought to act as one together with the Taif Agreement cannot do so and the chaos of authority and responsibility lead to inconclusive results in reforms and hinder meeting the demands of change.

The Taif Agreement, which ended the 1975-1990 Lebanese civil war, accepted the consociational model and sought to establish parity between Muslims and Christians as well as shifting executive power from the president to the prime minister.

Oktay conveyed that the Lebanese head of assembly expressed his wishes for the opening of the Saida hospital and that the Burn and Trauma Center, which needed much assistance during these times, could not be opened to service due to problems within Lebanon. The vice president stated that on Monday, TIKA representatives will have contact with the Turkish ambassador in Lebanon and the relevant ministries to accelerate the hospital’s opening.

Çavuşoğlu for his part stressed that the people are disturbed by the internal political clashes and wish to work with Turkey for the reconstruction of the capital.

According to Lebanon's health ministry, at least 158 people died and over 6,000 were injured in Tuesday's explosion, which ravaged a large section of the Lebanese capital. The numbers, though, are likely to rise as search and rescue efforts continue.

The explosion of thousands of tons of ammonium nitrate stored at the port, apparently set off by a fire, was the biggest in Lebanon’s history and caused an estimated $10 billion-$15 billion's worth of damage, according to Beirut’s governor. Meanwhile, hundreds of thousands of people have been left homeless.

Documents that surfaced after the blast showed that for years officials had been repeatedly warned that the presence of 2,750 tons of ammonium nitrate at the port posed grave public danger, yet no one acted to remove it. Officials have been blaming one another since the incident, and 19 people have been detained including the port’s chief, the head of Lebanon’s customs department and his predecessor.

Regarding the maritime deal signed by Egypt and Greece on Thursday which ignores the rights of Turkey, Libya as well as Turkish Cypriots in the eastern Mediterranean, Çavuşoğlu said with this deal everyone saw Greece was ill-intentioned and that Turkey was right in its claims that Athens did not seek constructive dialogue.

Reminding that Turkey and Libya already had an existing maritime deal approved by the governments of both countries and registered by the United Nations, Çavuşoğlu said: "The Greece-Egypt deal is not such a deal. When we heard of the deal, we were in a meeting with European Union Foreign Policy Chief Josep Borrell and Maltese Foreign Minister Evarist Bartolo and that Borell "was surprised while Germany reacted similarly."

Egypt and Greece had been in talks for a while after Turkey and Libya on Nov. 27, 2019, signed two separate pacts – one on military cooperation and the other on maritime boundaries of countries in the Eastern Mediterranean. The Greece-Egypt deal leaves Turkey only a little space in the Eastern Mediterranean and is based on the assumption that Rhodes and Kastellorizo (Megisti-Meis), one of the smallest Greek islands in the Aegean Sea and only 2 kilometers (1.24 miles) away from the Turkish coast do have the right of exclusive economic zones (EEZ).

"They (Greece and Egypt) have been negotiating for 15-10 years. In fact, we have to see the whole map, yet we believe that it did not enter our continental shelf considering that of Egypt’s. It could have coincided with that of Libya. Even former Greek ministers contested the deal," the foreign minister elaborated, saying that Turkey will show its reaction both in the field and at the table.

"We have expressed that we are ready for dialogue with Greece. Yet with this move, Greece has proved it does not want to be part of this process. The fact that this process and the recent deal coincided at the same time, showed that Greece ignores the rights of other countries," Çavuşoğlu said. The top diplomat added that Turkey showed goodwill but did not see anything in return by the Greek side.