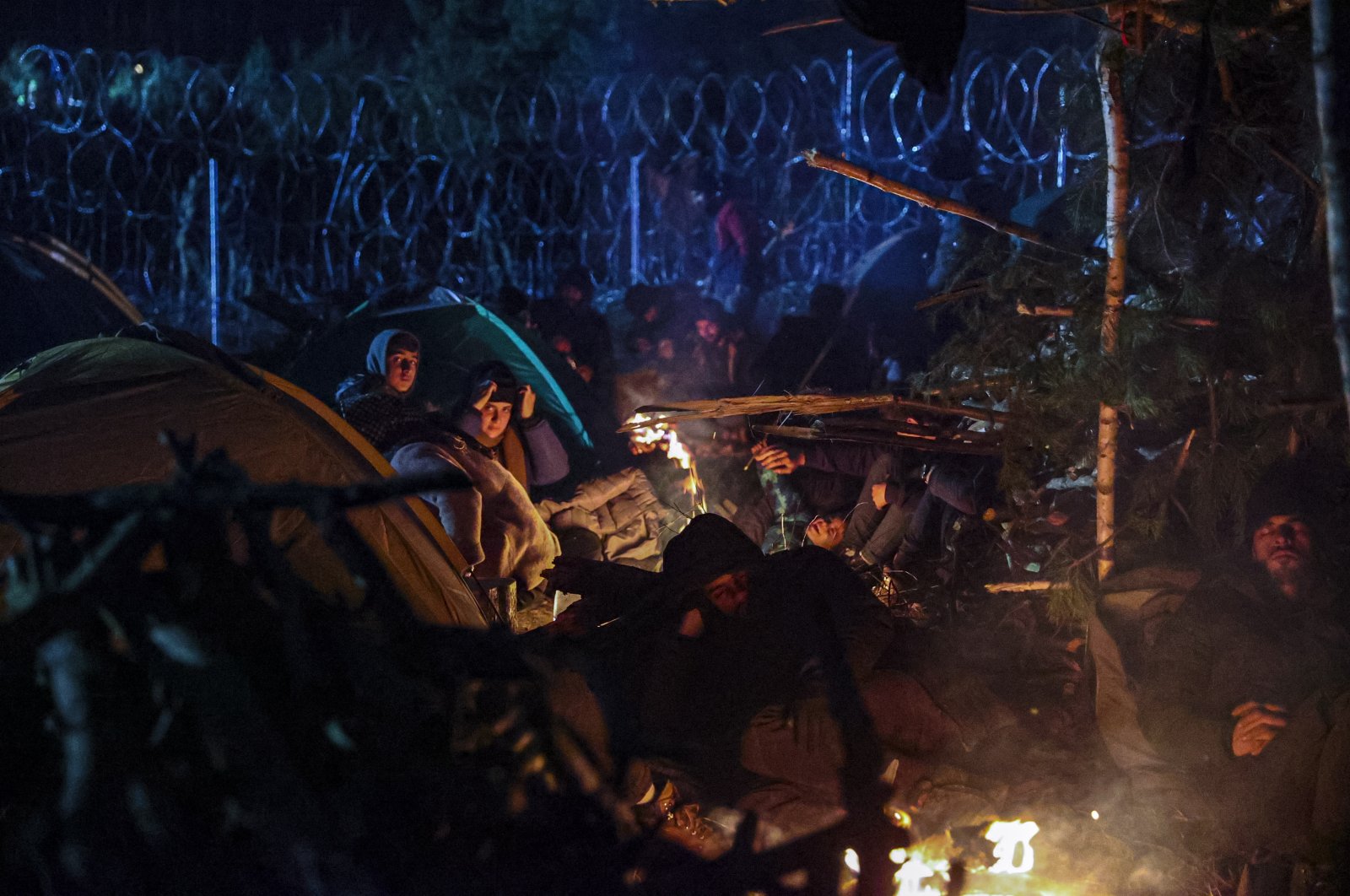 Migrants warm themselves in their camp at the Belarus-Polish border in the Grodno region, not far from the checkpoint Bruzgi, Belarus, Nov. 11, 2021. (EPA Photo)
by Daily Sabah with Reuters Nov 12, 2021 11:09 am
RECOMMENDED

Turkey will no longer allow citizens from Syria, Yemen and Iraq to buy flight tickets from the country to Minsk amid a migrant standoff between Belarus and the European Union, Turkey's Civil Aviation General Directorate (SHGM) said on Friday.

"In relation to the illegal border crossing problem between the European Union and Belarus, it has been decided for citizens from Iraq, Syria and Yemen wanting to travel to Belarus from our country's airports not to be sold tickets and not to be allowed on planes," the SHGM said on Twitter.

Belarusian state-owned airline Belavia also announced Friday that it will no longer allow citizens of Iraq, Syria and Yemen to board flights from Turkey at the request of Turkish authorities.

"In line with a decision by the ... Turkish authorities, citizens of Iraq, Syria, Yemen will not be accepted for transportation on flights from Turkey to Belarus from 12.11.2021," it said in a statement on its website.

Later in the day, the EU chairperson, Charles Michel, thanked Turkey for what he said was an agreement to stop citizens of Iraq, Syria and Yemen planning to travel to Belarus from buying tickets or boarding at Turkish airports.

"Thank you to the Turkish authorities," Michel said on Twitter.

Michel made reference to the official Twitter account of the SHGM, saying that a decision had been taken to resolve "the problem of illegal border crossings between the European Union and Belarus."

It said the decision to deny tickets and boarding was "until further notice."

EU says Belarus is encouraging thousands fleeing war-torn parts of the world to try to cross its borders and may impose new sanctions on Belarus and airlines ferrying the migrants as soon as Monday.

The bloc has accused Belarus of mounting a "hybrid attack," while Kremlin ally Belarus has warned the crisis could escalate into a military confrontation.

Belavia, which is barred from flying over the EU after the grounding of a plane earlier this year, continues to fly to destinations like Egypt, Jordan, United Arab Emirates (UAE), Armenia, Georgia, Azerbaijan, Uzbekistan and Kazakhstan.

Turkey and its flag-carrier Turkish Airlines (THY) have been accused of contributing to the migrant flow, an accusation it has rejected.

The decisions came after the Turkish Foreign Ministry on Thursday rejected efforts to "portray Turkey as part of the problem" in the migrant crisis along the Poland-Belarus border.

Turkey on Thursday reiterated its support for Poland, Latvia and Lithuania amid the refugee flux on their borders with Belarus.

"We are saddened to see that necessary measures are not taken in terms of the illegal passing of third-country citizens to our allies Poland, Lithuania and Latvia through Belarus soils and they are left in harsh conditions on border regions," the Turkish Foreign Ministry said in a statement.

This "multidimensional problem" could erode the international refugee protection regime that draws on the Geneva Convention, the ministry said, noting that the latest developments were transpiring amid the 70th anniversary of the convention relating to the status of refugees.

Stressing that Turkey has been hosting the highest number of refugees in the world for the last 10 years, it reiterated that the country "gives full support to its allies, as a country that understands the challenges Poland, Lithuania and Latvia have been exposed to."

However, it said that Turkey refused to be "portrayed as part of a problem" to which it is not a party.

"We find it to be intentional that a globally prominent company like Turkish Airlines is targeted even though information on this issue is shared transparently," the ministry said.

"Turkey emphasizes the importance of taking the necessary steps for the fight against irregular migration and human trafficking on every occasion and calls for the international community to be responsible and sensible towards this issue," it added.

The ministry also said that Turkey hopes that the concerned parties solve the issue "in moderation," emphasizing that Ankara is ready to "give all necessary support in order to overcome this issue."

Turkey already hosts over 4 million refugees, more than any country in the world, and has enhanced security measures on its borders to humanely prevent a fresh influx of migrants.

Turkey has been falsely portrayed to have played a part in the migrant crisis on the Poland-Belarus border, Foreign Minister Mevlüt Çavuşoğlu also told his Polish counterpart on Wednesday.

In a phone call, the Turkish and Polish foreign ministers discussed the migrant crisis at the Poland-Belarus border.

According to Turkish diplomatic sources, Çavuşoğlu told Zbigniew Rau that attempts are being made to make it seem as if Turkey is part of the problem when in reality it is not involved in the matter.

He expressed his regret over the "baseless allegations against Turkey and Turkish Airlines" and added that Ankara rejects the claims.

On Tuesday, the Turkish flag carrier rebuffed allegations that THY was flying migrants to Belarus amid the crisis on the border.

Denying the "baseless" claims, the airliner said the THY flights to Belarus are in no way aiding illegal immigration traffic.

Poland and the EU have accused Belarusian President Alexander Lukashenko of trying to retaliate against EU sanctions by deliberately inviting and forcing migrants toward the Polish border.

EU countries bordering Belarus – Lithuania, Latvia and Poland – have reported a dramatic spike in the number of irregular crossings since August.

NATO and the EU consider Belarus' approach toward migrants an effort to destabilize and undermine security in the bloc through nonmilitary means.

According to the latest EU figures, 7,935 people tried to enter the bloc via the Belarus-EU border so far this year, up sharply from just 150 last year.

On Monday, Polish authorities stepped up border protection and mobilized more than 12,000 troops after a large group of migrants started marching toward the country's frontier with Belarus accompanied by the Belarusian military.